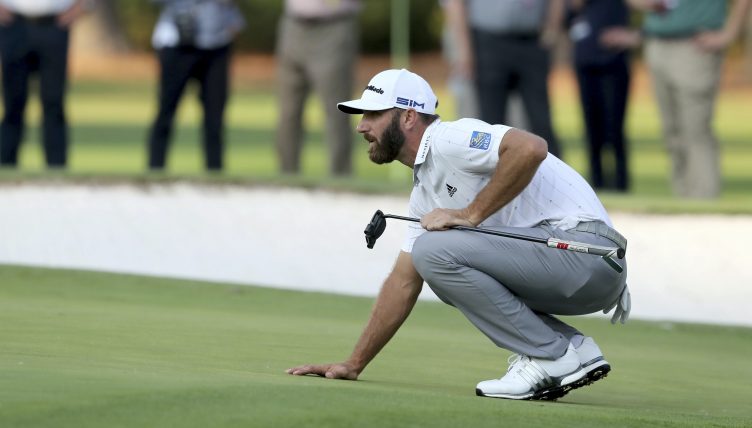 Dustin Johnson had a place in the record books and a second major title in his sights as he took a commanding lead into the final round of the 84th Masters.

The world number one fired an eagle and five birdies in a flawless third round of 65 at Augusta National to finish 16 under par and match the 54-hole scoring record set by Jordan Spieth in 2015.

A closing 69 or better would see Johnson surpass the 72-hole record of 18 under, shared by Spieth and defending champion Tiger Woods, who was the last world number one to win the Masters in 2002.

Australia’s Cameron Smith, Mexico’s Abraham Ancer and Korea’s Sungjae Im were Johnson’s nearest challengers on 12 under, with Ancer and Im attempting to become the first players to win the green jacket on their tournament debut since Fuzzy Zoeller in 1979.

Golf Channel analyst Brandel Chamblee detailed Rahm’s unusual par on the 15th in round two, the Spaniard chipping in for par after opting not to go for the green in two, then hitting his third shot over the green and leaving his first pitch short of the putting surface.

Bryson DeChambeau gave an interesting explanation for dropping shots on the 17th and 18th in his second round, an interesting one in the slot NetBet odds too.

Dustin Johnson’s eagle on the second in round three was not captured by the television feed, but Matt Wallace’s from earlier in the day was not a bad substitute.

Dustin Johnson began the third round tied for the lead but separated himself from the pack with a stunning 65.

Tiger Woods fans could dare to dream thanks to this strange coincidence, but his chances of a successful title defence disappeared with a third round of 72.

The par-five second hole was again the easiest, playing to an average of 4.533 thanks to two eagles and 29 birdies.

The 18th played as the toughest hole with an average of 4.383, yielding just four birdies, 21 bogeys and three double bogeys.

Dustin Johnson’s chances of a second major title as he opened up a commanding lead.

Jon Rahm’s mood after the combustible Spaniard struggled to a third round of 72, which included a seven on the eighth.