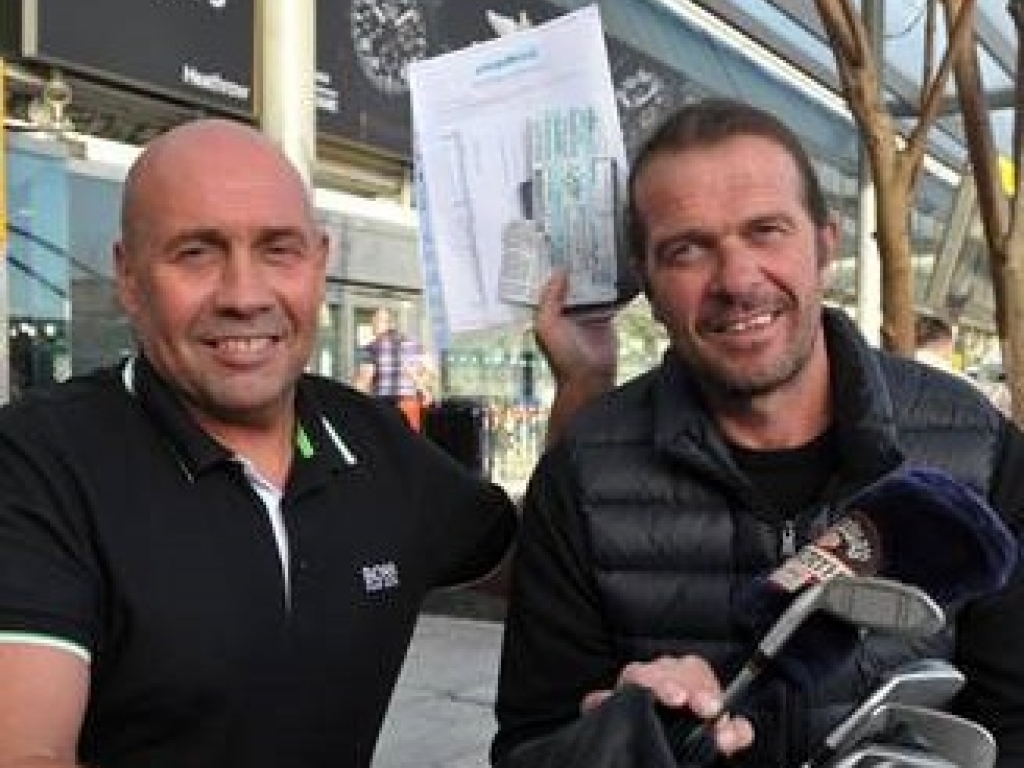 Two lucky golfers are packing their bags and heading to Augusta to watch the Masters after winning a dream trip thanks to Million Dollar Hole in One (MDHIO).

MDHIO, working in partnership with YourGolfTravel, offered players the chance to enter a prize draw to win an all-expenses paid trip to watch the first Major of the year.

Golfers pay €10 each to enter a par-three hole-in-one challenge at MDHIO’s associated courses across Europe, and the chance to shoot for a $1million at the annual event usually held in Las Vegas.

While Richard O’Brien failed to register an ace at Vilamoura in Portugal’s Algarve, he did land on the green, and that earned him a place in a prize draw for a trip to watch the Masters courtesy of YourGolfTravel.

Richard’s name was picked out, but much to his horror the opportunity was nearly lost when he failed to look at the email confirmation until the day the offer expired.

Luton-born O’Brien, who turns 50 in October and now lives in Enfield, said: “I played the hole in one challenge in Vilamoura but then totally forgot about it.  Then, several months later I saw in my email I had apparently won a trip to the Masters.

“I thought it was a joke or a scam, but it wasn’t and I managed to claim it on the final day before the offer went out of date. I so nearly missed it, which makes it even more incredible. The Masters is like the World Cup of football. This really is a dream come true to go and see it live.”

O’Brien, who plays off 18, is taking best pal Mark Hubbocks, who turns 50 in August, with him to Augusta, where the pair will enjoy flights, a five-night stay, two rounds of golf at local courses, car hire, entry to the Masters on Saturday April 8 and an invite to the after-party where they can rub shoulders with the rich and famous.

O’Brien added: “When I entered the MDHIO, I was with my mate Mark and we agreed that if either of us won the draw then we would take the other. I never thought it would happen but it has. It really is like winning the lottery.”

MDHIO director Martin Tyrrell said: “Every golf fan knows what an incredible tournament the Masters is and Richard and Mark will get to see it all live. Going to an event like that really is a once-in-a-lifetime opportunity for most people and they will absolutely love it.”

MDHIO, which has been running since 1990 in USA and since 2000 in Europe, has steadily grown in popularity over the years and more than 50,000 people each year try their luck at the various par 3 holes at the 40 associated courses across Portugal, mainland Spain, Majorca and the UK.

MDHIO is one of three companies, along with established tour operators Leisure Link Golf Holidays and Golf Amigos, who are joining forces to form a new entity (Million Dollar Holdings), which promises to create new experiences, events and escapes for golfers across the UK.

Bringing together a range of experienced operators from within the golf, retail and leisure industries, Million Dollar Holdings will offer golfers unique opportunities both at home and abroad.
The company is the brainchild of industry veterans led by entrepreneurs Martin Tyrrell, Kevin Stowe, Tracy Aslam, Doug Fisher, Jamie O’Doherty, Steve Ingle and Gordon Murray, who together boast more than 100,000 loyal golf customers between them.