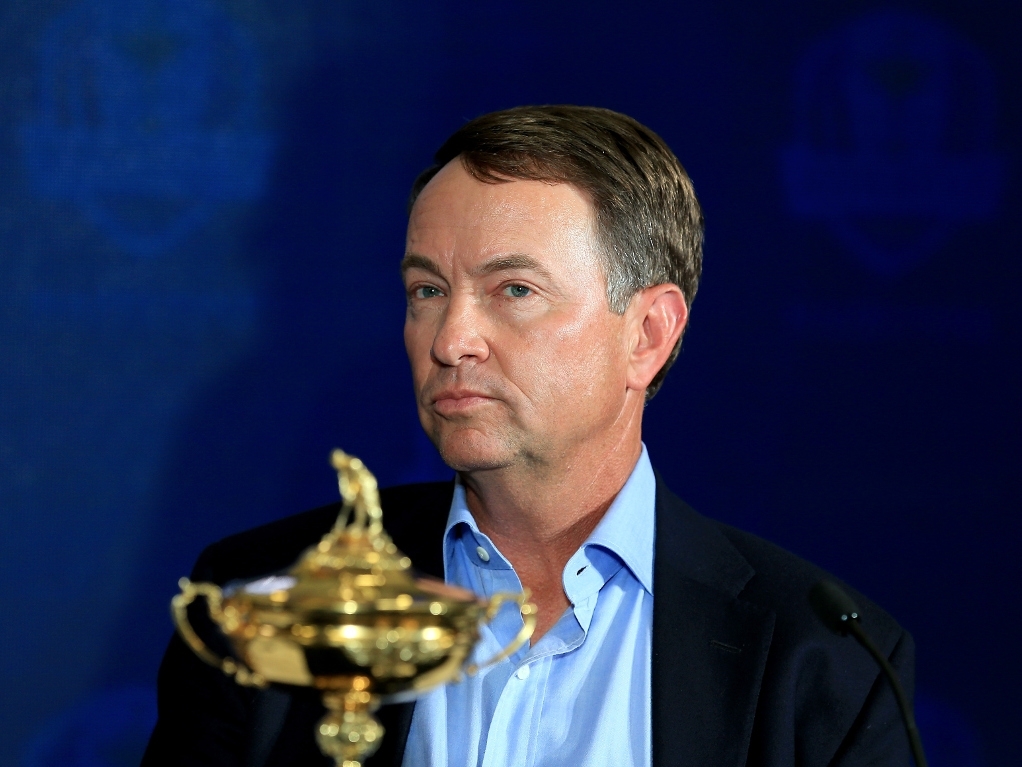 Davis Love III was on his porch in Sea Island taking part in a conference call for the first Ryder Cup Task Force meeting, and he was shocked by what he heard.

First, the PGA of America really was going to let the players have a voice. And then it quickly became clear the choice was going to be him. Love was introduced Tuesday afternoon as U.S. captain for the 2016 matches at Hazeltine.

And while it appeared as though the Americans were looking in their past, he was presented as the start of a new model they hope can end two decades of European dominance. He also was captain in 2012 at Medinah when Europe staged the biggest rally by a visiting team.

Love was part of an 11-member task force – eight of them former Ryder Cup players – that met twice since December. The agenda for the first meeting was to define the role of the captains and assistant captains, and then to throw out names. Among those mentioned were Fred Couples, Steve Stricker and Love.

Phil Mickelson, whose biting comments at Gleneagles regarding Tom Watson's style was the impetus for the task force, said the qualities of a captain included someone who was respected, didn't let his ego keep him from listening, some who could take the blame and share the credit, and who had the experience to build a blueprint for the next 20 years.

"There's only one guy who fits that bill," Mickelson said.

With a crowded schedule in 2016 because of the Olympics, that means the 12th player will be chosen five days before the matches begin.
Also, two of the vice captains will be former captains, and the other two will be players with Ryder Cup experience. Love already has selected Tom Lehman, the 2006 captain, to help him at Hazeltine. Lehman is from Minnesota.

Mickelson said the task force realized it had its captain after the first meeting, but it met again in early February and reached the same conclusion. The vote was unanimous the first time around. More than a captain they wanted, Mickelson said the players felt they had partial ownership in the future.

"We went from having zero input and zero continuity, and both of those things the Ryder Cup Task Force has solved," Mickelson said.
Love is the first U.S. captain to get another chance since Jack Nicklaus in 1987, and the first since Jack Burke Jr. in 1973 to get a second chance after losing. And he can expect to be involved in more Ryder Cups after Hazeltine.

Mickelson said he wouldn't rule out Love returning as captain in 2018, but "for sure a vice captain."

Europe last week selected Darren Clarke to be captain for Hazeltine. Tiger Woods, who was part of the task force, congratulated Love in a statement and said he respected him as a person, player and captain. Woods, Mickelson and Love will be part of the "Ryder Cup Committee," along with three PGA officers, to resume the work of the task force.
Love said he "didn't go in asking" to be captain again.

"I could not be more excited to captain the 2016 team," he said. "But I agreed to do it for one reason. The members of the task force, to a man, have said they will do whatever it takes for this team to be successful. They are all in. Our team will trust each other and we will have a shared vision."

Love said if he had been in the room, instead of on a conference call, when the names of potential captains were being written on a board, "I probably would have walked out" when his name appeared.

"It was more the process," he said. "In a text during a break to Steve or Jim (Furyk), we were like, 'They're actually going to let us pick the captain.' I don't know what I expected when I walked in there. I thought that I'd be giving advice."