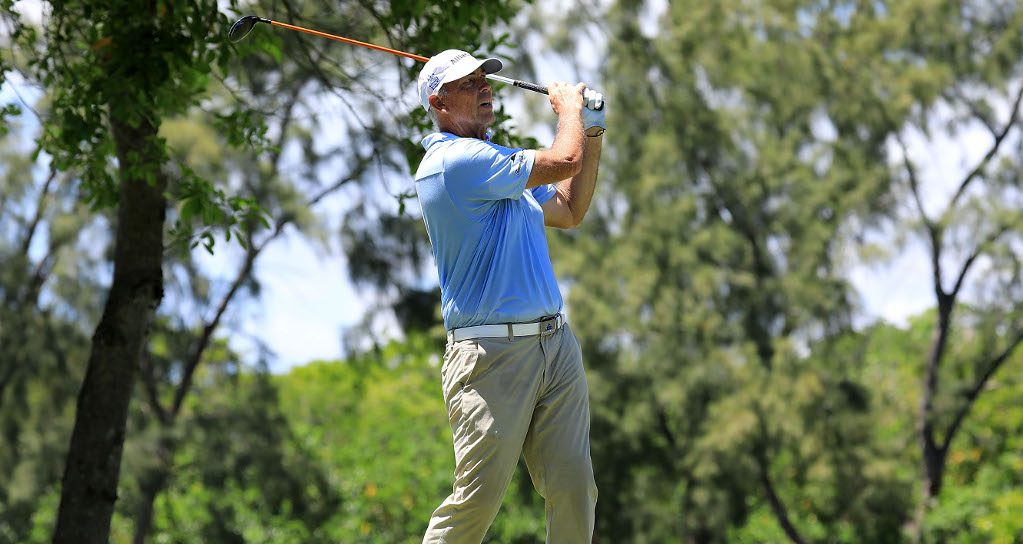 Tom Lehman used local knowledge of sorts to grab the first round lead in the MCB Tour Championship – Seychelles at Constance Lemuria.

The finale to both the Staysure Tour’s Indian Ocean Swing and the 2018 season itself was delayed by over four and half hours after the course was hit by torrential rain both overnight and during the morning of the first day’s play.

When the golf began the first round was reduced to 12 holes because the final six holes, which climb, creep between, and then descend two hills, were unplayable.

For 31 of the 32-man field this week is a step into the unknown as the Seychelles hosts its first ever professional tour event, but 59-year-old Lehman has prior experience of the course, from a visit eight years ago to celebrate his wife Melissa’s 50th birthday.

She rode the course with him today – yes, rode: she peddled along the cart track on a bicycle – and watched as her husband set the pace with a 3-under-par 42. He made four birdies in the first six holes before dropping a shot at the tricky par-4 “final” hole.

“It’s not a long course, plus it was wet and the early holes were all down wind so it was conducive to good golf for us,” he explained. “I had one great birdie on the fourth which was a tough test today, but otherwise I took advantage of some good scoring opportunities.”

The 1996 Open Champion was at breakfast when the rain started to fall and he immediately sensed trouble.

“Knowing how heavily it had rained in the evening we knew it was going to be difficult to play,” he explained. “We knew if there was any chance of play it would be on the first 12 holes and I’m glad we got to do it.

“The course is in good shape. There are some very, very wet spots, but overall it is very playable and the greens were remarkably dry with good speed. It was a great job by everyone involved.”

The sun is starting to shine at Constance Lemuria #MCBTourChamp pic.twitter.com/gKt4WzZgQB

Welshman Phillip Price and Denmark’s Steen Tinning both went bogey-free in posting 2-under 43s to claim a tie for second. Eight players share fourth on 1-under and, in all, 24 of the field head into the weekend within four shots of Lehman.

“There’s a lot of shots to be played yet,” insisted the leader. “When we start to play the other six holes then we’ll see a different golf course. All the real tricks and difficulty on this layout are in the hills. It’s going to be a matter of who can score well on the first 12 holes and who can survive those final holes.”

Tournament Director Simon Higgontbotham confirmed that, weather permitting, the final two rounds would be completed over the full 18 holes.