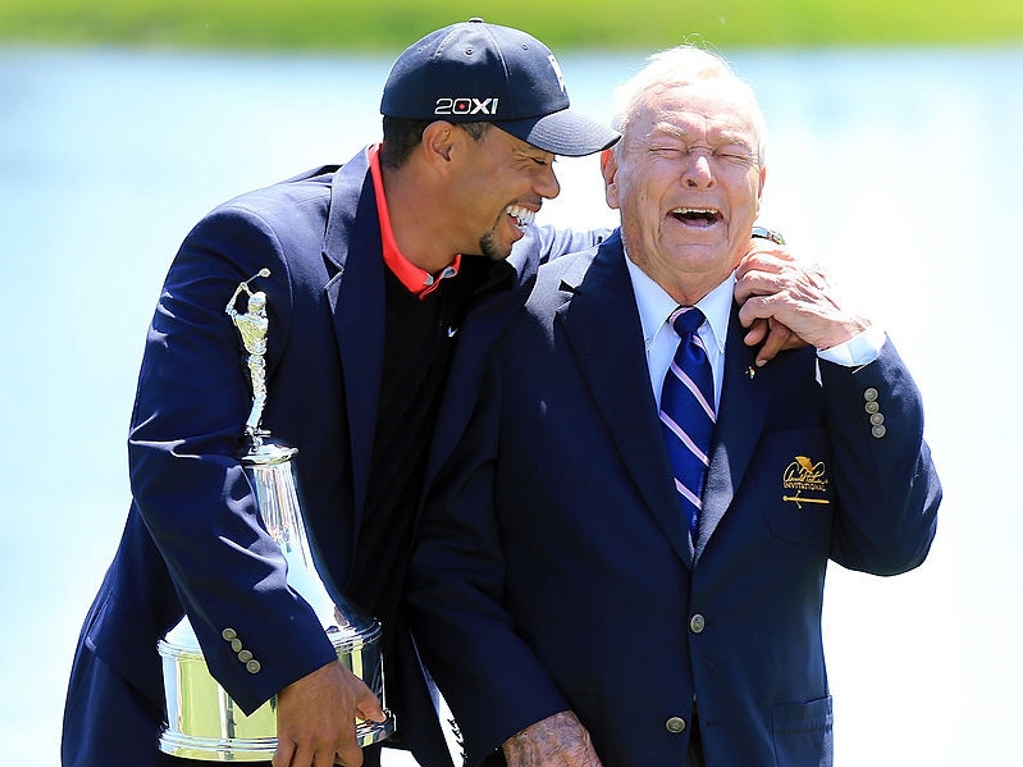 US golfing legend Arnold Palmer, seen by many as one of the greatest players in the history of the sport, has died at the age of 87.

Palmer died at a hospital in Pittsburgh, Pennsylvania, where he was reported to have been undergoing heart tests.

Tiger Woods reacted to the news by tweeting, "Thanks Arnold for your friendship, counsel and a lot of laughs. Your philanthropy and humility are part of your legend."

From humble beginnings, Palmer learned the game from his father Deacon who was a greenskeeper and club-pro at Latrobe Country Club in Pennsylvania. While he would later purchase this club, he still kept his oldman as greenskeeper until his passing in 1976.

Following a stint at college, Palmer left before the completion of his studies and enlisted in the United States Coast Guard for three years. He would return to college and competitive golf and got his first taste of significant success at the 1954 U.S Amateur.

This inspired Palmer to have a crack at the professional tour and he soon got his first PGA Tour victory under his belt at the 1955 Canadian Open.

Three short years and no less than seven more PGA Tour wins later, Palmer arrived at the 1958 Masters. Despite being his fourth outing at Augusta, Palmer edged the likes of Sam Snead and Ben Hogan for his first major win.

Two years later Palmer would earn his second green jacket and cue a river of silverware that flowed for several seasons. From 1960 to 1963, Palmer notched up no less than five majors and 29 PGA Tour wins and in the process formed ‘Arnies Army’ – his extensive fan base, cald with banners and all.

During that time, Palmer won back-to-back Claret Jugs at the Open Championship, which catapulted him to stardom amongst European and British fans alike.

1964 would see his final major win, fittingly at the Masters, where he trounced Jack Nicklaus by six strokes.

All the while, Palmer was cultivating an image loved by the American people. With his plain spoken words, humble demeanour combined with the advent of the television age in the 1950s, he quickly became golf’s biggest star.

And it was via the television that Palmer made arguably his biggest contribution to golf. His likeable character, among a myriad of other attributes, helped take the game out of the elite high-brow clubhouses and into the living rooms of fans everywhere, making golf more accessible for the lower classes of society.

Palmer also became part of what was known as the ‘Big Three’, effectively taking turns at lifting trophies with friends Nicklaus and Gary Player throughout the 1960s.

The charismatic player used all this to become one of the first golfers to market his image, paving the way for the likes of Tiger Woods. His inescapable charm and spotless reputation made him an instant hit with corporates, who rushed at the chance to be associated with Palmer.

Palmer embodied this spirit on the course as well, spending hours signing autographs even – and perhaps especially – when the cameras weren’t looking, winning the hearts of thousands that were fortunate enough to be in his presence.

The Pennsylvanian’s 62nd win on the PGA Tour would finally come at the Bob Hope Desert Classic in 1973. Such was Palmer’s prolific streak that he still stands fifth on the all time list of PGA winners.

Perhaps the only dent in his career is that Palmer did not complete the career grand slam. The PGA Championship is the only feather missing in his cap, where he finished runner-up three times.

In his later years, when he wasn’t flying his Cessna, Palmer threw his weight behind several philanthropic efforts.

Apart from building cancer centres in his hometown of Latrobe and then California, Palmer played a major role in funding the Arnold Palmer Medical Centre, the largest facility dedicated to children and women in America.

He also gave back to golf by forming a golf course design company, responsible for over 200 courses worldwide.

After all this, it should come as no surprise that Palmer has almost as many awards as trophies.

Among Palmer’s countless awards in golfing circles, including Hall of Fame status, there are two that stand head and shoulders above the rest.

The Congressional Gold Medal and the comparable Presidential Medal of Freedom are the highest honours a civilian can be awarded in the United States and patriotic Palmer has both of them.

While it’s hard to pinpoint the birth of Palmers nickname – The King – it is certainly an apt title for a man that achieved so much while remaining so self-effacing and alluring at the same time.

We should consider ourselves fortunate to have lived in the time of Arnold Daniel Palmer, a true inspiration to all.