Kuchar joins Spieth and Koepka at the top 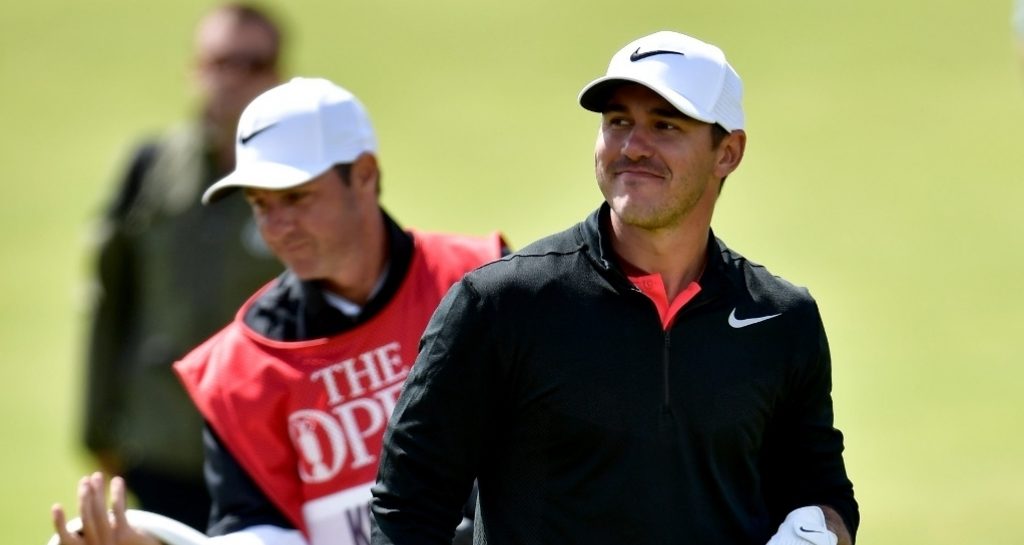 Two proven young major winners are among the first-round leaders on the opening day of the 146th Open Championship.

Jordan Spieth and Brooks Koepka both made significant statements with superb five-under-par rounds of 65 in the morning to share the early lead.

Spieth is a two-time major winner while Koepka is fresh from his maiden major victory at the US Open last month. Their sterling efforts on the opening day at Royal Birkdale definitely spells danger for their rivals.

The duo were eventually joined by fellow American Matt Kuchar, who matched their efforts later in the afternoon with a 65 of his own.

Spieth didn’t drop a single shot on the challenging links course, picking up three birdies on the front nine and two more at the back.

A bogey free round for the new clubhouse leader @jordanspieth. #TheOpen pic.twitter.com/Qc3ik002Gl

His fantastic short game came to the rescue whenever he found himself in a spot of bother, and had his eight-foot birdie attempt on the 18th found the cup instead of just sliding by, his round would have been even better.

"I couldn't have done much better today. I missed two greens," the 23-year-old admitted, who gave himself a nine out of 10 for his opening round.

"Everything was strong. I thought I'd give it a nine across the board for everything — tee balls, ball-striking, short game and putting. So things are in check. It's just about keeping it consistent."

And with the forecast predicting deteriorating conditions for Friday's second round, Spieth knows how valuable his great start could turn out to be.

"I thought today's round was extremely important, as they all are, but given the forecast coming in, I thought you really needed to be in the red today."

Perhaps even more ominously, in-form US Open champion Koepka soon joined Spieth at the top of the leaderboard after a 65 of his own.

Winning consecutive majors is a real rarity, but Koepka has given himself a real chance of doing just that thanks to his stellar opening round.

The 27-year-old was four under par through 13 holes before dropping a shot at the 16th. But a stunning eagle at the par-4 17th vaulted him into a share of the lead.

"I played pretty solid today," said Koepka, who has barely played any golf since his US Open win. "I felt like I was in control of the golf ball pretty much all day and it was just fun to get back playing again."

Co-leader Kuchar, meanwhile, made all five of his birdies on the front nine, and had to settle for a string of nine pars on the back, but he'll no doubt be satisfied with his day's efforts.

"For me to start my Open with a 29 on the front nine is a great way to start," he said.

His lowest ever opening round in a Major (54 starts). pic.twitter.com/jCqO9Ojmjw

South African Ernie Els and BMW PGA champion Alex Noren are among those on two under, three back, alongside World No 2 Hideki Matsuyama.

Further down the field, former World No 1 Rory McIlroy had a remarkable round, finding himself five over par through his opening six holes before rallying with four birdies on the back nine to salvage a one-over-par 71.

If scorecards had pictures … pic.twitter.com/dZzaKTUeAw

"I am just trying to remember the last 12 holes and scrub the rest out of my mind," McIlroy said.

"I'm encouraged about what I saw on the back nine and will try and go out and do it all again tomorrow and limit the mistakes. I played 12 good holes and hopefully that will keep the run going."

Defending Open champion Henrik Stenson is in the hunt after a one-under 69. The Swede lies four shots back alongside Australian Jason Day.

World No 1 Dustin Johnson joined McIlroy on one over, as did Rickie Fowler.