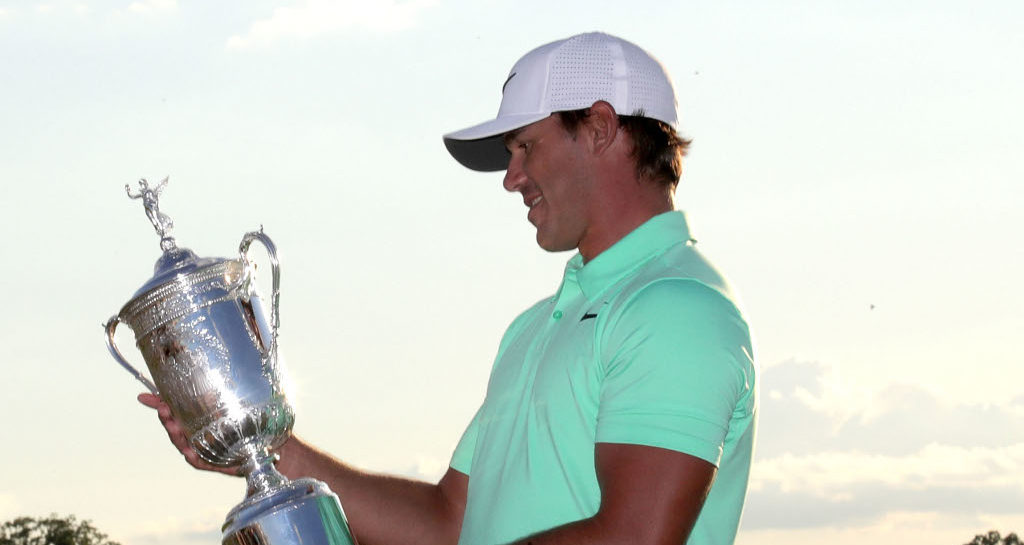 Brooks Koepka became golf’s seventh successive first-time major winner when he seized the US Open with an assured final day at Erin Hills.

He equalled Ernie Els’ record for the lowest winning score the US Open has ever seen and he needed it to surge clear of a relentless chasing pack. Brian Harman, Hideki Matsuyama and Tommy Fleetwood all massively exceeded expectations to finish in the top four. What a fantastically unpredictable sport golf is nowadays. How wonderfully refreshing it is to see new winners emerging every time a major tournament rolls around. A core of big names dominates virtually every other sport in the world, but not golf, which is open and thrilling.

Jason Day, Danny Willett, Dustin Johnson, Henrik Stenson, Jimmy Walker, Sergio Garcia and now Koepka have all gone into tournaments without a major and realised their dreams in the last seven majors. None of the contenders at Erin Hills had won a major before. The best performing player with a major already to his name was Garcia, back in 21st place on -4, 12 shots off the lead and nowhere near Harman, Matsuyama and Fleetwood.

Attention now turns to The Open, followed by the US PGA, and it seems almost inconceivable that they will be won a player with a major already to his name. Perhaps the hunger dies out after you have won one, and you cannot match the desire and intensity of someone that has not joined the list of greats. So much for Day, Jordan Spieth and Rory McIlroy becoming golf’s Big Three that would dominate golf for years to come. So much for those three and Dustin Johnson forming 2016’s Big Four. All missed the cut apart from Spieth at Erin Hills. The top three ranked players in the world, Johnson, McIlroy and Day, were absent from the business end of the competition for the first time since the rankings began in 1986.

No, golf is wide open and it must be incredibly heartening for all players when they seen new major winners popping up every time. Several punters will have made a lot of money on it too. Writing off the favourites, which always includes the aforementioned Big Four, has been a profitable endeavour, and backing players like Garcia and Koepka around the 33/1 mark has paid off handsomely.

It now seems worth constantly revising the list of best golfers without a major win when looking to predict who will win the next one. Garcia was a leading candidate among that group, as was Koepka. So who is left?

A couple of names instantly spring to mind, and they acquitted themselves well at Erin Hills. First up, world number four Matsuyama. He posted a sensational final day, bettering even that of Koepka, to make up ground and finish joint second. He is constantly improving and will be a big threat at The Open. Rickie Fowler, the only other man in the world top 10 that was in with a chance in the US Open, is also still without a major and keeps knocking on the door. Surely his time will soon come.  Branden Grace, Thomas Pieters and John Rahm are also contenders. Review the odds on a trusted source like BetDSI and you will get great odds on this bunch of excellent players. A glance at the odds shows that Johnson, McIlroy, Spieth and Day are still the top four favourites for both of the remaining majors this year. Given their form and the low odds it does not seem worth bothering with. Matsuyama is 20/1 for The Open and for the USPGA, Fowler is 22/1 for The Open and 35/1 for the USPGA, Grace is 50/1 and 66/1, Pieters is 50/1 and 80/1 and Rahm is 28/1 and 33/1. The days of a Tiger Woods-like player dominating the sport appear to be dead. Johnson, McIlroy and Day have not been able to fill the void, while Woods himself is a long way off competing at the top again. It is open and exciting and there is plenty of value to be had for punters.