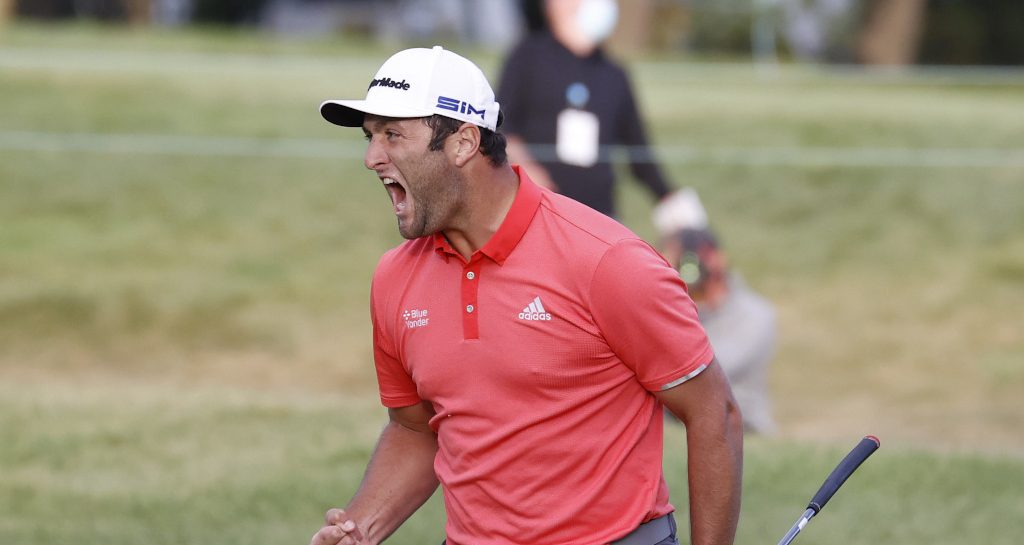 Jon Rahm couldn’t help but revel in his victory at the BMW Championship on Sunday, which came courtesy of some spectacular heroics on the first play-off hole.

The Spaniard sank a 66-foot sloping putt for victory on the first extra hole to defeat Dustin Johnson and reclaim the World No 1 spot from his vanquished opponent.

After starting with disappointing rounds of 75 and 71, Rahm had made a huge move up the leaderboard over the weekend thanks to rounds of 66 and 64, but an in-form Johnson managed to force a play-off with a long-range birdie of his own on the 72nd hole.

But Johnson, a runaway winner at last week’s Northern Trust, could do nothing about Rahm’s brilliance in the play-off, as the Spaniard sank a putt for the ages to walk away with the spoils.

After the win, Rahm was asked how he even began to try and read a putt like the one he was faced with, one so far away from the hole and with so much break.

“Well you know, I grew up at a golf course with a lot of slopes on the greens, so putts like that are something that I… not that I enjoy, but I can see… I’m comfortable hitting those putts.

“I think I’d be more concerned if it was 60 feet straight, because I’m incapable of hitting it in a straight line,” he joked.

Offering more detail into his process for dealing with a putt of that nature, Rahm said: “I just kind of broke it into sections.

“The first two-thirds or almost three-quarters, it’s all the same, breaking right, and once you get to the top of the slope, it goes a little left and then back to the right.

“So all I had to do was pick a spot at the top of the slope that the ball had to go through, and hopefully give it the right pace.

“It’s one of those where if you give it the right pace, it’s possibly easy to be in a range within six feet right or left of the hole. You’ve just gotta get the speed [right] and the ball funnels to the hole.

“Man, when that ball got to the crest of the slope it looked so good,” he added with a beaming smile. “That’s when it started kind of going on line. It looked really, really good. It felt great off the putter, and it rolled in.

“I can’t wait to see the replay. I still can’t believe that ball went in.”

Rahm is now cutting an incredibly confident figure with both the US Open and Masters to come. His victory in The Memorial Tournament at Muirfield Village last month and Sunday’s win at Olympia Fields has proves he has what it takes to perform when the golf courses get tough.

Often accused of letting his emotions get the better of him in tight situations, Rahm believes he has ironed out this weakness in his game, and it spells serious danger for his rivals.

“You know, I’ve always enjoyed a challenge, but maybe in the past – to surprise nobody – my emotions got the best of me in some of those situations. The frustration built up.

“But on courses like this one, you just have to understand that it’s a grind. Everybody’s going to struggle at some point. I learned that at Muirfield. I knew that playing good golf and swinging as good as I was on the weekend, all I had to do was manage [my emotions] and possibly give myself a chance.

“I’ve never been at Winged Foot (host venue for the US Open), I don’t know the golf course. The last US Open there was extremely difficult. Four over par won the tournament, so we’ll see.

“That mental strain is going to be a factor, so hopefully I can just go there… and do what I’ve done these last few tough weeks.”