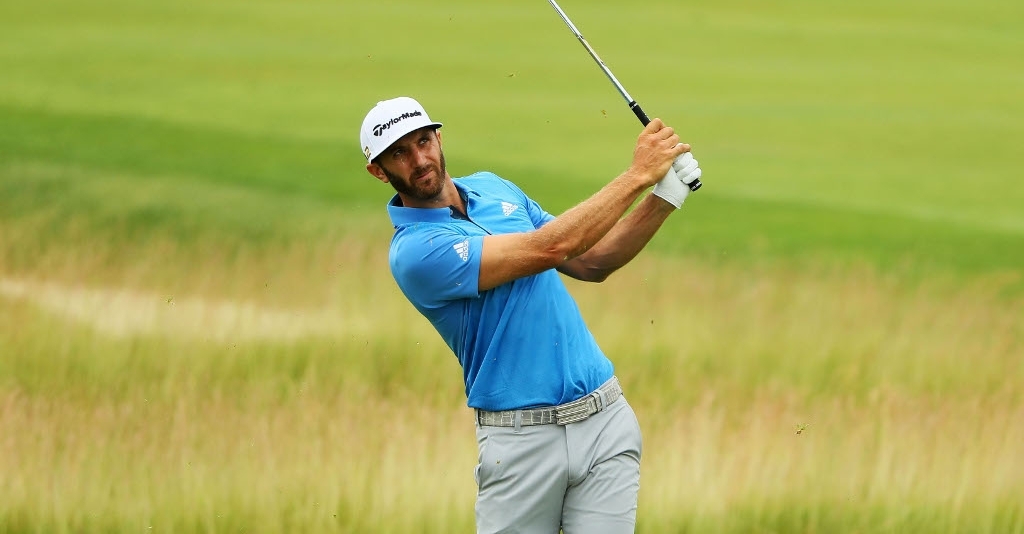 Late starters Dustin Johnson and Sergio Garcia both played their way into the top five as the first round of the US Open finally drew to a close.

Though Andrew Landry's four-under-par mark set in the morning continued to lead the way, Johnson was one of the few players able to move right up alongside the little-known American, posting a three-under-par 67 to move into a tie for second place alongside Lee Westwood.

Johnson was the only player to complete his first round without a single bogey. The 67 marks his third straight US Open opening round in the 60s, and the ninth consecutive US Open round which sees him among the top six players.

"I like the golf course; I've liked it since the first time I saw it last Tuesday," said Johnson, who narrowly lost out to Jordan Spieth at Chambers Bay a year ago. "I think it's just a good, challenging golf course. It's fun to play. You've got to hit a lot of different shots."

Johnson admitted the rain had made conditions slightly easier than they were in the practice rounds leading up to the first round.

"It's still playing tough," Johnson said. "But the practice days we played, the course was really firm and fast. It's still kind of difficult out there. But if we get nice weather, it's going to dry out."

Another player who managed to make his way to the top of the leaderboard was Garcia, whose 68 left him just two shots back alongside Irishman Shane Lowry.

The Spaniard mixed five birdies with three bogeys to put himself firmly in the reckoning for a maiden major crown.

Westwood, meanwhile, had an eagle-two at the short par-4 14th to thank for helping him to a 67 and a share of second place.

He holed out from 124 yards to pick up two shots in the blink of an eye, but was consistently good throughout his round and was pleased with his performance.

"It was good, one of the best starts I've ever had," Westwood said. "I felt confident out there and hit a lot of good shots. I was shaping it both ways, which you need to do in U.S. Opens to get at a lot of the flags."

Further down the leaderboard, the so-called 'Big Three' had wildly differing fortunes.

Jordan Spieth managed to stay in the hunt with a one-over 71, but Rory McIlroy and Jason Day have lots of work to do after rounds of 77 and 76 respectively.

"I didn't shoot myself out of it," Spieth said. "I'm not really sure how my score stands right now, but I know that at the end of the day, the USGA is going to try to have even par win the golf tournament, and I know that I can shoot 2 under in the remaining 54 holes no matter how the course plays. I know I'm capable of it. I'm in it."

As the late starters finally completed their first rounds, the second round got under way as well, with Johnson having just moments to gather himself before heading back out.

A good portion of the field will only start their second rounds on Saturday morning, though tournament organisers are still hopeful of completing all four rounds by Sunday.