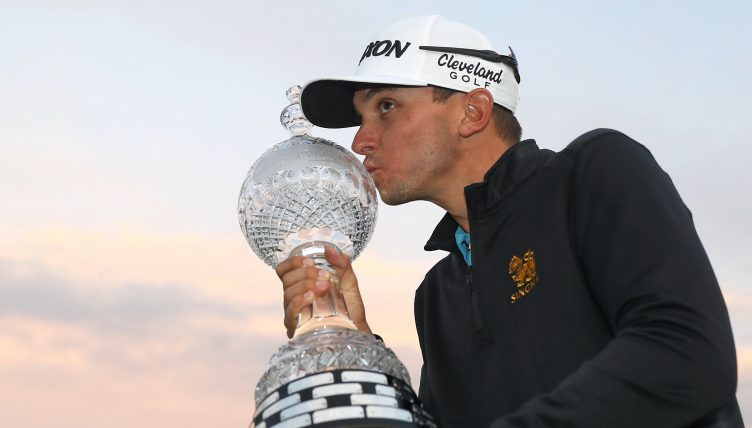 The 29-year-old held off two-time major champion Martin Kaymer to clinch his first title at the Andalucia Masters at the start of the month and needed similar grit to triumph amid a congested leaderboard in Ballymena.

Catlin, who was removed from the English Championship for breaching Covid-19 protocols a month prior to his maiden European Tour win, began the final round four shots adrift of overnight leader Aaron Rai but shot a superb 64 to reach 10 under and finish two ahead of the Englishman.

Australian Maverick Antcliff joined Rai, who began with a bogey-birdie start, at eight under after a birdie at the second hole, but dropped shots at the 11th and 12th derailed his chances.

Rai continued to set the pace at eight under, but was soon joined by Swede Oscar Lengden, Thai Jazz Janewattananond and Catlin in a tie for the lead.

Lengden had reached that mark after his opening four holes following birdies at the second and fourth, only to card bogeys at the fifth and seventh to drop back.

However, an eagle catapulted him back to eight under, while Catlin birdied the second, fourth, eighth and 10th for a four-way tie.

Janewattananond picked up shots at fourth and sixth to get to eight under and, when he birded the 10th hole, he was the new leader.

Rai momentarily regained the lead with a birdie at the 10th to get the nine under as Janewattananond bogeyed the 12th, but the Thai immediately picked up a shot at the next.

Rai bogeyed the 11th to drop back to eight under, with Catlin one adrift after a dropped shot at the 13th, as Janewattananond held a one-shot lead at Galgorm Castle.

But the 24-year-old relinquished his advantage with a double bogey at the 14th to leave Rai alone at the summit.

Catlin had other ideas, however, as he recorded consecutive birdies at the 15th and 16th to get to nine under to take the outright lead.

The American, who was playing two groups ahead of Rai, birdied the last to set the clubhouse target at 10 under par, but his English rival refused to lie down as he picked up a shot at the 17th hole.

A birdie at the par-five 18th would have forced a play-off, but Rai could only record his third bogey of the final round to finish on eight under.

Janewattananond and Antcliff finished one shot further back in a tie for third.