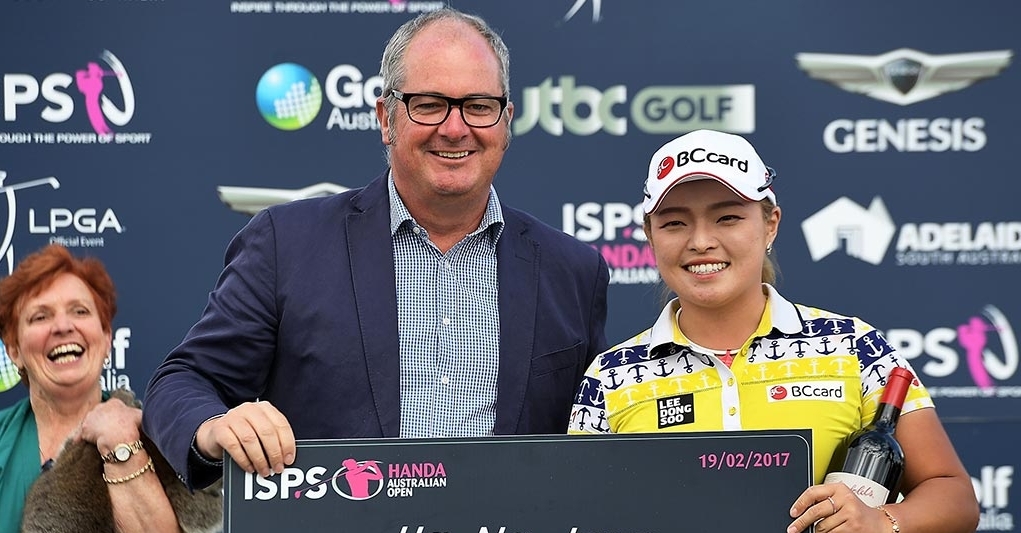 Korea Republic's Ha Na Jang fired a final round 4-under-par 69 to finish on 10 under and claim the 2017 ISPS Handa Women’s Australian Open title by three shots over Denmark's Nanna Madsen on Sunday.

Jang started the final round four shots back at Royal Adelaide to win her fourth LPGA Tour career title.

After starting the day with a bogey on the opening hole, Jang knuckled down and shot pars until her first birdie on the 13th and then again on the 14th hole then an eagle and birdie on the final two holes for her round of 69.

In an interview after her victory, the 24-year-old Jang said she was very nervous when she started the final found.

"The first hole I was very nervous on the tee because I want to make birdie at every hole, more aggressive and try that. The second shot was a really big miss, a little topping of my ball and after hole number one it’s really tough day, because every hole par, par, make par, and then just I talk to caddie, it’s like, 'Okay, I try just be patient every hole'," said Jang.

Overnight leader Lizette Salas of the US finished in a tie for seventh with six others at five under after firing a disappointing five over round of 78 which included seven bogeys and two birdies.

In a tie for third, there were four players, all on six under, namely, Minjee Lee (Australia), Ariya Jutanugarn (Thailand), Haru Nomura (Japan) and Australian Sarah Jane Smith.