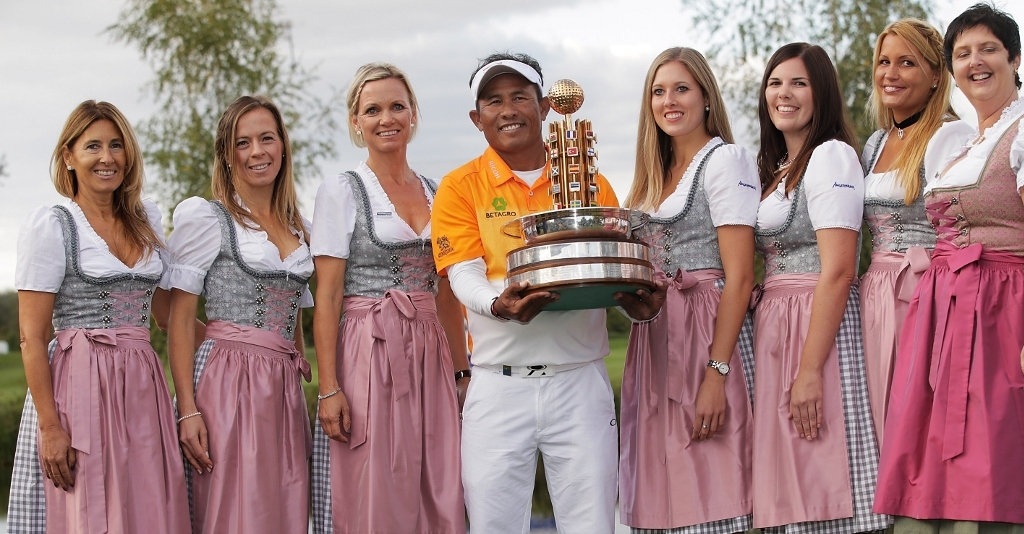 Thongchai Jaidee edged Graeme Storm to win the Porsche European Open by one stroke on Sunday.

The Thai sensation carded a steely four under 67 in the final round, leaving him on 17 under at Golf Resort Bad Griesbach, a mere one stroke ahead of England's Storm.

Storm and Jaidee went head-to-head on the back nine in Germany, swapping the lead on many occasions.

The Englishman tapped in for a birdie on the 15th to take one shot lead, but Jaidee levelled matters with his birdie on the same hole.

After both players parred the 16th, Jaidee took the lead when Storm found the water with his tee shot on the par three 17th.

He would scramble well to make a bogey, but that was all the advantage Jaidee needed, as he rolled in three pars i a row to earn his seventh European Tour title.

“It’s a very special week for me,” said Jaidee at the trophy presentation.

"It is the third time I have won outside of Asia, so I’m very excited about that and I’m happy to win this tournament.

“I’m feeling very confident at the moment. I didn’t make many mistakes this week – only one bogey all week. I played very nicely and 17 under is some score for me.

“I liked the golf course. It’s not very long and you have to keep it in play. Graeme Storm played very well too. It was very exciting on the last three holes. The 18th is tough and you can’t miss the fairway. I had to go left and then it was a good chip and a good putt at the last to win.”

At 45-years-old, Jaidee becomes the oldest winner of the event. The record eclipses Colin Montgomerie, who was 44-years-old in 2007.

Pelle Edberg would finish by himself on 14 under. The Swede was followed by Australian Scott Hend in 13 under while Rikard Karlberg, Jamie Donaldson and Lucas Bjerregaard were tied for fifth on 12 under.