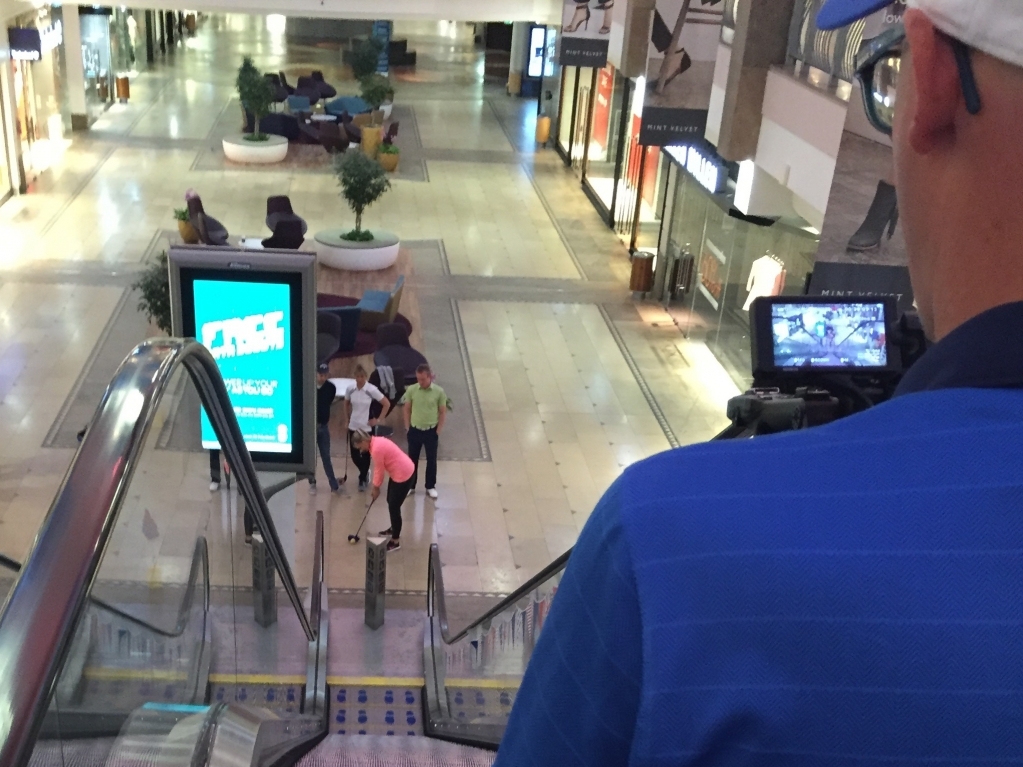 You've heard of ‘jumpers for goalposts'; how about ‘escalators for fairways'? It may sound far-fetched, but that's exactly what happened at Bluewater shopping complex, in Kent, on Sunday night, once the shops had closed their doors.

Then, the concourses were handed over to the team from the London Golf Show, which played SNAG golf around the venue, across two levels and up and down escalators, to produce video content for the show, which takes place at Glow, Bluewater, from August 26-28, 2016.

The stars of the unique event were two members of the Ladies European Tour, Sophie Walker and Charlotte Thompson, who were joined by London Golf Show host and PGA professional Mark Crossfield, whose YouTube coaching videos have received more than 90 million views, two further YouTube PGA coaches Matt ‘Coach' Lockey and Steve Buzza, and members of the show's organising team.

Using SNAG golf equipment – which is soft and designed to introduce young children in to the sport – the participants played to four bespoke golf holes placed at various spots around Bluewater, all the while being filmed for use on Crossfield's YouTube channel.

London Golf Show events director Simon Jones explained: "We are very grateful to Bluewater for allowing us to have some fun around the venue. Everybody at Bluewater is very supportive of the show and of what we are trying to achieve in getting more people into the sport.

"Mark Crossfield has proved himself an expert in reaching out to a new generation of golfers – and potential golfers – and quirky little things, like hitting balls around a shopping centre, often appeal to this generation.

"The videos will be up on Mark's YouTube channel shortly and we hope that, once and for all, it may tell us who actually won … nobody could work it out on the night," he laughed.

Walker, 31, who is currently enjoying her 10th season on the LET, spoke for everybody when she added: "I've played some of the best courses in the world but nothing compares to Bluewater shopping centre. First-tee nerves at the British Open seem minimal compared to a lob shot over Joe the Juice.

"What an experience to play golf in a shopping centre: no grass or flags in sight, just elevators and shops."

Six lucky show visitors will, each day, win the chance to have a 30-minute lesson with Crossfield and Lockey, which will also be recorded and shown on the former's YouTube channel. Crossfield, who has been coaching golf for more than 20 years, will also host the daily ‘Innovations in Golf' section on stage, which focuses on gadgets and equipment new to the market.

Launched in 2005, the London Golf Show is the UK's longest-running consumer golf show and was designed to appeal to golfers – and potential golfers – of all ages and abilities. With myriad interactive stands – including nearest-the-pin, long-drive and long-putt contests; free PGA tuition; a massive indoor driving range featuring the majority of golf's best-known club brands; custom fitting; club testing; trick-shot displays; simulators; the latest golf gadgets; extensive retail; and the opportunity to win everything from a packet of tees to an exotic golf holiday, it is the ultimate day out for any golf enthusiast.

Tickets to the London Golf Show – which takes place at Glow, Bluewater, in Kent, from August 26-28 – are free for accompanied under-16s, and also for lady golfers, until August 25. Tickets cost just £7.50 – until July 31 – for everybody else. Entry will cost £15 on the door.