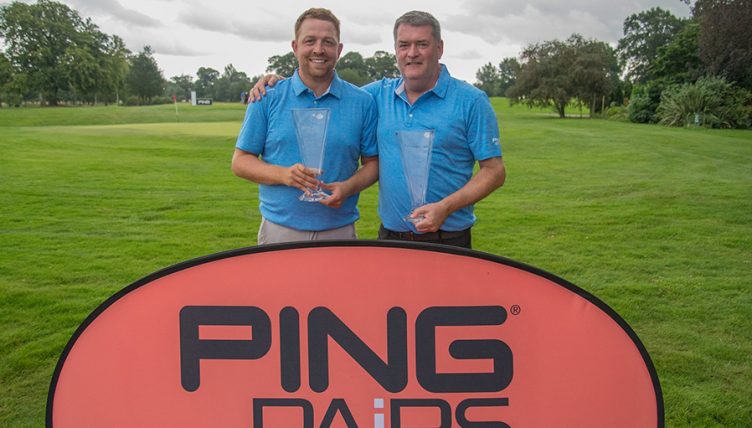 The inaugural PING Pairs golf title – powered by HowDidiDo, Europe’s largest online community – was secured by a duo from Hornsea GC, in Yorkshire – by the narrow margin of just one point.

Lee Guest, a six-handicapper, and Ashley Dexter, who plays off three, from Hornsea GC in East Yorkshire saw off the challenge of seven other pairs in the final at PING’s ‘home course’, Thonock Park, in Gainsborough, with 39 Stableford points enough to leave Shropshire-based Lilleshall GC pairing Jon Spiers (13) and Richard Saxon (13), with second spot.

More than 12,500 people signed up for the unique competition, which allowed golfers – of any gender or category – to team up with any other HowDidiDo user. Each player’s top three scores in handicap qualifying competitions of each at their home course were recorded and combined to establish a position on the PING PAIRS leaderboard, hosted virtually on HowDidiDo.

The top eight pairs then earned themselves a place at Thonock Park for the grand final and a VIP PING experience, including a behind-the-scenes tour of PING’s European headquarters; custom-fitting experiences for the brand’s latest putters and drivers; and a guided tour of the impressive PING European Tour truck.

The winners each took possession of a PING-fitted driver and putter, while all competitors received a PING ‘goodie bag’, comprising a personalised carry bag, two polo shirts, a mid-layer, belt, hat, glove, towel, umbrella, and ball marker. The grand final was a better-ball Stableford competition, off a three-quarter handicap, with finalists’ handicaps ranging from plus four to 30.

HowDidiDo spokesman, and chairman of Yumax Media, Barry Dyett said: “Everyone at HowDidiDo is very proud of the PING Pairs and how well the competition has been received by our community of golfers. The format is innovative and has brought together more than 12,500 avid golfers which is a great achievement.

“The grand finals gave golfers a money-can’t-buy experience and we’re very proud to have worked alongside PING to give club golfers the chance to be a part of something so special. Once again it illustrates how beneficial being a member of HowDidiDo can be. We’re looking forward to growing the competition in the future and we’re confident it will only get bigger and better.”

PING Europe‘s managing director, John Clarke, was in attendance to welcome the finalists and present the prizes. He said: “We were delighted to welcome the 16 finalists to Thonock Park and PING for the final of the 2019 PING Pairs event, all of whom did incredibly well to finish ahead of the other 12,500 entrants.

“The feedback received from all the finalists has been fantastic and really showcases the quality of this event, which is free to enter, requires you to do nothing but sign-up through your HowDidiDo profile, and play well in your club competitions.

“This was the inaugural running of the PING Pairs and we have been really pleased with the engagement from everyone who took part. On the back of this year’s final, we’re anticipating significant participation growth over the coming years, as PING and HowDidiDo continue their partnership of this event.”