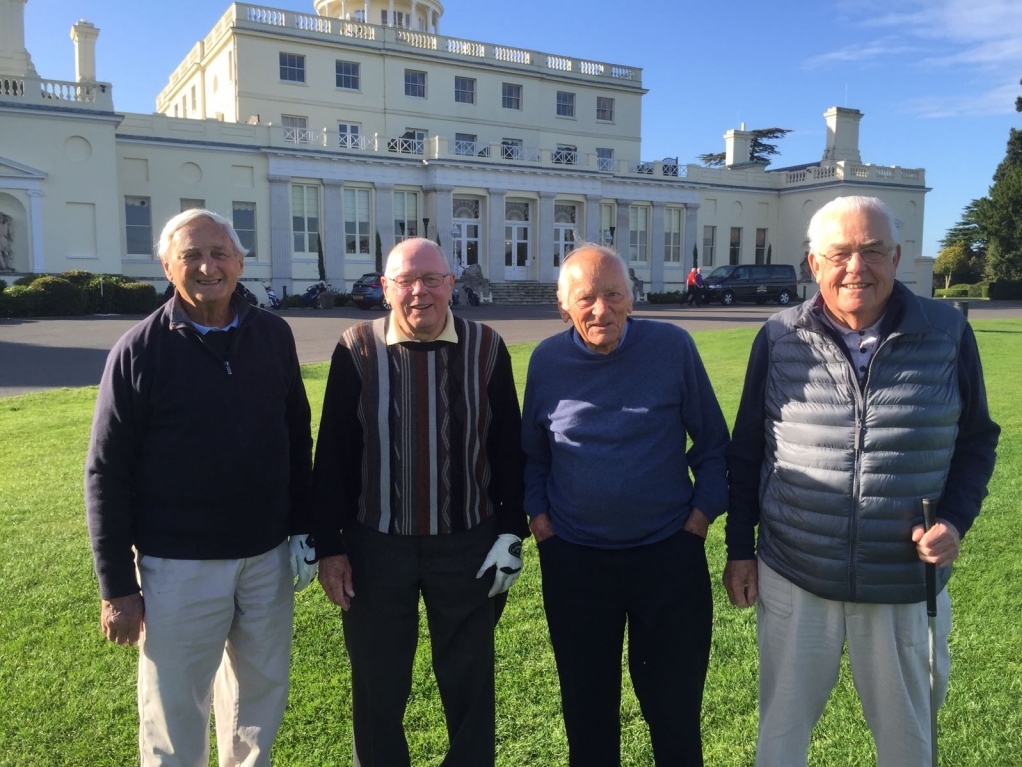 A 91-year-old member at Stoke Park Country Club, Spa & Hotel scored a hole-in-one this week – watched by playing partners with a combined age of 267!

John Bush aced the picturesque 168-yard, par-three third hole on the Lane Jackson nine – the club's 21st hole – for his third hole-in-one, the other two coming when he was a mere stripling in his eighties.

Bush's playing partners in his regular fourball were also veterans of the fairway: Dennis Child is 89, Bob Cook 90, and James Grant a youngster at just 88. Which all prompted officials at the historic club to pose the question: Is this the oldest fourball in the country?

Director of golf Stuart Collier said: "What a brilliant feat by John. I don't reckon there can be many people who've had their entire collection of holes-in-one since they turned 80.

"And, when you look at the guys in that group, with a combined age of 358, you have to ask is there a more vintage regular fourball in the country …?

"All four golfers are part of our special 80 membership category, which was created by Stoke Park to allow senior members to continue playing golf and enjoying all the aspects of membership at a reduced rate with access to nine holes of golf per day.

"It's been a great success and the elder members have embraced it, not just for the golf and fitness aspects, but also the increased social interaction."

Bush's achievement is remarkable – but he's not the oldest golfer to record a hole-in-one. That record is believed to be held by 103-year-old Gus Andreone, who in 2014, as the oldest member of the Professional Golfers Association, aced the 113-yard, 14th hole of the Lakes Course at Palm Aire in Sarasota, Florida.

In Europe, the oldest golfer to record a hole-in-one is believed to be 99-year-old Swiss Otto Bucher, from Geneva, who holed out on the 130-yard 12th hole at La Manga Club, in Spain, in January 1985.

Collier smiled: "That means John only has to wait another eight years or so to be the oldest in Europe. And, to be fair, I wouldn't put it past any of the guys in that group to do that!"

Set within 300 acres of beautiful private parkland estate in Stoke Poges, Bucks, Stoke Park is only 35 minutes from London and seven miles from Heathrow Airport. Laid out across 300 acres of mid-19th century, Lancelot ‘Capability' Brown-landscaped parkland, the 27-hole golf course was designed by the legendary Harry Colt in 1908.

It is one of just two five-AA Red Star golf clubs in England and the historic land on which it stands is recorded in the Domesday Book of 1086. The historic course played host to the PGA Matchplay in 1910 and, even more famously, the golf match between Sean Connery's James Bond and Auric Goldfinger, in the 1964 film, Goldfinger. It also has a thriving golf club with around 800 active members.

During the winter of 2015/16, every bunker on the Colt course – the first nine holes of the historic 27-hole layout – underwent major renovation to both shape and size, as part of a seven-figure investment in a facelift of the whole course. And this winter will see a similar overhaul of the Alison course – holes nine to 18 – as Stoke Park looks to bring the second nine into line with the aesthetic quality and playability the front nine now enjoys.