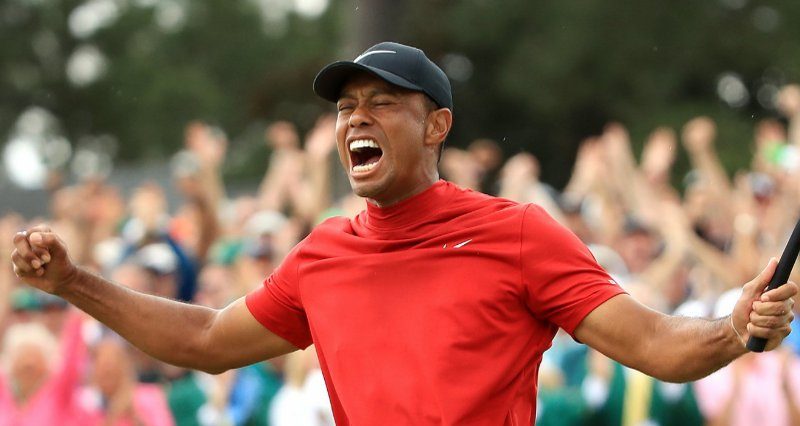 There were incredible scenes at Augusta National on Sunday as a jubilant Tiger Woods won the Masters by one shot to complete one of the greatest comebacks in sporting history.

Nearly 11 years after winning his 14th major trophy, Woods finally made it 15 courtesy of a masterclass performance on the back nine that left a whole host of the game’s biggest names trailing in his wake.

Open champion and Ryder Cup hero Francesco Molinari started the day leading by two shots and still led by the same margin after 11 holes, but he seemed to wilt under the pressure of playing with Tiger and the raucous crowds cheering him on when it mattered most.

It was a familiar sight if you used to watch Tiger during his glory years, and Molinari wasn’t the only player in the final groups affected by what was happening.

The Italian had been practically flawless over the first three rounds, making just one bogey in 54 holes, but with the pressure on down the stretch he found the water twice and made double-bogey each time, first at Rae’s Creek on 12, and then again at 15 when he was still tied for the lead, effectively ending his chances.

In contrast, Woods seemed to thrive under the pressure, feeding off the crowd like the Tiger of old, and after his final bogey of the day at 10 he didn’t put another foot wrong.

Woods played the two par-fives, 13 and 15, to perfection for comfortable birdies, and then produced an absolute peach of a tee shot on the par-3 16th, catching the slope to allow his ball to trickle down to within a few feet of the hole for a birdie that put him two clear with two to play.

A near ace on No. 16, Tiger Woods extends his lead with two holes to play at #themasters pic.twitter.com/9IJRrbfYhc

Behind him the likes of Brooks Koepka, Xander Schauffele, Dustin Johnson and Jason Day were finishing strongly to try and put some pressure on the final group, but it wasn’t enough to stop Tiger.

A solid par on 17 gave him a two-shot cushion with one hole to play, and while an ultra conservative approach at 18 resulted in a bogey, it didn’t matter one little bit.

When he sank the victory putt on the 18th green, it sparked an incredible celebration from the stands, and an even more incredible one from Woods himself, who could barely contain his joy as he rushed to hug his family and acknowledge the crowds.

The 43-year-old father-of-two seemed to absolutely revel in the moment, and who could blame him.

As little as two years ago, his career seemed dead and buried by his own admission. A series of crippling back and knee injuries hadn’t just left him unable to play golf, but struggling to perform even the simplest of tasks.

A last-chance spinal fusion surgery in April 2017 did the trick, however, and managed to revive the career of the 14-time major champion in a way few thought possible.

Woods contended at last year’s Open and battled Brooks Koepka for the PGA Championship before finally returning to the winner’s circle at the Tour Championship in September.

That was an incredible achievement in itself, but to win the Masters seven months later is simply astonishing and confirms what had never really been in doubt anyway: that Tiger Woods is one of the greatest golfers ever to play the game and one of the greatest athletes in sporting history.

Woods’ 15th major moves him to within three of Jack Nicklaus’ record number and no doubt Woods and his legion of fans will start to believe again.

After what transpired at Augusta on Sunday, anything seems possible.