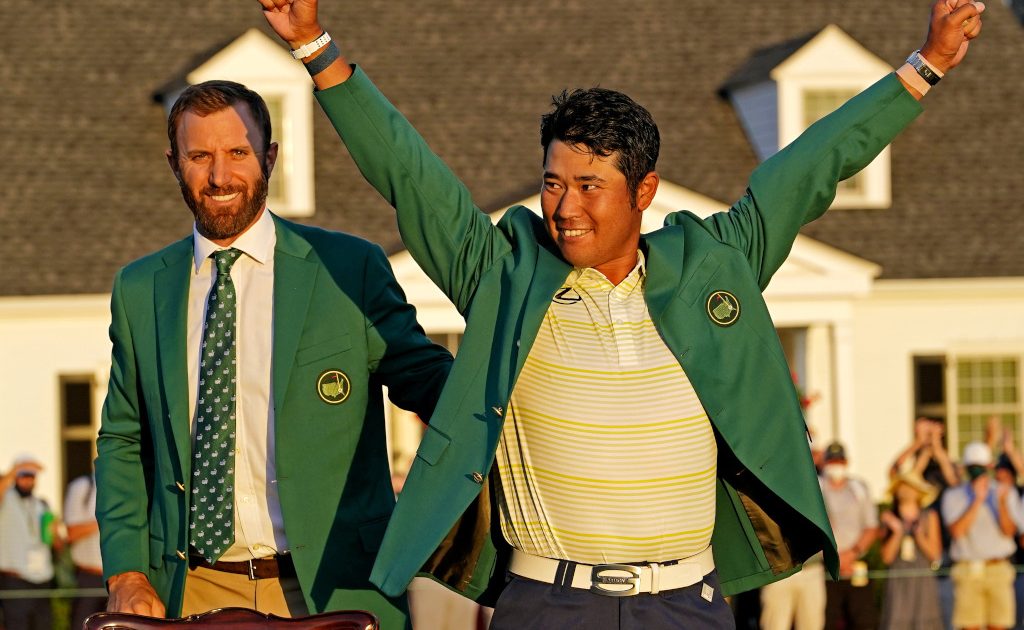 Hideki Matsuyama recovered from a nervy start and survived a late self-inflicted wound to claim his first major title in the 85th Masters.

A decade after finishing as the leading amateur at Augusta National, Matsuyama became the first male Japanese player to win a major championship, cementing his superstar status in his home country.

The 29-year-old was cruising to victory until a two-shot swing on the 15th saw his lead cut in half, only for nearest rival Xander Schauffele to promptly find the water with his tee shot on the 16th.

A closing 73 gave Matsuyama a winning total of 10 under par, one shot ahead of debutant Will Zalatoris, with Schauffele and 2015 champion Jordan Spieth two strokes further back.

Spain’s Jon Rahm surged through the field with a 66 to share fifth with Australia’s Marc Leishman, with Justin Rose another stroke back following a disappointing 74.

Scotland’s Robert MacIntyre birdied the 18th to claim a tie for 12th on his tournament debut and secure an invitation to return next April.

Matsuyama took a four-shot lead into the final round, but within 15 minutes of teeing off the gap was down to a single stroke.

Zalatoris holed from 25 feet for birdie on the first and also got up and down from a greenside bunker to birdie the par-five second as Matsuyama pushed his tee shot into the trees on the opening hole.

After punching out on to the fairway and hitting a poor pitch, Matsuyama narrowly failed to save par from long range, but bounced back immediately to birdie the second.

With Zalatoris making a bogey on the third the lead was quickly back to three, but Zalatoris then birdied the eighth just moments before Matsuyama missed from three feet for birdie on the seventh.

However, Matsuyama also birdied the eighth and ninth to take a five-shot lead into the back nine after Zalatoris, who was bidding to become the first player to win the Masters on their debut since Fuzzy Zoeller in 1979, three-putted the 10th.

Matsuyama bogeyed the 12th and was fortunate to escape trouble with both his tee shot and approach to the 13th, where playing partner Schauffele hit a superb second to 10 feet.

But Schauffele was unable to convert the eagle putt and Matsuyama got up and down from left of the green for a matching birdie to seemingly remain in complete command.

Schauffele kept up the pressure with another birdie on the 14th and was given renewed hope when Matsuyama inexplicably went for the par-five 15th in two and fired his approach over the green and into the water.

Matsuyama’s bogey and a fourth straight birdie from Schauffele meant the lead was just two, only for Schauffele to amazingly pull his tee shot on the 16th into the water.

A triple bogey ended Schauffele’s chances despite Matsuyama three-putting from the top tier and Matsuyama had the luxury of being able to bogey the last and secure the title.

Matsuyama won the Silver Cup awarded to the leading amateur in 2011, although remembering what else happened on that Sunday would not have done him any favours as he prepared for the final round.

Like most people, Matsuyama would have been expecting to share the presentation ceremony in Butler Cabin with Rory McIlroy, the Northern Irishman holding a four-shot lead of his own heading into the final round.

Instead, it was South Africa’s Charl Schwartzel being helped into the famous green jacket by 2010 champion Phil Mickelson, McIlroy having imploded on the back nine in a closing 80 to finish 15th.

A better omen for Matsuyama was that the last player to hold a four-shot lead after 54 holes of the Masters was Dustin Johnson, who converted it into a five-shot victory just five months ago.

And just eight days ago there had been Japanese success at the same venue, Tsubasa Kajitani winning the Augusta National Women’s Amateur in a play-off against Emilia Migliaccio.

Matsuyama’s victory made it an impressive double and the location of his breakthrough win could hardly be more fitting.

“Winning the 2010 Asia-Pacific Amateur Championship gave me the opportunity to play in the Masters,” Matsuyama said last year. “Making the cut at the 2011 and 2012 Masters was the key in giving me the confidence I needed to know that I could compete someday on the PGA Tour.”