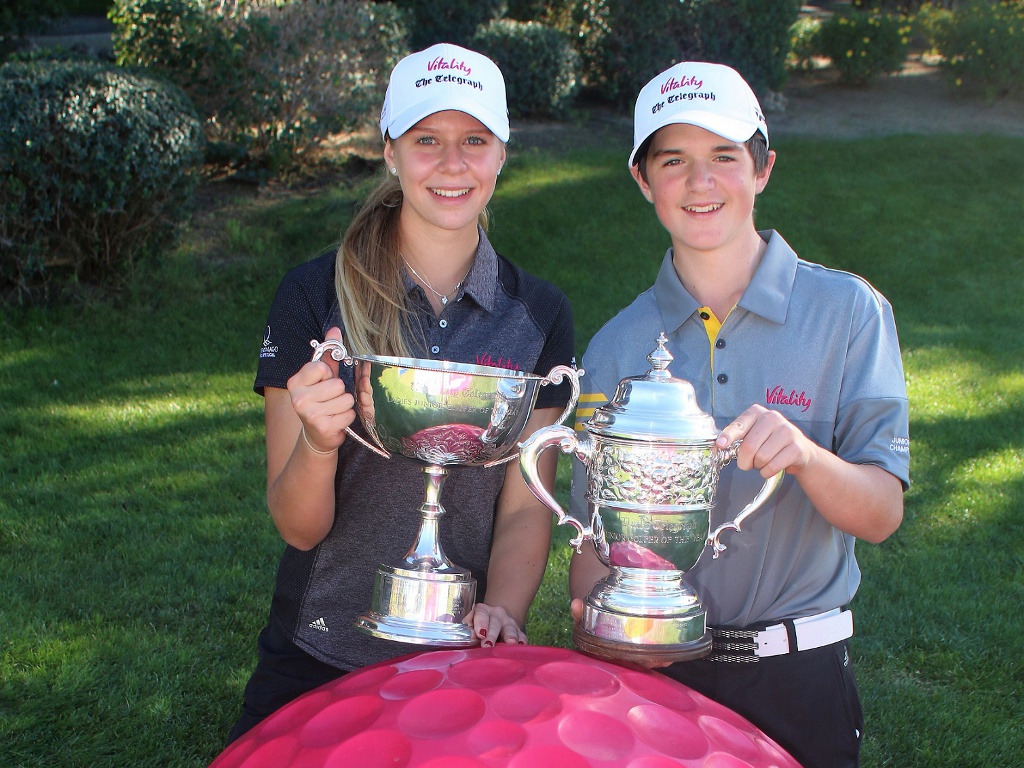 The pair take the crowns from holders Harry Goddard and Hannah Screen, who were unable to match their heroics of last year from a field of 21 competitors.

Despite his tender years, Hopkins from Bishop’s Stortford, kept his nerve during the three-day event to post scores of 71, 72 and 71 on Quinta do Lago’s highly-acclaimed North Course to finish two-under par and three shots clear of runner-up Ben Jones from Brampton in Northamptonshire.

The 5ft 5ins starlet admitted: “That was my greatest win. It will take time for this to sink in. I had a few nerves on the short putts I had but I wasn’t nervous coming up the last as I knew the other scores.”

Hopkins, who finished second in the English Boys’ Under-16 Amateur and third in the North of England Boys’ Open this year, showed no nerves throughout by not registering a single three-putt throughout the 54-hole event, despite having to contend with some lightning-quick greens.

“Two putting takes a lot of shots off and that’s the thing that has done it for me as I haven’t played great this week,” he added.

Hopkins and co-overnight leader Alfie Fox, from London, remained level-pegging on the second day before a drama-fuelled sixth hole changed the complexion when South West Denton’ James Wilson dropped three shots after trouble in the trees.

And Fox’s hopes crashed on the 11th hole when the Londoner lost his ball and then carded a nine after failing to get to grips with the green.

Fuller’s route to glory was somewhat more comfortable as she saw off the highly-rated Lily May Humphreys, 15, the British Amateur Girls’ champion, into second place for a second-year running.

The 15-year-old, who first picked up a club at the age of three, plays off three, bettered elder sister, Sammy, a runner-up in the Algarve event in 2013.

“This is close to the biggest win of my career,” said Fuller, the English Girls’ Under-16 champion.

With a seven-shot lead at the turn, Fuller really turned the screw as she mustered five birdies in all, including a fine greenside chip in at the penultimate hole.

“This is such an honour,” she added. “There are so many who have won this and gone on to win big championships. One day I hope I can follow in their footsteps.”

Officially opened by McGinley in October 2014, the 6,156m North Course layout has quickly risen to become one of the new stars of European golf, and played a key role in Quinta do Lago be named as Portugal’s best golf resort in Golf World’s inaugural rankings of the Top 100 Resorts in Continental Europe 2016/17.

Now in its 33rd year, the 54-hole stroke play Telegraph Vitality Junior Golf Championship, which was hailed by 2014 European Ryder Cup captain Paul McGinley as one of junior golf’s Majors, is to take place on Quinta do Lago’s redesigned North Course. Officially opened by McGinley in October 2014, the 6,156m-layout, one of three championship courses at the resort, has quickly risen to become one of the new stars of European golf.
The North Course played a key role in Quinta do Lago being named Portugal’s best golf resort in Golf World’s inaugural rankings of the Top 100 Resorts in Continental Europe 2016/17.

A multi-million-pound investment has led to a number of high-profile additions, strengthening the Algarve destination’s reputation as the world’s leading sport and leisure destination – both on land and on water. The Campus, a state-of-the-art sporting facility, is the latest inclusion that aims to provide the perfect training base for both beginners and world-class athletes in all fields.

Quinta do Lago, home to 10 highly-acclaimed restaurants and celebrating its 45th anniversary, has long been famed for its culinary delights. The Bovino is one of the best-loved dining experiences in the Algarve, complementing the sophisticated setting of Casa Velha and the hugely popular Shack, one of the coolest spots around, which is situated on the lake’s shoreline.

Located just 15 minutes from Faro airport, the resort is the official winter training base for England Golf’s elite squads and situated in the tranquil and naturally beautiful setting of the Ria Formosa Natural Park, offering a choice of high-quality accommodation options. The recent acquisition of The Magnolia Hotel adds to the already impressive array of luxury villas that are available for rental or purchase.

For more details about the 2017 Telegraph Vitality Junior Golf Championship, call 0344 693 1885 or go to http://www.telegraph.co.uk/sponsored/sport/juniorgolf/