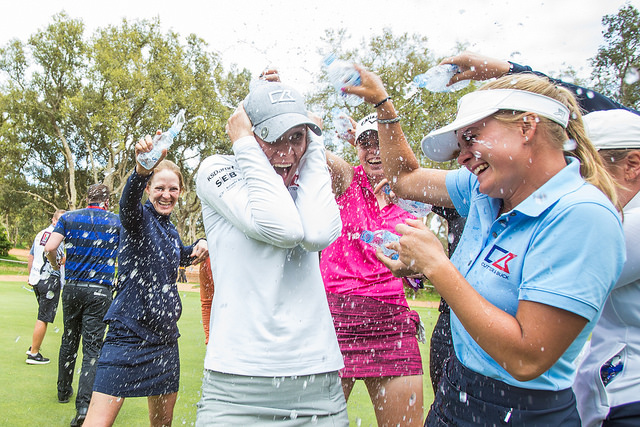 Haglund carded a final round of 2-under-par 70 to set a target of 3-under 285 which defending champion Klara Spilkova and overnight co-leader Sarah Kemp matched before Haglund won the play-off.

The 24-year-old arrived in Morocco off the back of her Symetra Tour debut two weeks ago, an appearance that had reaped tied seventh. It was the fourth top 20 finish of her 2018 season, tying the number she recorded as a rookie on the LET in 2017.

With victory she tops that number and leaps to the top of the Order of Merit. She earned it the hard way, too, prevailing over her play-off opponents with birdie at the second extra hole courtesy of a 272-yard drive, an approach to four feet and a successful conversion.

Before that she had completed a level-par front nine before beginning her tilt for the title on the home stretch, making three quick birdies, dropping a shot at 16, but rebounding in those extra holes.

“When I made those three birdies on the back nine, going into 16, I knew I had a chance, because I saw the leaderboard by the green,” she said. “I kept going and played my game and it was enough to get me into the play-off.

“The last drive was a bomb. I was just in the moment, I wasn’t shaking, but I was shaking after the ball was in.

“It will definitely build a lot of confidence. I’ve been working on that part a lot so I’m very happy to be standing here and I’m very proud of myself.”

.@JennyHaglund makes 🐥 on the 2nd play-off hole to win the 2018 #LallaMeryemCup 🏆

Kemp hard scrapped through the front nine, playing it in 1-over, but a chip-in birdie at the tenth righted her scorecard. Alas she found the hazard from the 11th tee, made double bogey and thereafter couldn’t find the one birdie which would have earned her the trophy as she carded a 2-over 74.

“I’m obviously a little disappointed,” she admitted. “I didn’t play as well as I had the past few days, but my goal this week was to put myself in contention and I did that, so it’s my equal best finish out on the Ladies European Tour and all in all it’s been a great week.

“I actually really enjoyed the play-off. I was nervous, but I had a really good time. I hope that I get that opportunity again and hopefully I can do something different. All in all, I achieved my goal for this week and the more I’m in this situation the better I’ll get at it.”

Spilkova was also left with mixed feelings after her 72. A pair of front nine par-5 bogeys hurt her chances, but a duo of back nine par-5 birdies got her back into contention. She also confessed to wildly swinging reactions to the experience of defending the Cup.

“I have so many emotions right now because I’ve been so nervous since last week,” she said. “I wasn’t nervous at all today though and then I came to the final green and I felt crazy nervous. It was a great performance and I’m really thankful.”