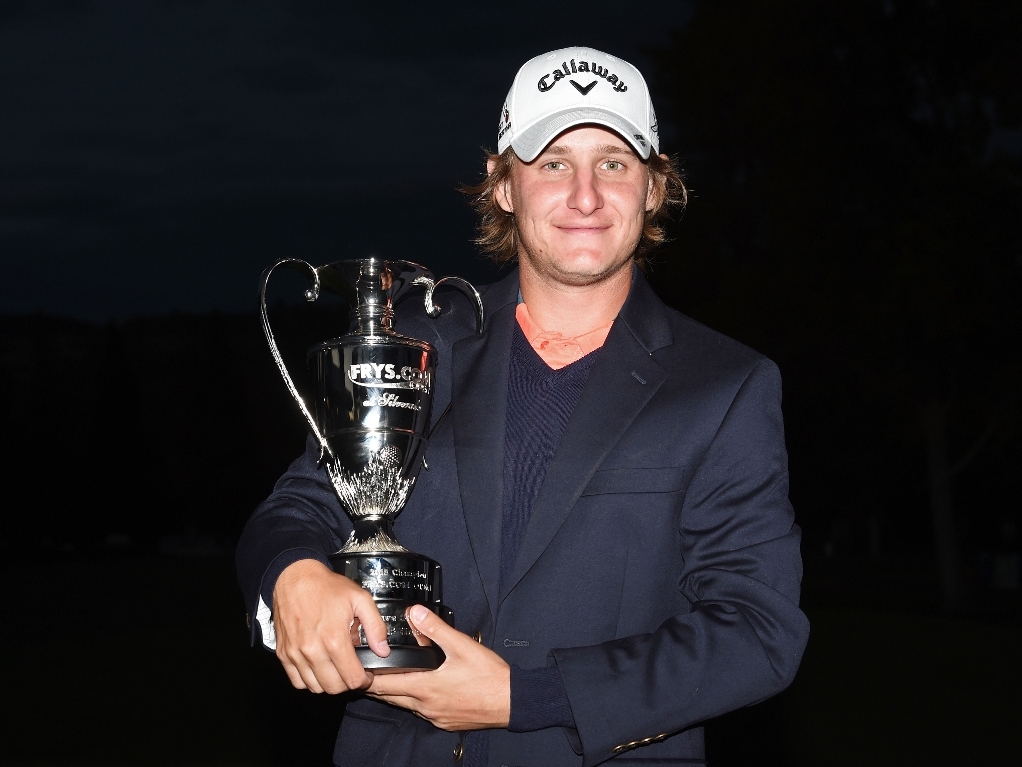 Emiliano Grillo defeated Kevin Na in a two-hole play-off to win the Frys.com Open on Sunday, in what was his first tournament since gaining his PGA Tour card.

Grillo triumphed at the Web.com Tour Championship two weeks ago to earn his Tour card, and he wasted little time in making his presence felt.

After Grillo and Na had finished level on 15-under, extra holes were required to determine a winner, and it was Grillo who held his nerve to claim the victory.

Having returned to the 18th for the first play-off hole, the pair recorded pars at the par-five last, with Grillo missing a three-foot birdie putt that would have handed him the title. Grillo would make no mistake when they took to the 18th for the third time on Sunday, as the 23-year-old notched up a birdie when Na could only manage a par.

Grillo had begun the day strongly with three birdies in his first six holes, before taking the turn in 34 after a bogey at the ninth. He picked up a further shot at the 10th courtesy of an incredible 49-foot chip-in from the green side bunker, but bogeys either side of a birdie at the 13th stymied his progress.

Showing nerves of steel normally associated with a veteran, Grillo holed a clutch 24-foot birdie putt on the 18th hole to become the first player to reach the 15-under mark as he rounded out a 69.

Playing in the final group of the day, Na started poorly with two birdies and three bogeys on the front nine. A bogey at the 11th appeared to signal further woe, but the American bounced back to birdie four of the next six holes, including a birdie four at the last to move to 15-under and set up a play-off.

Tyrone Van Aswegen, Justin Thomas and Jason Bohn finished in a tie for second on 14-under, with all three men sure to feel they too could have made the play-off.

It was a case of too little, too late for Van Aswegen as two birdies in the last three holes and a round of 68 saw the South African fall just short after initially posting the mark to beat in the clubhouse. Thomas meanwhile lipped a 32-foot birdie putt at the last to finish one back, while Bohn was left to rue a bogey at the 16th.

Overnight leader Brendan Steele was unable to complete a wire-to-wire victory after plummeting down the standings after a closing round of four-over par 76 saw him finish in a tie for 17th.

World number seven Justin Rose looked set to move into contention after beginning his round by holing a superb 55-foot birdie putt at the second, but a further four birdies were cancelled out by five bogeys in a round of 72 which was enough for a tie for sixth with Charl Schwartzel and Patrick Rodgers on 12-under.