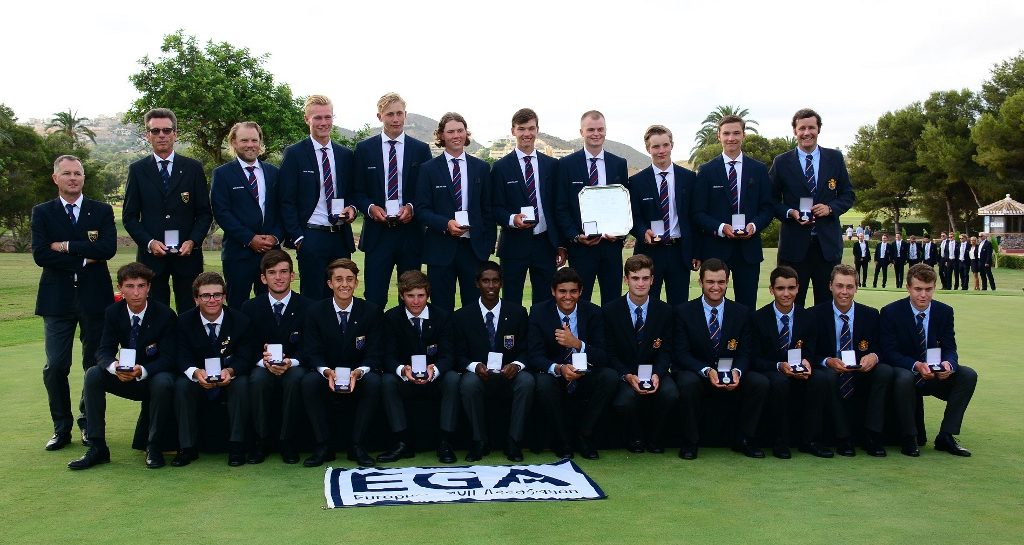 Spain’s dreams of golfing glory on home soil were ended in dramatic fashion as Denmark defeated them on the final hole to win the 2017 European Under-18 Boys’ Team Championship at the world-famous La Manga Club resort.

The multi award-winning venue, in Murcia, south-east Spain, was hosting the prestigious event for the first time in its history, with players from 16 countries gathering at the resort for the chance to succeed France as champions.

Spain’s six-man team – who last won the title in 2011 with a side that included one of the new stars of world golf, Jon Rahm – made an impressive start on La Manga Club’s acclaimed South Course and, having qualified for the quarter-finals in first place, they then comfortably beat Ireland and Italy to book their place in the final.

Standing in their way for the title was Denmark, who recorded narrow 4-3 victories over England and Sweden in the last eight and semi-finals, and it was the Scandinavians who started the final the better, taking an early 2-0 advantage to leave Spain having to win four of the final five matches to claim an unlikely win.

Cheered on by a patriotic home crowd, the Spanish fought back bravely to level the tie at 3-3 with just one match remaining between Gonzalo Leal and Rasmus Neegaard. Leal holed a courageous putt on the penultimate hole to take the match down the last, but Neegaard held his nerve the best on the par-five 18th hole to close out victory, much to the delight of his teammates.

Eduardo Ruiz, director of golf at La Manga Club, said: “It was a pleasure and privilege for La Manga Club to host some of the best young players in European golf, and what an amazing finish.

“The standard of golf played throughout the event was of the highest quality. The course was presented in outstanding condition and the resort was delighted to be given the chance to demonstrate once again why it is perfect for staging high-profile tournaments of this nature.“

A five-time host of the Spanish Open, La Manga Club is set across an area of 1,400 acres and has been at the forefront of European sports and leisure destinations since its inception in 1972.

Featuring three 18-hole golf courses, a nine-hole academy course and outstanding practice facilities, the resort – which will host the 2017 World Golf Awards in November – has enjoyed a rich golfing history over the last four decades.

Golfing legends Gary Player, Arnold Palmer and Seve Ballesteros all figure prominently in its past, while its array of other outstanding sports and leisure amenities, bars and restaurants has helped establish it as a firm favourite with golfers worldwide.

For more details on La Manga Club and to book, please visit www.lamangaclub.com