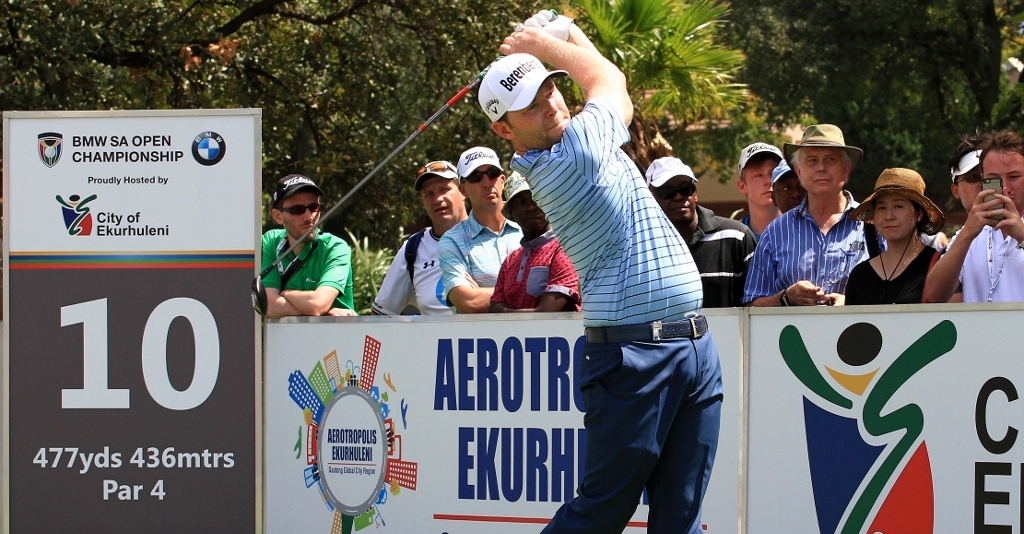 Branden Grace was poised to strike on Friday when a storm ended play for the day in the second round of the BMW South African Open Championship.

He was on eight-under-par for the tournament, with 11 holes of his second round complete, and in a share of the lead with Keith Horne as the sirens sounded to bring the players and the fans off the course at Glendower Golf Club. Grace had made six birdies and one bogey in his round so far, and he was looking very likely to pull clear in the holes remaining in his second round.

“It was the putter that did the trick out there,” said Grace, with particular reference to holes, three, four and five (four and five being long par-fours) which are among Glendower’s toughest.

“At three I hit a five-iron to about 15 feet and managed to roll that in for a two, then at four it was three-iron, eight-iron to 20 feet and I knocked that one in too.

“So the putter was working and when I hit a four-iron into the green at the fifth and found the hole from about 25 feet for my fourth straight birdie I was in a roll, before that three-putt for bogey at six kind of put my little run to an end.

“But I came back by sinking good putts at both 11 and 12 for birdie before we were called off. So, yes, overall it was a pretty good day with the short stick and I feel I’m right in there.”

But it was Horne who had completed his second-round action, and his three-under-par 69 had set the clubhouse benchmark and set him up for the weekend. “You can’t complain when you’re leading the SA Open,” he said. “No matter what the other do, I’m happy with my first two days. Whether they go past me or way past me, there are still two days to go so we’ll concentrate on that and like I said I’m very happy with eight-under after two days.”

Before Grace was churning out the birdies, Horne was making sure he kept bogeys off his card. That was a successful venture, but he was less pleased that he didn’t pick up more shots. “The one disappointing thing I had today was that I played all the par fives… I parred all of them,” he said. “They were all reachable except for 13. They were all reachable in two so that was a little disappointing, but other than that I’m pretty chuffed with my game.”

Horne and Grace held a one-stroke edge over Jbe’ Kruger, who backed up his opening 67 with a two-under 70.

Play in the second round will resume at 6.30 am, with third round play not starting before 11am.