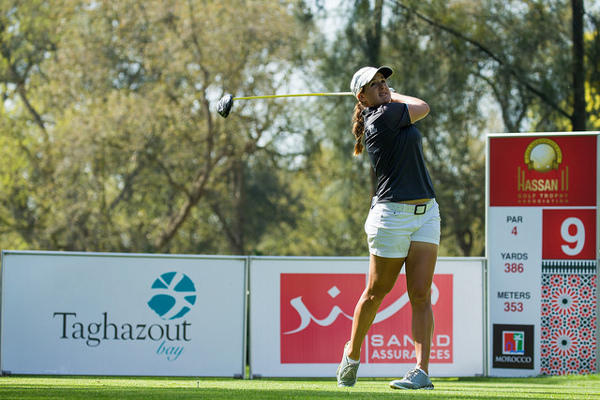 Five thousand miles, and very nearly the entire land mass of a continent, separates Morocco from South Africa, but for Gauteng resident Nicole Garcia there is one detail of Royal Golf Dar Es Salam which is very familiar to her: the green, green grass of home.

The 27-year-old South African leads the Ladies European Tour’s Lalla Meryem Cup by two strokes after a patient first round of 4-under-par 68, the secret of which lay not in Ben Hogan’s fabled dirt, but in the grass atop of it.

Most grass is green, of course, but beyond that not all grass is equal.

Kikuyu, the strain which features on the fairways and in the rough at this week’s venue, is a tropical perennial with sticky qualities that can fool those unfamiliar with it, maybe more so when, as this year’s defending champion Klara Spilkova revealed, it is deeper than 12 months ago.

Garcia, however, was brought up playing on it in the Johannesburg region and that familiarity helped her plot the bogey-free circuit which left her clear of compatriot Stacy Lee Bregman and the Germans Laura Fuenfstueck and Isa Gabsa.

Magic start in Morocco for @Nicole_Garcia72 carding a bogey free 68 to take the early #LallaMeryemCup lead on -4 🙌🏻 pic.twitter.com/c6gkVF3nbu

“Hitting out of the semi-rough was tricky today,” she said after her lap of the Blue Course. “And chipping from around the greens is very different, as well. Kikuyu is quite spongey underneath whilst in Europe it is often firmer so your chipping action changes. If I go straight from home to, say, the Scottish Open it takes me a few days to adjust.”

There no need for such accommodation this week because Garcia has spent the last month playing a selection of Johannesburg tracks with training-mate Bregman, the pair specifically seeking a variety of courses to avoid repetitious shot options at over-familiar venues.

In posting nine front nine pars and converting four birdies from inside 15-feet on the way home Garcia broke free of the field for a slender early advantage and maintained her fondness for this part of the world.

She was second in this event at Golf de L’Ocean in 2015, her career-best finish on the LET, and also won the first stage of 2014 Q School over the road on the Red Course

“When I won first stage I think I was the only girl who came from South Africa,” she said. “Everyone else had come from Europe and I think I picked up a few shots on the field because of my knowledge.”

The green, green grass which Tom Jones so longed for was overlooked by an old oak tree. Royal Golf Dar Es Salam is home only to cork trees and many of them. Garcia won’t object a change in the lyric if the Kikuyu continues to remind her of home.