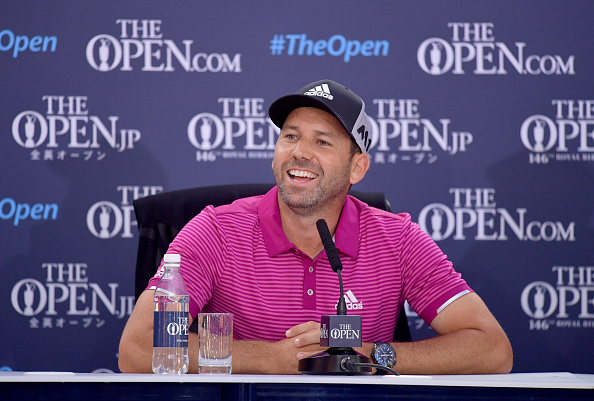 Sergio Garcia arrives at The Open on the back of a wave of Spanish sporting success hoping to double his major trophy tally following his April Masters win.

Garcia will be teeing off at The Open for the 21st time as he attempts to add the old Claret Jug to his Green Jacket.

It would also be a personal treble this year for the likeable veteran, whose Masters win came after victory at February’s Dubai Desert Classic.

Add that to recent Spanish dominance on the tennis courts with Rafael Nadal’s French Open success and Garbine Muguruza’s triumph last week at Wimbledon – and it seems like everything is going Spain’s way.

“It’s been a fun year for Spanish sports,” said Garcia.

“But for Spanish golf it’s been great. I want to say it’s probably the winningest year we’ve had for Spanish golf between the PGA Tour and European Tour, or one of them. So it’s very exciting to see guys you’re friendly with winning and fellow countrymen doing great things.”

Garcia already has 10 top-10 finishes at The Open, including two runner-up finishes in 2007 and 2014, and would dearly love to add The Open to his trophy collection, although he wouldn’t say if it would mean more to him than his beloved Green Jacket.

“It’s difficult to say,” he said. “I think they’re both amazing. At the moment, the green jacket means more because I have it, but everybody knows how much I love the Open Championship. I would love at least one of them before I kind of hang up the boots.

“It’s definitely something I would like to achieve. We’re going to give it a shot this week. But that’s like saying who do you love more, your dad or your mom? So it’s a difficult question to answer.

“Winning the Masters was amazing and it does give you a little bit of extra confidence, and I’ve been having a very solid year.

“I’m obviously excited about it. I’m confident about my possibilities, but I can’t tell you if I’m going to be right up there on Sunday with a chance. I’m hoping that I will be but unfortunately it doesn’t work like that every week. At the end of the day you also have to realise that after winning Augusta you still want to push hard and get more majors.”

Garcia is an 18/1 shot with Betsafe to lift the old Claret Jug, and you can read our exclusive betting preview of the tournament here.

Sergio Garcia The Majors The Open