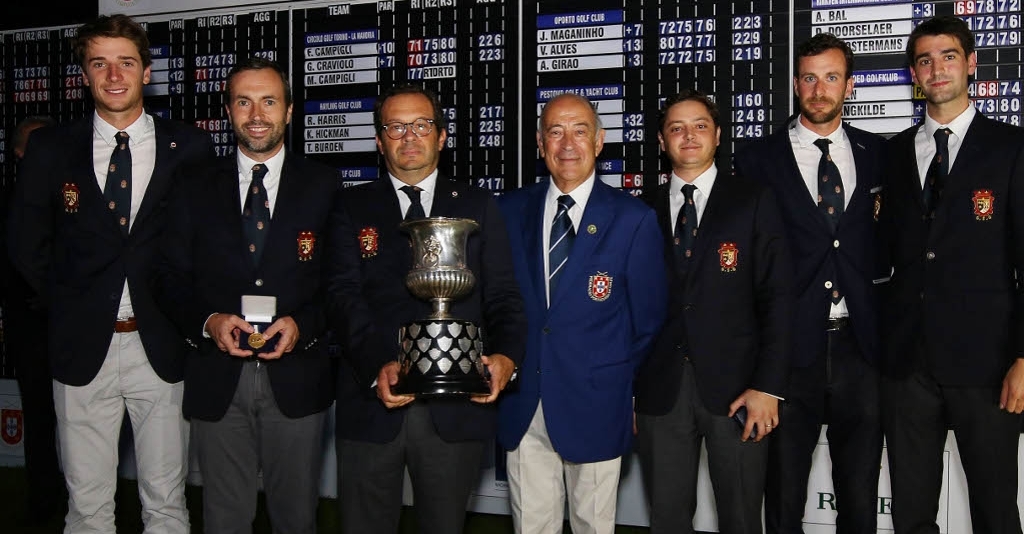 Portugal’s Aroeira resort provided a fitting venue for a thrilling climax to the 2016 European Men’s Club Trophy as French club Golf St Germain en Laye survived a final-day wobble to earn their country a fifth win in the last seven years in the prestigious golf event.

Twenty-four clubs from 23 European countries gathered at the famous Lisbon venue for the 41st edition of the 54-hole amateur strokeplay competition – often compared to golf’s version of the UEFA Champions League.

Aroeira, the 36-hole complex managed by ORIZONTE – Lisbon Golf, earned widespread praise from everyone involved for its outstanding facilities and course condition after the nail-biting finish.

The Golf St Germain trio of Thomas Perrot, Thomas Faucher and Romain Payet looked to be cruising to victory as they raced into a seven-shot lead with just one round to play, with the Scottish team of  Chris MacLean, James Wilson and Neil McConnochie, from Balmore Golf Club in Glasgow, their nearest challengers.

But, led by MacLean – who finished joint-top of the individual standings, including a run of six birdies in his final 10 holes – Balmore quickly made inroads into the runaway leaders’ advantage and there was only one stroke separating the two teams at the finish, with Golf St Germain clinching the title with a final total of 15-under-par.

There was some consolation for the Scots as they finished ahead of the other home nations taking part, with England (Hayling GC) 13th, Ireland (County Sligo GC) 16th and Wales (Radyr GC) 19th.

The event was played over three days on Aroeira I, venue for the 1996 and 1997 Portuguese Open, with 18 holes each day and the two best rounds from each three-man team counting towards the overall score.

Carlos Cortes, from ORIZONTE-Lisbon Golf, said: “The competition was organised in record time and it was a pleasure for ORIZONTE to host it. Everything went very well and I believe that in the future we will see some of these players on the professional circuit."

MacLean added: “The event was played on a great golf course and which was in good condition.”

Aroeira was recently included in Golf World magazine’s inaugural list of the ‘Top 100 Golf Resorts in Continental Europe 2017’. Fresh from the magazine including Aroeira I in its benchmark ‘Top 100 Courses in Continental Europe’ rankings last year, the famous Portuguese venue has won new acclaim after being rated 97th in the new poll.

The new accolade is further recognition for the extensive golf course maintenance programme that ORIZONTE has undertaken at Aroeira over the last two years. Improvement work has included upgrading the fairway and putting surfaces, renovating cart paths, reconditioning the irrigation and pumping systems and rebuilding the majority of the tees boxes.

Aroeira I and II, created by Frank Pennick and Donald Steel, meander through impressive stands of tall pine trees, reminiscent of some of Surrey and Berkshire’s finest old clubs. As well as hosting two Portuguese Opens, the courses have, between them, staged many other high-profile tournaments including several Ladies’ European Tour events and, in 2013, the prestigious European Men’s Club Trophy.

Aroeira is part of ORIZONTE – Lisbon Golf, which offers the chance to play six of the leading courses in close proximity to Portugal’s capital, together with exceptional value for money on a wide range of accommodation options across the region.