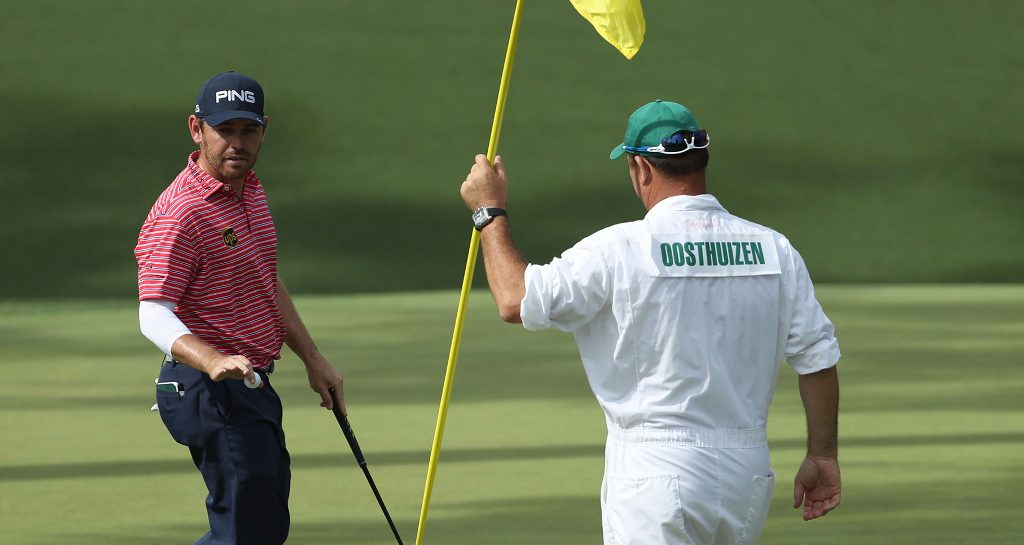 Francesco Molinari, Jason Day, Adam Scott, Brooks Koepka and Louis Oosthuizen all share the lead after the second round of the Masters, while Tiger Woods is among those just one shot back.

The five-man group lead the way on seven under par, with former runner-up Oosthuizen making the biggest move of the day with a six-under-par, seven-birdie-one-bogey 66.

The South African came very close to winning the Masters back in 2012 only to be denied by Bubba Watson who played the shot of his life to escape from the trees during a play-off.

The weekend arrives with a leader board full of major champions and major talents. #themasters pic.twitter.com/dWF3ozgf4j

Meanwhile, reigning Open champion and Ryder Cup hero Francesco Molinari is back in the running for another major championship after joining the leaders following a 67.

Then there’s the major-winning Aussie duo of Jason Day and Adam Scott, who joined the leaders following rounds of 67 and 68 respectively. Day won the PGA Championship in 2015 and Scott the Masters in 2013, so like Oosthuizen, a former Open champ, they both know what it takes to win a major.

.@JDayGolf carded six birdies on his way to a second-round 67 that earned him a share of the lead. #themasters pic.twitter.com/x0jIlhEldl

Of course, the same can be said of Molinari and certainly Koepka, who has won two of the last three majors he’s played in. Co-leader overnight, a one-under 71 ensured he grabbed a share of the lead on Friday.

It’s not just about the leaders, though, with another star-studded group of four following a shot behind on what is a crowded leaderboard.

Tiger Woods thrilled the Augusta crowds with a four-under-par 68 to move within a stroke of the lead, joining World No 2 Dustin Johnson (70), South African rookie Justin Harding (69) and four-time PGA Tour winner Xander Schauffele on six under. Schauffele’s round of 65 was the lowest of the day.

The quartet lie one shot clear of a pair of Ryder Cup heroes, Ian Poulter (71) and Jon Rahm (70), while American duo Matt Kuchar (69) and three-time Masters winner Phil Mickelson (73) are among those on four under, three back.

As many as seven players lie on three under, including Justin Thomas (68), Rickie Fowler (71) and co-overnight leader Bryson DeChambeau, who could only manage a 75 on Friday but is still in the ghunt.

As for pre-tournament favourite Rory McIlroy, a one-under-par 71 saw him finish on level par, seven back, and he will probably need to make a serious charge on Saturday to play his way into contention.

It seems just about every big-name player in the game has turned up for this year’s Masters, and it’s set the stage for an absolutely fascinating weekend of golf ahead.