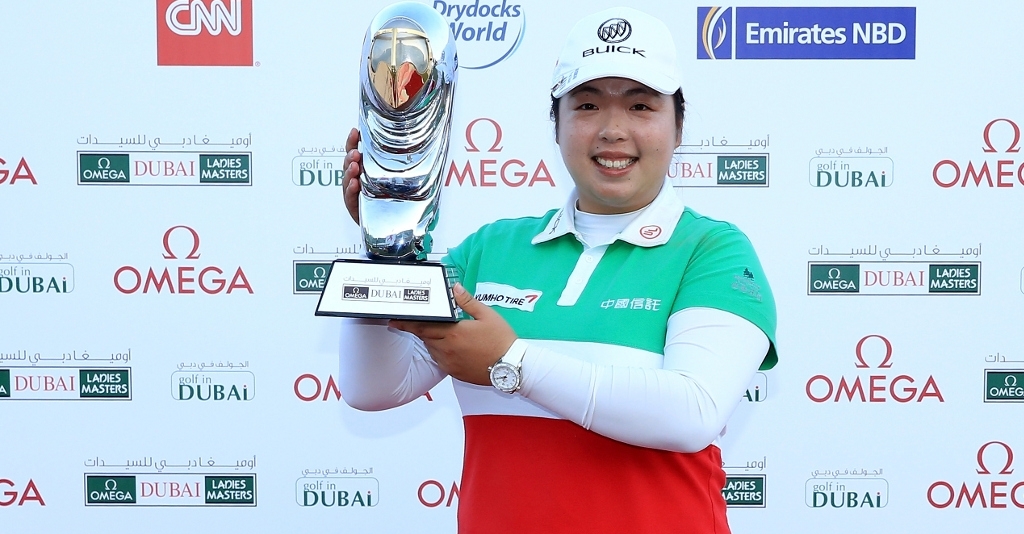 The landmark 10th edition of the event came to an end on Saturday, with Feng putting the final touches on a truly dominant performance to finish all of 12 strokes clear of her nearest competitor.

“I am really delighted to win in Dubai, which is a lucky place for me,” said the 26-year-old.

A good five shots in front at the start of the day, Feng conjured another piece of magic on the Majlis course, going bogey-free in her final round of 66.

Her target was 20 under par, but she surpassed her own goal with a birdie on the iconic 18th hole to seal her third win in the event and equal her own record of 21 under par.

“Coming to this tournament my goal was a top-five finish and I’m delighted to exceed my expectations. Dubai has been really good me, a lucky place, indeed,” said Feng, who made three birdies in each half.

“It wasn’t easy out there in the windy conditions, but I kept my composure and got the job done in the end."

Thailand’s Thidapa Suwannapura, who shot a final round 73, finished second on nine-under par with England’s Melissa Reid a stroke back in third.

Winning the Omega Dubai Ladies Masters was the icing on the cake for Shanshan Feng, who has also become the first player from China to win the Ladies European Tour’s Order of Merit.

Feng now boasts 15 career wins, including five on the Ladies European Tour, since turning professional in 2007.

“We are, indeed, privileged to have the official patronage of HRH Princess Haya, who herself is an accomplished sportswoman. Her support has been vital to the growth of this tournament,” said Mohamed Juma Buamaim, vice  chairman and CEO of golf in DUBAI.

“In line with Dubai’s commitment to encourage women to take to sporting activities for healthy living, we organised “pink day’ on Friday to raise awareness about breast cancer and support initiatives of Al Jalila Foundation Research Centre. I would to thank all players for their enthusiastic support to the noble cause,” he said.