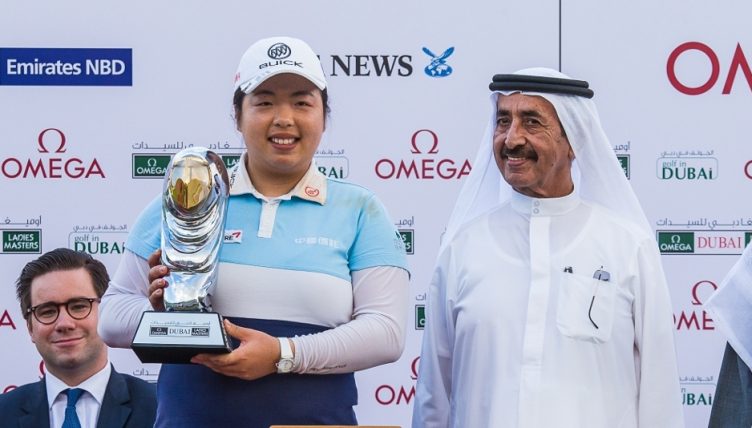 Her putter on fire, Shanshan Feng produced a compelling fightback, carding a magical eight-under 64 to win the Omega Dubai Ladies Masters for a record fourth time in five appearances at Emirates Golf Club on Saturday.

Starting the final round a good five shots off the pace, China’s most decorated golfer reeled off five birdies on the front nine and four coming home to reach 10-under for the tournament, claiming the season-ending Ladies European Tour event by a good two shots ahead of England’s Charley Hull, who climbed up the leaderboard with a brilliant closing 65.

“I'm really happy that I actually brought out my A Game today,” said a jubilant Feng after receiving the iconic trophy from the present dignataries.

“I knew that it was going to be windy and I knew that playing in the wind is one of my strongest parts. So even though I was five behind, I always thought that maybe I would still have a chance to win. I tried my best and an 8-under was a pretty good score,” said Feng, who first won the title in 2012, and then again three times consecutively from 2014.

The genial Chinese golfer flew out the gate in style, rolling in six birdies in her first 10 holes and that hot streak took the world number four to with one stroke of the lead, held by held by the overnight leader Felicity Johnson.

Another three straight birdies from the ninth gave her a one-stroke advantage and it was effectively all over when she made her eighth birdie on the 14thhole to hit 10-under-par in total, before ending with four straight pars.

For Feng, this was her seventh Ladies European Tour victory and her fourth title of the season, following the Buick Championship, Sime Darby LPGA Malaysia and TOTO Japan Classic, as well as Olympic Bronze at Rio 2016.

Tied for 23rd on one-under overnight, England’s Charley Hull made her presence felt with a flawless final round.

“It could have been a really good score, but missed a lot of putts. I also holed good putt and that kind of evened itself out. It was really windy out there. So I'm quite happy with my score in the conditions.”

India’s Aditi Ashok ended in a tie for third with England’s Florentyna Parker on six-under-par and sealed Rookie of the Year honours.

“It was pretty solid. I actually didn't start very well. I was one over after four holes. All four were actually birdie-able with the tailwind. So I didn't really make use of that.

“Things were better on the back nine which I covered in two-under. I'm happy with two-under scores three days in a row. I feel it was consistent but it could have been better. But there's always something you can do better every week. So it's fine.”