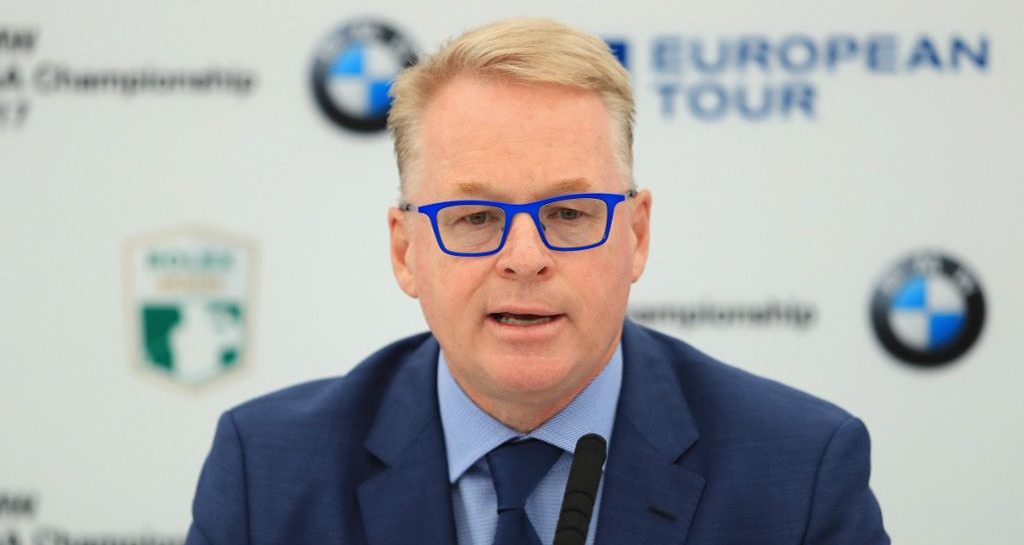 The European Tour and PGA Tour on Friday announced a new partnership which will see them work together on scheduling and playing opportunities for members.

The PGA Tour will acquire a minority investment stake in European Tour Productions, which produces and distributes the Tour’s content, and its commissioner Jay Monahan will also take a seat on the board of the European Tour.

Pelley was quick to note, however, that the European Tour’s “robust financial health” means a takeover by the PGA Tour is not “inevitable”.

“It definitely heralds a significant new era for global golf,” he said. “The way I’ve characterised it is that the PGA Tour moves from a competitor to a partner.

“Emphatically, this is not a merger. A merger would only happen for two reasons; one is if the Tour had financial difficulties and two that there were significant benefits for the members.

“I read one tweet that said a takeover is inevitable because of the situation that we are in. I find that staggering, somewhat tiring and a great example of a story that perpetuates itself with no facts.

“We are categorically not in financial difficulties, that is simply wrong. We are in robust financial health, with a strongest ever balance sheet and a strong supportive network of partners.

“We have played 23 events since July, creating 15 from scratch, and at the same time funding a healthy strategy and Covid testing (costing) another £3million.

“If this was a merger or a pathway to a merger, it would have to have significant benefits for our members (players), because for in order for a merger to ever happen it would need 75 per cent of the membership vote and consensus.

“This is day one of a partnership.”

Negotiations had been taking place for months but were complicated by an alternative offer from the Raine Group, a private equity firm behind the proposed Premier Golf League (PGL).

Under the PGL’s proposals outlined in January, 48 players would compete in an 18-event season offering a total prize fund of £183million, but Rory McIlroy, Jon Rahm and Brooks Koepka – at the time the top three ranked players in the world – all ruled themselves out.

Pelley added: “Raine Capital presented a very compelling offer to take the European Tour to another level, but in a different direction.

“Ultimately we felt partnering with the PGA Tour was the best option for our members and for global golf, a decision that was made unanimously by the board of directors.”

Pelley also admitted that there is the “realistic possibility” of having co-sanctioned events with the PGA Tour on European soil in the future, but was unable to provide further details.

Speaking about how the deal had come about, Pelley added: “We shared the challenges of working through a year neither of us could have ever imagined and we found definite synergies in many areas of our respective Tours.

“That gave us the impetus to move forward together and arrive at this momentous announcement we are making today.”