Europe finish with a flourish 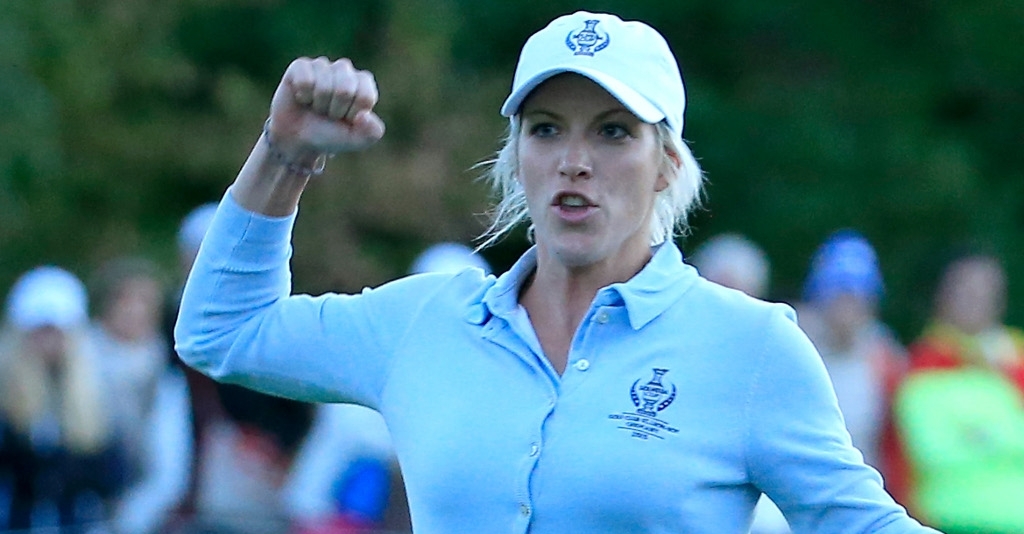 Europe produced a birdie fest to claim a two-point lead over America before bad light halted play with two games still on the course at the end of the first day of the 14th Solheim Cup at St Leon-Rot.

The two sides shared the morning foursomes 2-2 but Anna Nordqvist and Caroline Hedwall and then Charley Hull and Gwladys Nocera won their fourball matches to give their side a precious 4-2 lead at close of play.

The fourball series will continue at 7.45 tomorrow with the other two games tantalisingly poised. German duo Caroline Masson and Sandra Gal are favourites to extend Europe’s lead after finishing at one up through 15 holes against Gerina Piller and Brittany Lang while the other game halted in dramatic fashion when Carlota Ciganda holed a nine iron from 135 yards on the 17th to ensure that she and her partner Mel Reid will go down the last tomorrow morning all square with Cristie Kerr and Lexi Thompson.

Even the most creative of script writers would be hard pushed to construct such an intoxicating plot.

Paula Creamer and Morgan Pressel beat Nordqvist and Suzann Pettersen in the morning foursomes but it was a different story after lunch when they came up against Nordqvist and Caroline Hedwall in the fourballs.

Hedwall created history two years ago when she won all five of her games in Colorado but on this occasion most of the damage was done by fellow Swede Nordqvist as the top European couple cruised to a 4 & 3 victory over their American rivals.

Nordqvist’s golf was exceptional as the Swedes registered Europe’s first point of the afternoon. She birdied the second to halve the hole with Pressel and then birdied the third, seventh, eighth, 10th and 11th before Hedwall carded a birdie of her own to halve the 13th with Creamer and consolidate her side’s five hole lead. The same American reduced the deficit to four with a 15-foot birdie putt on the 14th before the match finished with halves in par four on the next hole.

“I hit the ball really well today,” confirmed Nordqvist. “Our game seemed on today. I had a lot of chances and made quite a few putts. It was very exciting.”

“Anna did great,” agreed Pressel. “She was pretty much out on her own today. She was about seven or eight under for the 15 holes we played. I don’t think she missed a shot.

“We certainly didn’t them give much of a fight,” Pressel added. “In best ball you’ve got to make more birdies than we did. We didn’t play our best.”

The 65 minute weather delay meant that it took Nordqvist and Hedwall five hours and 35 minutes to register Europe’s first point of the afternoon and it was another 40 minutes minutes before Charley Hull and Gwladys Nocera added another with a 3 & 2 victory over Angela Stanford and rookie Alison Lee.

Hull was in sensational form as she and her French partner inflicted an eighth successive Solheim Cup defeat on Stanford. The English teenager birdied the fifth to give her side a one hole advantage and then carded seven birdies in eight holes from eighth. Stanford eagled the driveable par four 13th and also birdied the 14th to extend the match but it came to an end when Hull secured a par five on the 16th hole.

It felt great to win,” said Hull. “I felt I played good all day. It was a grey end to the day but I rolled a couple in so it was great. I’m just buzzing for tomorrow.”

“Charley is playing unbelievable,” said her veteran French partner. “It was up to me to play safe and try to make a few putts to help here. It was teamwork. She’s very impressive. She’s the junior and I’m the senior and it’s all right.” The next match to finish for the day featured German duo Caroline Mason and Sandra Gal against Christie Kerr against Gerina Piller and Brittany Lang. Not unnaturally it attracted the biggest crowd and they were treated to some more superb golf from both sides before all four players agreed it was too dark to continue with the European team holding a one hole advantage through 16 holes. At that stage the Germans were seven under par whereas the Americans moved to six under par when Piller birdied to halve the 13th and 14th hole.

The day had produced some scintillating golf and arguably the best was kept to last when Ciganda holed her nine iron on the 17th to ensure she and her partner Reid would be all square when the match resumes on the 18th hole tomorrow morning.

It was would fair to say this match produced fireworks from start to finish with Thompson carding three birdies and an eagle over the first six holes and the Europeans registering four birdies over the same stretch.

The Americans had been two holes up when play was suspended but after the break the Europeans got back to all square with successive birdies on the 11th and 12th before the Americans regained control when they shared birdies on the 13th and 14th. Reid pulled one hole back with a birdie on the 16th before Ciganda’s wonder shot bought a great day to what was a stunning conclusion.

“I had 135 yards to the pin and I was thinking pitching wedge because I thought I could hit it that hard,” said the Spaniard. But my caddie reminded me it was cold and that the ball wouldn’t fly.

“I hit it really good and I’m so happy to help the team. There’s still one hole to play so there is nothing yet but I hope we can add a point to the scoreboard.” It was a good day for us but there’s a long way to go,” said European captain Carin Koch.

“They were all so confident and comfortable on the course. I told them last night to just go out and enjoy the crowds and enjoy the fans and the stage they’re on this week. And I think they all did that. It looked like they were having a lot of fun all day, really. Yeah, I couldn’t be more pleased with them.”

“That was a pretty crazy turn of events at the end,” said US captain Juli Inkster. “We got smoked in the first two matches and were looking good in the third before Melissa made a good putt on 16 and then Carlota holes out on 17.

*The last two matches did not finish due to poor light.