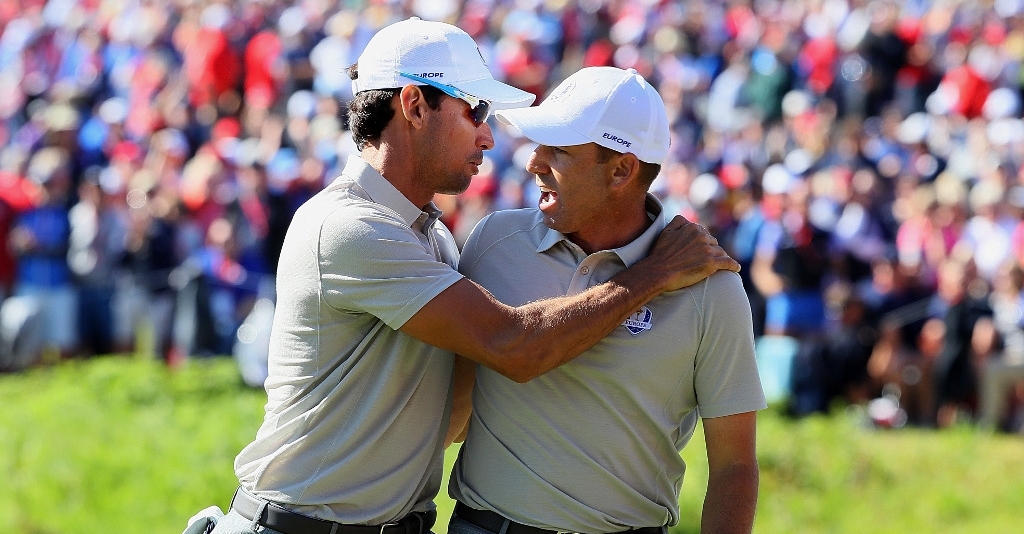 Europe are firmly back in the Ryder Cup reckoning after getting the better of Saturday's morning foursomes at Hazeltine.

Twenty-four hours earlier, Darren Clarke's men were facing a 4-0 deficit, but they've now managed to whittle that down to just one point, with the score currently 6-5 to the USA heading into the afternoon session.

Spaniard Sergio Garcia and countryman Rafa Cabrera Bello were arguably the heroes of the morning for Europe, as they battled back from four holes down late in the game to snatch a valuable half against star American duo Patrick Reed and Jordan Spieth.

The signs were encouraging for the defending champions early on, as the first pair out – Rory McIlroy and Thomas Pieters – raced into an early 3-up lead over Rickie Fowler and Phil Mickelson.

The Americans hit back to win the ninth and 10th to reduce the deficit, but another win at the 12th was offset by a European win on 11.

The match appeared to be in the balance until McIlroy and Pieters were able to pull away over the closing holes, winning three in a row from the 14th to wrap up the 4&2 win.

First point of the day and it's blue %uD83D%uDD35#TeamEurope pic.twitter.com/30tEOvxVq8

The US team responded in the next match, as Brandt Snedeker and Brooks Koepka beat Henrik Stenson and Matt Fitzpatrick by 3&2.

Snedeker and Koepka won the first and fourth holes to go 2-up, but wins on the seventh and 11th holes saw the Europeans restore parity.

The hosts had the last laugh, however, winning the 13th, 15th and 16th holes to complete the comfortable win.

The third match of the morning was a tight affair, as Justin Rose and Chris Wood hung on for a 1-up victory over Jimmy Walker and Jordan Spieth.

After six halved holes, the European duo appeared to take control of the match with wins on the seventh, 10th and 13th.

But Walker and Johnson fought back, winning 14 and 16 to ensure a close finish.

Thankfully for the men in blue, the two Englishmen held their nerve, earning crucial halves on the last two holes – thanks in part to wayward drives from the Americans – to hold on for the point.

Still, the Americans looked set to retain their two-point lead after the final match of the day, with Reed and Spieth appearing in total control against Garcia and Cabrera Bello.

Wins on the second, third, sixth and 11th had seemingly given the American young guns an unassailable lead, but the Spaniards were about to spring a major surprise.

From four down with six holes to play, they won the 13th, 15th, 16th and 17th to get it back to all square – a remarkable comeback considering the position they found themselves in.

Though Spieth and Reed managed to stop the rot with a half at the last, that still meant they only earned half a point as opposed to what looked like a certain full one, and the Americans now lead by only one point overall instead of two.

It was a massive moral victory for Europe, and ensured they remain firmly within touching distance heading into the afternoon four-balls.