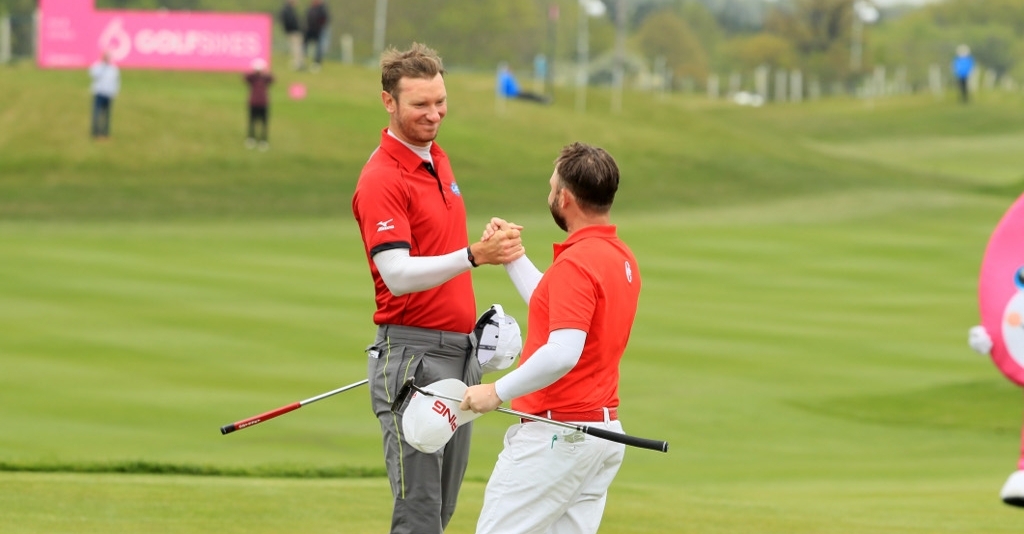 England ensured the opening day of the GolfSixes ended on a positive note for the home fans as they booked their place in the knockout stage.

The European Tour’s latest golfing experiment got under way on Saturday, complete with entrance music, pyrotechnics and a smattering of celebrities.

Sixteen teams of two battled out in four groups, using a greensomes format in a series of six-hole matches.

Home favourites Andy Sullivan and Chris Wood were in danger of missing out on Sunday’s knockout stage after two draws in their opening matches, but they rallied in their match against the Netherlands, birdying five of their six holes to claim a 4-0 win and top Group A, advancing alongside Denmark in second.

Great fun out there today @GolfSixes hope to see more of the same great support out there tomorrow pic.twitter.com/jkULNZiZPZ

“We went out, we knew we had to get a quick start,” said Sullivan. “We had to go out there and win the game. To come out of the locks the way we did with three birdies at the start is exactly the start we needed.

“Being the host nation, it’s obviously a lot of home support, which is fantastic for us. We feel like we’ve got the best of the atmosphere out of all the teams. Hopefully that can push us on tomorrow.”

In Group B, Thailand beat Scotland 3-1 to finish top, although the Scots also advanced thanks to Belgium’s 2-1 win over Spain.

Group C saw Australia and Portugal advance. The Portuguese duo Ricardo Gouveia and José-Filipe Lima finished top with two wins and were one of the surprise packages on the day.

The United States won their final match against Portugal but it wasn’t enough to avoid  an early exit.

“It feels great,” said Gouveia. “We played really good golf, really steady all the matches. The US played really well in the last match and didn’t give us much there. But really happy to go through to tomorrow.

“If we keep playing like this, it’s going to be hard to beat us. We’ve just got to keep playing well and just keep combining the game really well. That’s what we’ve been doing and let’s hope we get through to the semis tomorrow morning.”

Group D saw Italy and France progress at the expence of Sweden and South Africa.