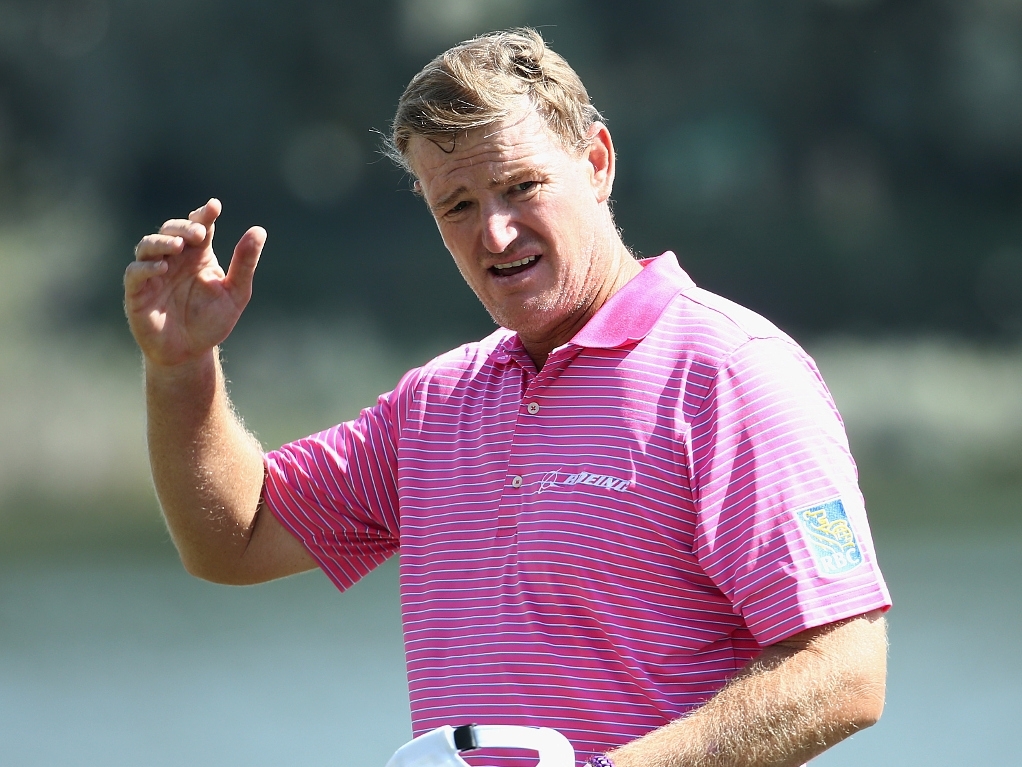 Just a month after questioning his future in the game, Ernie Els has moved into contention for a fourth victory in the Omega Dubai Desert Classic on Friday.

Defending champion Rory McIlroy, meanwhile, looked set to miss the cut after notching his fifth bogey of the day on the 11th, but four birdies in the remainder of his round helped the Ulsterman to a second round 72 and a share of 23rd place on four-under-par.

That left the world number two six shots behind 2012 champion and leader after 36 holes Rafael Cabrera-Bello, with Els one shot behind alongside fellow South African Trevor Fisher Jr. and England's Danny Willett.

Els missed the cut at the SA Open in January after suffering an attack of the "yips" during his first round – the 46-year-old's putt from 18 inches failed to make contact with the cup, never mind lipping out.

A four-time major winner, Els as struggled with similar problems on more than occasion last year, and with the ban on anchored putters coming into effect at the start of the year, 'The Big Easy' was unable to revert to his favoured 'belly putter'.

Nevertheless, the ever-popular Els, who has dropped down to 205th in the world rankings after two years without a win, was determined to set things right in Dubai this week.

After carding an opening round 68, he moved into a tie for second place at the Emirates Golf Club with a second round 67.

"I feel like I'm looking forward to the weekend. I'm not dreading the greens. That's where I've been for the last two or three years since I won the Open Championship," he told Sky Sports.

"I have been feeling better and better since the first week of the season, where it was pretty bad, because from 18 inches I was dodgy. To make the changes that I have made, drastic changes in the putting set-up, the grip and so forth, and now to be feeling very comfortable and confident is an about-turn, isn't it?

"It's an exact turnaround from a few weeks ago when I was dreading to get on the greens. I feel very different. I feel like I don't mind making a two-footer or a four-footer."

McIroy started day with bogey on opening hole and after three-putting on the fourth, he promptly threw his ball into the green-side lake.

A birdie on the fifth followed, but after more bogeys on the eighth, ninth and 11th, the 26-year-old found himself outside the cut mark. However, he was able to card a level par 72 after closing with birdies on the 13th, 16th, 17th and 18th.

"I did not have my best stuff with me and struggled at the start and in the middle of the round," McIlroy told Sky Sports. "I needed something, first and foremost just to be here for the weekend, and then to birdie the last three holes definitely gives me a little bit of momentum going into the weekend.

"I felt like I played some decent golf out there but missed some short putts. I just wasn't committing to the lines I was picking. All in all it was a decent finish and if I can get off to a better start [on Saturday] you never know.

"There's a lot of players between myself and the lead, but at the same time I've come back from bigger deficits than this, and this is one of my favourite places.

"The course got firm and fast and in a way I'm thankful that I'm not going to be out in one of the last pairings [on Saturday], because I feel like I'll get some of the better conditions and the course will be a little more receptive."