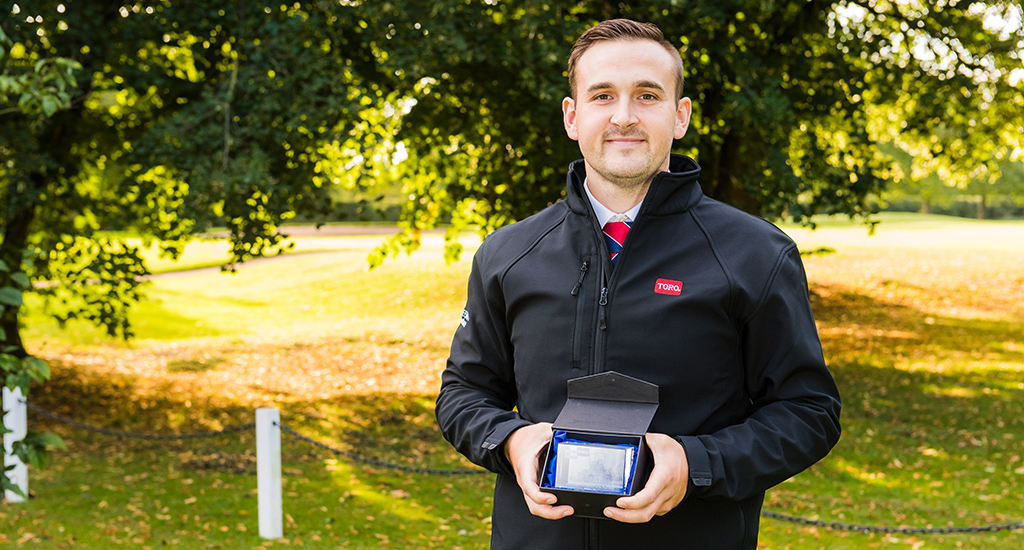 Oulton Hall greenkeeper James Dawson has enjoyed quite a month: he was runner-up in the prestigious Toro Student Greenkeeper of the Year Award 2019 and he became a father for the first time.

What’s more, the 30-year-old had to break off from his paternity leave at home in Garforth to participate in the two-day competition, as his wife, Kirsty, had just given birth to their first child, Rory. All in all, as he readily admitted, it was a whirlwind couple of weeks.

Dawson said: “My boss, Mark Dring, nominated me and I was successful in the regional interviews and was chosen to go to York for the final event over two days.

“I was anxious and nervous, particularly as Kirsty had only recently given birth and I had to leave her to attend the event. I’m getting more used to dealing and meeting people now, but, even so, it was quite daunting getting up and presenting in front of a room full of people.

“It was definitely the most nerve-racking thing I’ve done. However, I really enjoyed the experience. With the qualifications I’m taking there are no yardage markers along the way to tell you how well you’re doing, so it was personally very beneficial.”

He continued: “Kirsty’s doing amazingly well with Rory – she chose the name, it wasn’t influenced by a certain Irish golfer. I was lucky that I was able to add a week’s leave to the two weeks’ paternity leave in order to help her; although, I did have to leave her for a couple of days to attend the event.”

The York-raised Dawson has been with the Leeds resort for two years and is taking his level two greenkeeping qualifications at Myerscough College, in Lancashire. He’s ambitious, but his feet are firmly on the ground, and he knows there is still a long way to go to get to the top of his profession.

“I’ve still got a lot to learn,” he admitted. “Mark’s looking to get me on to level three and I can learn an awful lot from him, particularly with regard to the mechanical side of the operation. I really enjoy working with him and at Oulton Hall – and, as it’s just 10 minutes from home, I still get to help out with Rory.”

The Toro Student Greenkeeper of the Year Awards is a national contest hosted by the British & International Golf Greenkeepers Association (BIGGA) and sponsored by turfcare machinery manufacturer Toro, alongside its official UK distributor, Reesink Turfcare.

This year was its 31st outing, and saw a record number of nominations, meaning the finals were more keenly contested than before. Each year, a selection of the best student greenkeepers, garnered from regional interviews across the country, heads to BIGGA’s headquarters, in York, for the two-day final of the event, where they complete a variety of tasks designed to test their industry knowledge and their commitment to the profession.

Oulton Hall’s course manager, Mark Dring, added: “I was delighted to be able to nominate James and was not at all surprised to hear of his success. He’s very hard-working and professional and is always keen to learn. All I can say is that the guy who beat him must be something very special.”

Along with Oulton Hall’s renowned golf academy, the top venue offers a range of other facilities aimed at fine-tuning the swing, while the Claret Jug course restaurant is the ideal place to re-energise after a long day on the course. Its unique 18th-century former family mansion is the perfect choice for a hotel, with landscaped gardens, sweeping spiral staircases and a state-of-the-art spa.