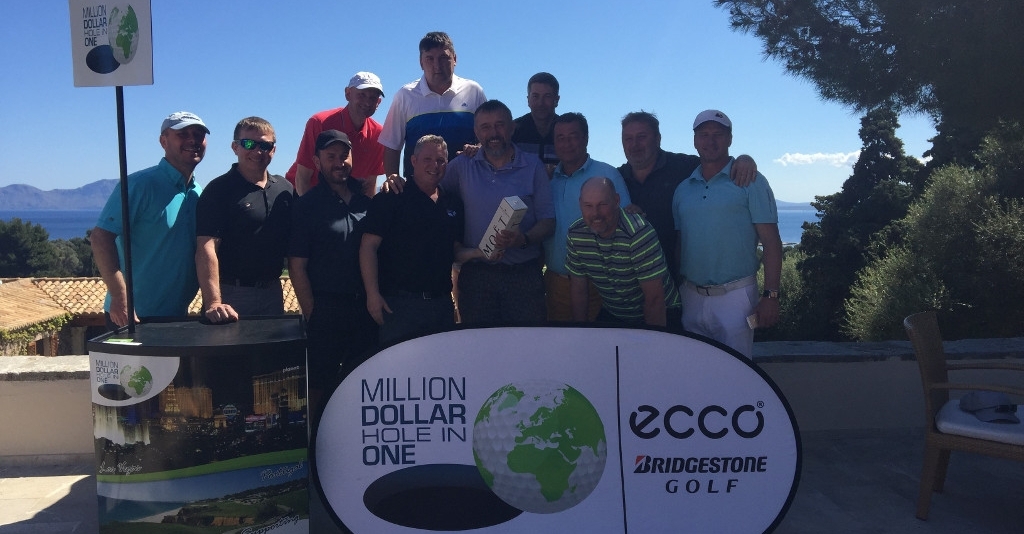 Million Dollar Hole in One (MDHIO) saw one of its customers net the first hole in one of the year after Mirolsav Sevcik achieved the feat at the prestigious Club de Golf Alcanada in Mallorca.

Sevcik, who is from the Czech Republic, bagged an ace on the 176-yard (160m) par-3 fourth hole, playing off the yellow tees at the island’s premier course on Wednesday, March 29, thanks to his trusty Callaway 7 iron.

The business manager, an 11 handicapper, paid €10 to enter the par-three hole-in-one challenge and his success will see him join other golfers who achieve an ace at one of MDHIO’s 40-plus associated courses across Spain and Portugal at the annual final where all winners shoot for $1million.

Sevcik, 48, who lives in Brno in the south east of the country, said: “It was an amazing shot to the left of the green, which then kicked right and rolled four or five metres into the hole. I was very happy to see it go in.”

The popular MDHIO competition attracts more than 50,000 competitors a year and anyone who manages a hole in one will get the chance to shoot for a $1m prize at an annual event to be held in Las Vegas, USA.

Andy O’Doherty, MDHIO’s general manager for Spain, said: “It was a wonderful shot but it’s not the first time a hole in one has been achieved at Alcanada in our competition.

“The season has only just begun and already we have a hole in one, so congratulations to him. I spoke to him, and he and all his friends were delighted, although he told me it is not his first time he has got one – apparently, it is a fairly regular occurrence.

“He was away on a golf tour last year and did it then as well, so it will certainly be interesting when he goes out to Las Vegas next year to shoot for $1million. We would be delighted if he achieved that feat, it would be absolutely blinding for him and MDHIO.”

Sitting in a breathtaking location overlooking the Bay of Alcudia and adjacent to the Mediterranean, Alcanada is the only course on the island next to the sea and is recognised by the golf industry as being one of the finest venues in Europe.

O’Doherty added: “We have worked with Club de Golf Alcanada since 2006. It really is a gorgeous course, it’s always in fantastic nick and the views are stunning as it is next to the sea.”

Kristoff Both, Club de Golf Alcanada director, added: “We have been working with MDHIO since 2006 and we think it is a great additional service to our clients.

“Of course, we know that playing a hole-in-one is like winning the lottery but still we think it is a nice add-on to our service. And the players who achieved a hole in one with MDHIO at our course will probably never forget the great experience.”

MDHIO, which has become part of the exciting new Million Dollar Holdings company, formed of established golf travel tour operators Leisure Link Holidays and Golf Amigos and has been running since 1990 in the USA and since 2000 in Europe.

The company is the brainchild of industry veterans led by entrepreneurs Martin Tyrrell, Kevin Stowe, Tracy Aslam, Doug Fisher, Jamie O’Doherty, Steve Ingle and Gordon Murray, who together boast more than 100,000 loyal golf customers between them.