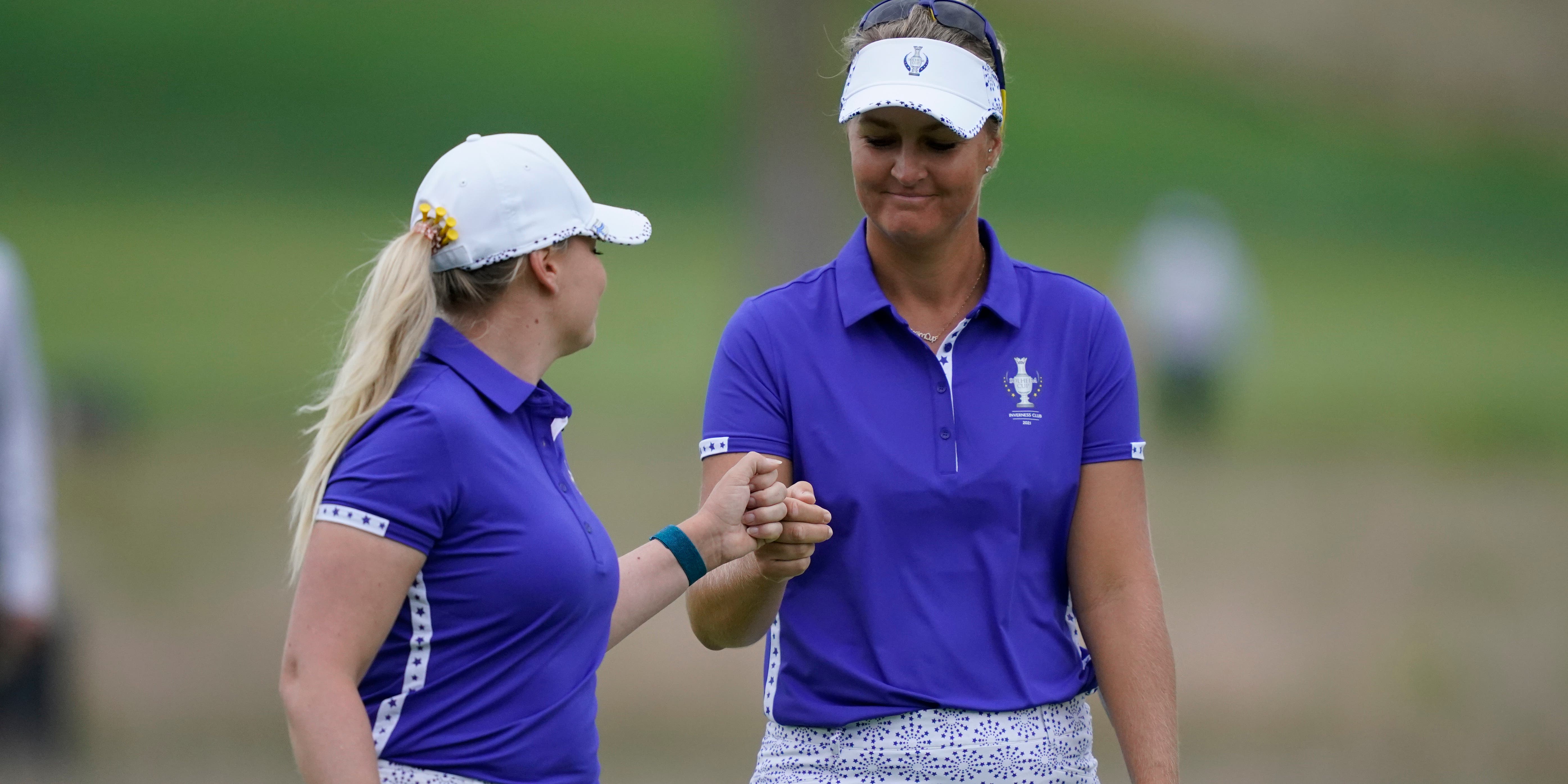 World number one Nelly Korda benefited from a controversial ruling as the United States looked to fight back from an early deficit in the 17th Solheim Cup.

Playing alongside Ally Ewing in the afternoon fourballs, Korda’s eagle putt on the 13th stopped on the edge of the hole, but her ball was swiftly picked up by Europe’s Madelene Sagstrom, conceding a birdie.

However, Sagstrom was deemed to have not waited long enough and Korda was credited with an eagle to win the hole and move one up.

Under Rule 13.3, if any part of the ball is overhanging the lip the player is allowed a “reasonable time” to reach the hole and then 10 seconds to see if the ball would drop.

Sagstrom, playing partner Nanna Koerstz Madsen and European captain Catriona Matthew argued that the ball was not going to drop in, but the ruling of the on-course official was confirmed.

Rules official Annie Giangrosso told Sky Sports: “When the European player picked up that ball, per the rules of golf, it was pretty cut and dried. That shot Nelly hit was actually holed.”

Asked if there was any doubt whether the ball was overhanging the hole, Giangrosso added: “It was pretty clear-cut. We have Joao Pinto, who is an LET official, in the TV booth and he right away was looking at it after the match referee called it in.

“It was a pretty quick, clear-cut decision that the ball was overhanging the hole.”

Korda and Ewing went on to complete a narrow victory on the 18th, by which time Anna Nordqvist and Matilda Castren had already beaten Lexi Thompson and Mina Harigae 4 and 3 to secure a second point of the day following a foursomes win over Danielle Kang and Austin Ernst on the 18th.

Mel Reid and Leona Maguire had also overcome the previously unbeaten star American pairing of Nelly and Jessica Korda as Europe claimed a three-point lead after the opening session.

The Korda sisters won 6 and 4 and 6 and 5 in the same format at Gleneagles in 2019, but looked nervous from the outset and gifted the European pair a two-hole lead with a bogey on the fourth and a double bogey on the sixth.

Jessica chipped in for birdie on the 13th to halve the deficit but Reid and Maguire, a rookie and the first Irish player to feature in the contest, held their nerve to see out a potentially significant win.

“I couldn’t have asked for a better start to my Solheim career,” Maguire said. “Very lucky to have Mel alongside me.

“I think everybody had written us off today, and we just sort of took that in our stride and wanted to be as relentless and fearless as possible, and I feel like we did that.”

Reid was quick to pay tribute to her playing partner, adding: “Honestly I could not be more impressed with this girl.

“We hadn’t really spoken before this week and I said, ‘listen, if you start booking practice rounds with me after this I’ve done my job’. She says, ‘maybe, maybe not’.

“This girl, honestly, she’s some player and I’m just really, really proud of the way she handled herself and she’s a very, very impressive girl, so it was an honour to play with her in the first match.”

The home side looked set for a win when Ewing and Megan Khang were two up with two to play against Georgia Hall and Celine Boutier, who were unbeaten at Gleneagles in 2019.

However, Hall holed from 15 feet for birdie to win the 17th and a par was good enough on the last to snatch half a point, Ewing failing to hit the hole from three feet with a putt to win the match.

And there was even more good news in the final match as Charley Hull and Emily Kristine Pedersen recovered from two down with four to play to beat Thompson and Brittany Altomare on the last.

Hull and Pedersen combined to birdie the 15th, 16th and 18th, with Pedersen holding her nerve to hole the winning putt from five feet after a superb approach from Hull.

European fans are thin on the ground in Toledo due to coronavirus travel restrictions but Hull said: “I like that. I actually like being, not cheered against, but hearing the ‘USA’ ones because it makes you want to win more.”