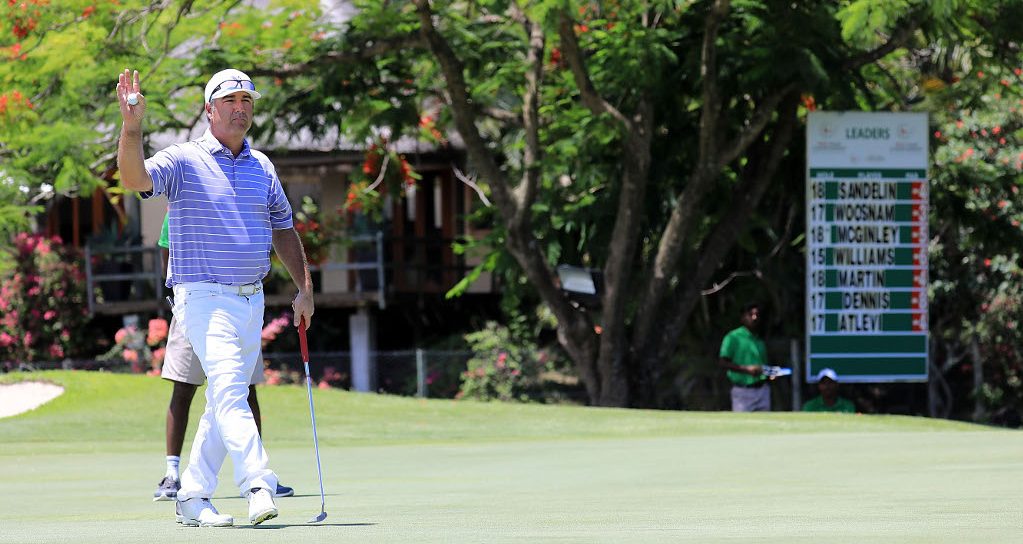 At the end of round one Clark Dennis had few worries about his caddie. Son Philip had carried the bag in round one of the 2017 Swiss Seniors Open. The result? A 63 and a share of the lead.

The duo combined for the same number in round one of the MCB Tour Championship – Mauritius and this time it earned them the outright advantage by no less than four shots.

All was good with the union until they arrived at the course on Saturday morning.

“Yeah,” laughed dad after his second round. “Unfortunately he left the clubs in the room. He had to go back and get them so I didn’t get much practise! The good news is the hotel is across the road and after that he did a great job again.”

A Saturday 6-under-par 66 failed to keep pace with the combination’s career stroke average, but it leaves Dennis on 15-under 129 heading into the final round, three shots clear of second placed Magnus P Atlevi, whose made a 65 alongside the leader, and four clear of Phillip Price who shot 66 for 11-under. Paul McGinley is alone in fourth, but six strokes back of the lead.

Just former world number one and Masters champion @IWoosnam teeing off behind them. But this gallery got other things on their minds. pic.twitter.com/pcHXNlBlvB

Dennis has steered a clinical path through the trees, volcanic rock and water hazards of the Legends Course at Constance Belle Mare Plage through 36 holes. He is yet to make even one bogey and made all six of his Saturday birdies by the 11th hole.

Even during that stretch he missed two golden opportunities for birdie, and he would do so again afterwards, most notably when a four foot putt slipped by the hole on the 18th green, but he also displayed a cool touch around the greens, scrambling for par from the tricky Bermuda and Paspalum grass on nine and 15.

“I can’t complain,” he said. “Any time you get around the course without making bogey is a good one, but it really could have been a special day.”

Playing partner Atlevi also got off to a fast start, making six birdies by the 10th green. He would add two more, but found trees off the 16th tee for his only dropped shot of the week.

Atlevi taps in for birdie to finish on 12 under par, three strokes behind Dennis heading into the final round #MCBTourChamp pic.twitter.com/LoKglHFcvD

“Seeing Magnus go low, I thought, ‘Okay if he’s going low, I’ve gotta go low too,’” explained Dennis. “Fortunately I was able to match him pretty much most of the day.

“I’m looking forward to tomorrow. I feel good and the way I’m striking it, if I can hole some putts, I think I’ve got a good chance, but I know I have to keep making birdies.”

For the 52-year-old this position is far from new territory, but he will be mindful of complacency. Twice he has taken a three-shot lead into the final round of a Staysure Tour event and on both occasions he failed to convert the win.

But they were also his first experiences of sleeping on an advantage at this level. Since then he has had another four solo or shared leads, winning twice, finishing second in the other two instances.

Fifth in this tournament 12 months ago, the American has the chance to not only improve on that, but claim a fourth Staysure Tour win in just his 24th start.