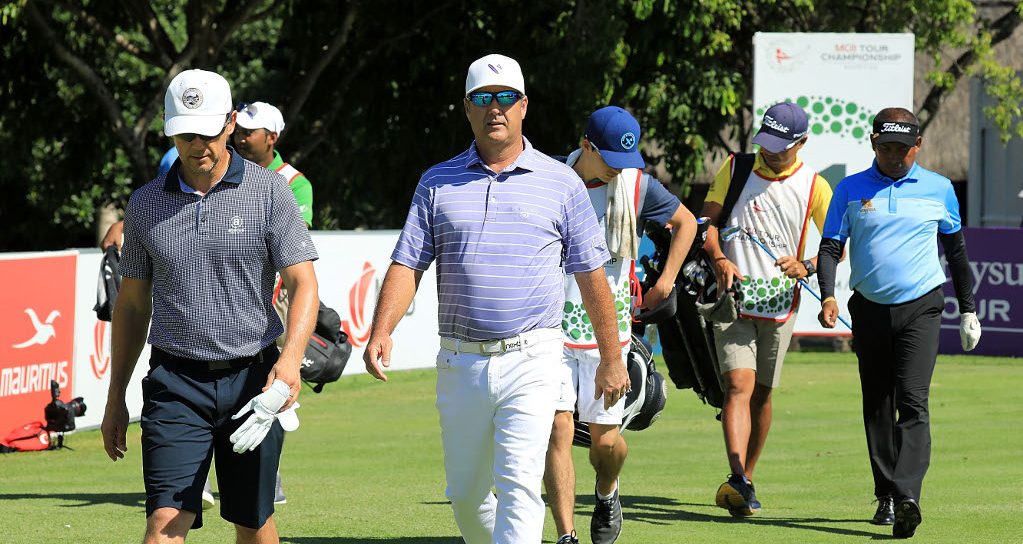 To participate in the Staysure Tour’s season-ending Indian Open Swing, Texas-resident Clark Dennis (plus his wife and son) flew halfway round the world and he admitted that as the final leg of the journey neared its conclusion, after completing 20,000 kilometres and crossing 12 time zones, he pondered if it had all been worth the effort after a long season.

“Then we arrived, looked at each other, and said: ‘Oh yeah, it was worth it.’”

After opening the MCB Tour Championship – Mauritius with a stunning round of 9-under-par 63 the American, still a little jetlagged, will be even more content with this final long haul of 2018.

He heads into the weekend holding a four-shot advantage over the field, eyeing a fourth victory in just the 24th start of his Staysure Tour career and the family fortnight in paradise has only just started: next week the Swing moves north to the Seychelles.

“It was one of those days where everything went right,” admitted Dennis after thrashing seven birdies and one eagle. “It’s not often you chip in twice during a round, one for an eagle, the other for par.

“It’s a funny game. My game didn’t feel great coming into this week. I just didn’t feel good physically so you never know.

“My eldest son Will sent me a video of me from four or five years ago and said: ‘Just watch it Dad’. I noticed a little change in my posture and it just made so much difference.

“You can’t rest, you have to keep making birdies out there. Thaworn (Wiratchant, the defending champion) finished 1-under today but he could easily go 18 under over the next two days.”

It is no surprise that Dennis is cautious of Wiratchant. On the one hand he knows the Thai golfer secured last year’s title with a sensational 10-under 62. On the other, they played together in round so he was witness to the three birdies in the first four holes with which the 51-year-old launched his defence.

At that stage Dennis trailed him by two, but the 554-yard par-5 fifth hole on the Legends Course at Constance Belle Mare Plage proved a turning point. Wiratchant’s tee shot found trouble as he racked up a double bogey-7 whilst Dennis secured a birdie.

In the short-term it was a three-shot swing, in the long term it was a momentum shift. Dennis never looked back; Wiratchant failed to make any further ground, swapping a pair of birdies with a brace of bogeys as he shot 1-under 71.

For the first time in the Tour's history, players are permitted to wear shorts during tournament rounds #MCBTourChamp pic.twitter.com/M10YosyEGr

2012 European Ryder Cup captain McGinley has eight top 20s from the first ten starts of his Staysure Tour career, but he is yet to find the win and is keen to avoid complacency through the final 36 holes.

“The key to playing golf on this Tour is having a fast start,” he said. “You have to be on it early because the standard is so good. At least now I’m on the pace, but I still have to do better than this over the next two rounds.”

How things stand after the first round of the #MCBTourChamp pic.twitter.com/sRvf28yMa0