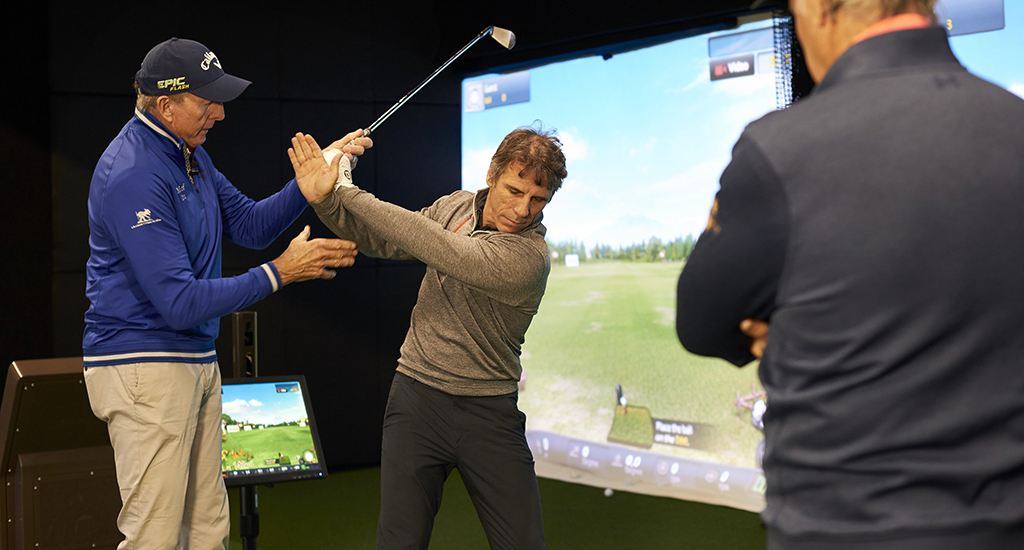 As a footballer, Gianfranco Zola’s remarkable skill and ability seemed to come naturally as it made him one of the stand-out players in the Premier League era. But he is now a committed convert on the use of technical data to enhance sporting performance.

A glittering career with Napoli, Parma and Chelsea saw the diminutive forward earn 35 caps for Italy and play in the 1994 World Cup and Euro 96 for his country. After his retirement in 2005, he has since embarked on a coaching career with stints at West Ham, Watford and Birmingham City and is now waiting for his next challenge after leaving his role in the summer as assistant manager at Chelsea.

But as he waits for his next challenge in football, it has given the five-handicapper a little extra time to work on his golf. Zola is still based in the UK and was keen to see the new facilities at the Leadbetter Academy’s European HQ at Stoke Park.

And after attending the launch of the GOLFZON simulators and gaining some first-hand expert instruction from the legendary golf coach, Zola is well aware of the benefits of the instant data from the state-of-the-art simulators.

Each of the high-definition simulators comprises two high-speed cameras, equipped with the proprietary T2 sensor, which accurately traces club movement and impact of all shots with fast processing of high-precision data. Additionally, GOLFZON’s moving Swing Plate – a high-tech tee mat – automatically adjusts to uphill, downhill, and side-hill lies, by simulating course slopes from the tee box to the putting green.

Zola said: “I think the GOLFZON simulators within the Leadbetter Academy are fantastic. You have that instant data in front of you which can only help you improve, especially when you have the best coach in David telling you what you should be doing.

“As a footballer in my career, that sort of data was just not available. You just had to trust what the manager was telling you. But since becoming a coach and a manager myself, the data is vital these days.

“Sometimes they argue with me saying ‘I already do that’. But when you can show them exactly what you mean with video and the technical analysis, it helps!”

Leadbetter, alongside world-renowned biomechanist JJ Rivet, also underlined some of the shared methods between football and golf in generating power during the lesson, with Leadbetter even taking on the impromptu role of a goalkeeper to make his point about the importance of posture and balance.

It was an unusual switch for Zola to be looking for something straighter with his driver, in contrast to the fierce bend of a trademark free-kick, but it provided some fascinating insight on the similarities between the sports.

Zola said: “I love my golf. It is a more technical sport than football but you still need that little bit of imagination and creativity sometimes and there are some similarities I hadn’t thought about before. But it was incredible to understand a little bit of David’s knowledge – I definitely have some things to work on with my game!”

Click here to view a time-lapse video of a GOLFZON simulator room being converted for use in just 72 hours.