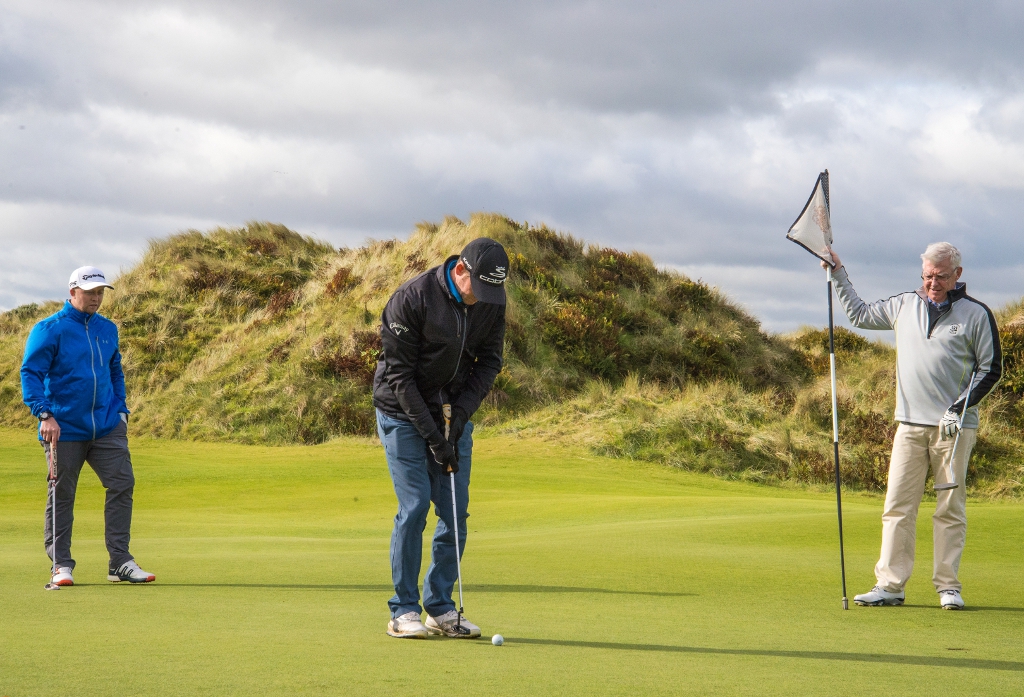 And the prizes are worth winning too, with the best 16 eclectic cards over a six-month period earning the golfer a place in a two-day grand final at the stunning Castle Stuart, in the Scottish Highlands, where they will enjoy two rounds of competition golf and two nights’ complimentary accommodation courtesy of Macdonald Hotels & Resorts.

All money raised via the competition – and its various associated events – will be donated to Prostate Cancer UK as the charity fights back against a disease that kills one man every 45 minutes.

HowDidiDo is Europe’s largest online golfing community, with more than half-a-million club golfers, from 1,800-plus registered clubs across the UK and Ireland, using the website regularly.

After signing up with a minimum £5 donation, golfers – who will receive the iconic Prostate Cancer UK Man of Men logo alongside their name on the website – simply log their scores with HowDidiDo in the normal fashion, with their best ‘eclectic’ round, between April and September 30, calculated automatically by the HowDidiDo system.

“Prostate Cancer UK resonates with us at HowDidiDo because it largely affects men over the age of 50 – and our average golfer is a 51-year-old man. So there’s a great deal of synergy between a golf community like ours and the charity and we’re hoping to get 5-6,000 members signing up.

“In addition to the place at the grand final – where competitors will receive a full apparel makeover courtesy of Peter Millar – and the knowledge you are helping to save lives, there are also some excellent individual prizes to be won.”

In the UK, one in eight men will get prostate cancer at some point in their lives. Older men, men with a family history of prostate cancer and black men are more at risk – and, for the latter, the statistics are even starker: one in four.

James Beeby, director of fundraising for Prostate Cancer UK, said: “Our partnership with HowDidiDo continues to go from strength to strength and these early figures are really encouraging.

“Golf is a hugely important demographic for us given the average age of men who play. We know prostate cancer is a disease that is prominent at every golf club and have raised a substantial amount of money and awareness across several years to combat that.

“We’re really pleased that golfers are utilising a product that can not only improve their game, but play a part in saving lives as well.”

HowDidiDo holds data from in excess of 53 million rounds of golf, along with the handicaps, results and scores of more than 1,300,000 UK golf club members. More than 547,000 golfers currently use the website, while in excess of 1,800 golf clubs currently use the HowDidiDo system – courtesy of their use of Club Systems International software. HowDidiDo allows members to analyse their game and compare performance with other players, at their own club or across the entire HowDidiDo network.

HowDidiDo is rapidly becoming the largest online, social golfing hub in the world, with new, engaging and exciting content for golfers everywhere to enjoy. It is also used for official CONGU handicapping and competition results.

As well as developing one of the most active sports websites in the world, HowDidiDo also powers the annual Titleist Order of Merit, the largest golf event of its kind in the country, which sees more than 20,000 golfers take part each year, making it one of the UK’s most subscribed sporting competitions, behind only events like the London Marathon and Great North Run.