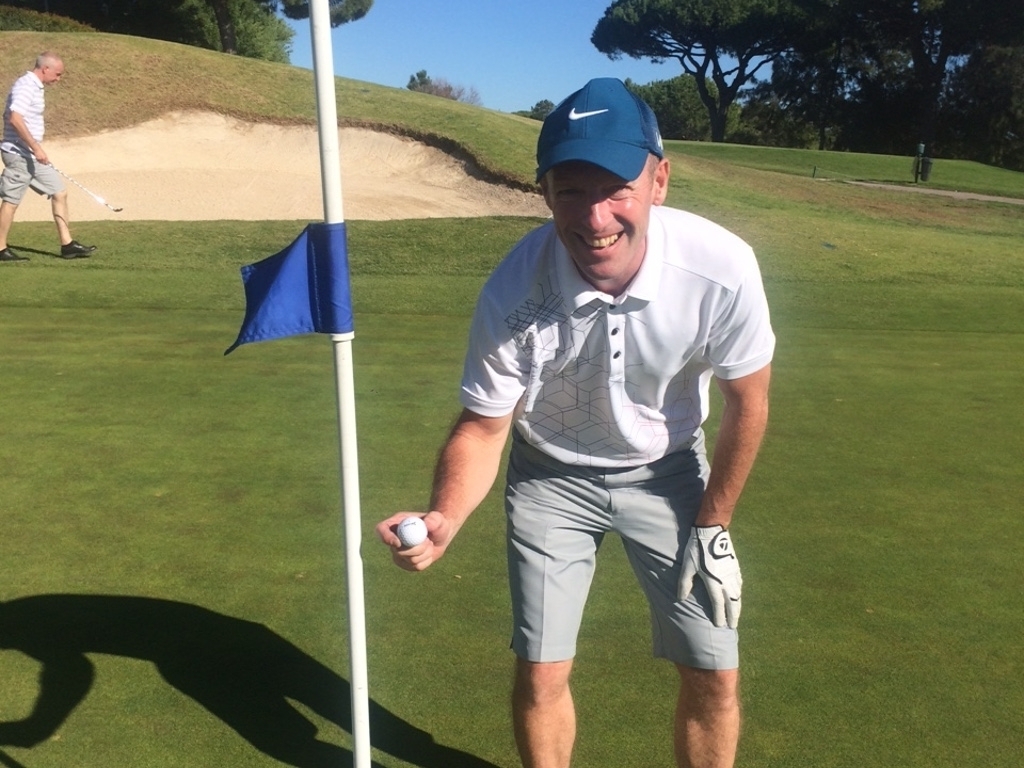 Carlisle golfer Mike Kelly put 11 years of frustration behind him to bag his first ace and join his son in the exclusive ‘hole-in-one-club’ after playing the popular Million Dollar Hole in One (MDHIO) competition in Portugal.

Kelly, 51, who plays off a seven handicap at Carlisle Golf Club, made his mark at Vale do Lobo’s Royal Course, in the Algarve – one of MDHIO’s 40 associated courses across Europe – to book his place in the grand final where competitors get the chance to shoot for a whopping $1m.

The MDHIO par-three challenge allows competitors to win a selection of golf-related prizes, from balls to pitch-mark repairers, for landing on the green. If a competitor gets a hole-in-one they win an expenses-paid trip to the USA to play for a $1m prize if they can repeat the feat. And, from 2019, the winner also gets the choice of a trip to either the USA or Europe.

Kelly, a retired police officer who is now a British Red Cross volunteer coordinator, said: “My son Adam is 23 and had a hole-in-one when he was 12, so it’s always been a goal of mine to match him. When I messaged him from Portugal, to tell him I had done it, he simply replied ‘welcome to the hole-in-one club’.

“When Adam struck his hole-in-one, I was immensely proud but also very envious having never done it myself. It has taken a long time. I have been playing golf for 40 years, so it is fantastic to have finally done it. I was delighted.

“We are a competitive family. Over the years we’ve competed in our own Kelly Challenge competition, involving brothers and cousins – but not another hole-in-one from any of us. Adam would often remind us of that …”

Kelly was among a group of 24 golfers on the trip to play Vale do Lobo’s two courses when he paid just €10 to enter the MDHIO game. His feat took place on the temporarily shortened 105-yard seventh hole on the Royal Course.

He added: “I hit it as sweet as I could; it landed six feet past the hole and slowly spun back. We all watched it go in and jumped for joy. It did cost a few bob as I was part of a large group, so there was a hefty bar bill.

“It was a great weekend, though. I have played MDHIO twice before. It is great fun and €10 well spent. You can also win prizes for landing on the green and I previously won a pair of sunglasses and a towel. I’m so pleased I paid my €10 … I mean why would you not? Imagine if you hadn’t paid and you holed it!

“I’m now looking forward to the finals event in Las Vegas; yes, there’s a chance to win $1m, but let’s be realistic, it’s taken me 40 years to get my first hole-in-one,” he smiled.

MDHIO, which has been running since 1990 in the USA and since 2000 in Europe, has steadily grown in popularity over the years with more than 50,000 people each year trying their luck at the various par-three holes at courses across Portugal, mainland Spain, Mallorca and the UK.

Almost 50 golfers have achieved their ace while playing MDHIO in Europe, while more than twice that number missed out by not entering and acing the hole.

The annual final is held at a host of top venues in the USA and Europe, where finalists enjoy an all-expenses-paid trip and the chance to shoot for $1m, with this year’s showdown held at the prestigious Golf & Spa Resort Grand Tirolia Kitzbühel, in Austria, which was attended by former England and Newcastle United football ace Alan Shearer.

MDHIO also offered golfers another chance to scoop $1m this year, after teaming up with American Golf. The retailer ran a simulator challenge at participating stores across the country with anyone who netted an ace – or the 10 nearest to the pin – going through to a final shootout at the Belfry.

MDHIO is part of Million Dollar Holdings, which recently formed an insurance company specifically for golfers called Golf Insurance 4U, offering a range of extensive policies for both adults and juniors – including hole-in-one cover, to guard against big bar bills like Kelly’s.