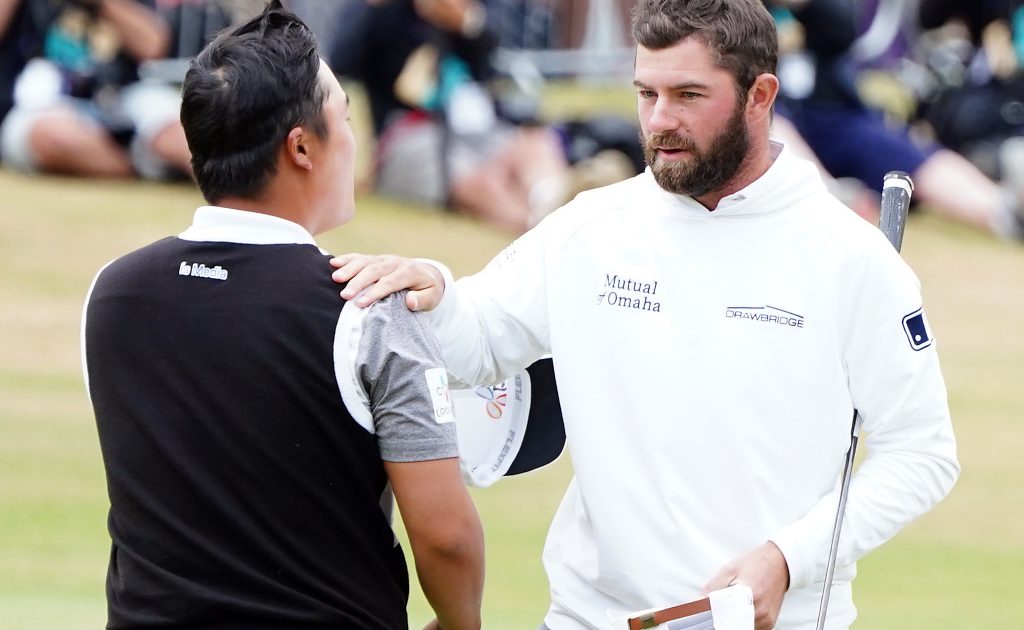 American Cameron Young set an imposing clubhouse target on day one of the 150th Open Championship as Rory McIlroy’s delayed return to St Andrews proved well worth the wait.

Making his tournament debut and playing just the sixth major of his career, Young carded eight birdies in a flawless 64, a score only McIlroy has beaten in the opening round of an Open on the Old Course.

McIlroy’s 63 came back in 2010 and was followed by an 80 in terrible weather, while an ankle injury suffered playing football prevented him from defending his Open title at the same venue in 2015.

The four-time major winner admitted this week therefore felt like the title defence he never had and he got off to a brilliant start, holing from 55 feet for birdie on the first and making seven in total in his 66.

In stark contrast, 15-time major winner Tiger Woods had covered his first three holes in three over, making a double bogey on the first after hitting his approach – from a fairway divot – into the Swilcan Burn short of the green.

“I played well, very solid,” McIlroy said. “Everyone knows you have to make your score going out and I did that.

“Started off tremendously with a bonus on the first, birdied the par five (fifth), a couple of the short par fours and then on the back nine you pick off a couple on the 14th and 18th.

“I birdied the holes I should have and only made one mistake and the way this course is playing it’s all about limiting your mistakes.

“I’m driving the ball well, once I put myself in the fairway I’m giving myself chances because my irons a little bit better; I’m putting well, seeing shots well and thinking well and I think that’s the most important part this week.”

Young had missed the cut in his last two starts, but the world number 32 has recorded four top-three finishes on the PGA Tour this season and missed out on a play-off for the US PGA Championship by a single shot.

And the 25-year-old revealed this was not his first experience of playing the Old Course thanks to a family trip 12 years ago.

“I came with my parents in 2010 so I would have been 13,” Young said. “I think we played eight or nine golf courses in six days. We played here, the New, the Old. We played Kingsbarns, Carnoustie, Gullane, Crail; I’m probably missing one or two.

“On that trip, the first time I got to be out here, my dad, I think, asked for permission to play from the back tees. I think that’s something you have to do, if I remember correctly.

“So when we came out to hit our first tee shots with the R&A building right there, there were a bunch of R&A members presumably watching. And I’m glad I didn’t know, I’m sure I would have been nervous out of my mind.

“But I think there’s a picture of me hitting there with a bunch of those guys watching. That’s really my first memory of here.”

On a day when the early starters took advantage of benign conditions, Australia’s Cameron Smith carded a 67 while amateur Barclay Brown returned a superb 68 which was matched by veteran Lee Westwood.

Westwood’s fellow LIV Golf rebel Ian Poulter had been booed by a handful of spectators on the first tee due to his involvement in the Saudi-backed breakaway series, but turned the jeers to cheers after holing from 150 feet for an eagle on the ninth in his 69.

There was disappointment for his Ryder Cup team-mate Justin Rose, as he was forced to pull out with a back injury just before his scheduled 8.14am tee time.

The 41-year-old had ended Wednesday’s practice round prematurely, leading to speculation he may have sustained a problem, with Japan’s Rikuya Hoshino taking his place alongside the Ryder Cup dream team pairing of Tommy Fleetwood and Francesco Molinari, the 2018 Open champion.

First reserve had been Alex Noren but he chose to go to the Barracuda Championship in California, which starts later on Thursday.

“On the 4th hole yesterday during my practice round, I made a swing with my driver and started to feel pain in my lower back,” Rose wrote on Twitter.

“I’ve been getting around the clock treatment but it just doesn’t feel ready to compete in this prestigious championship.”