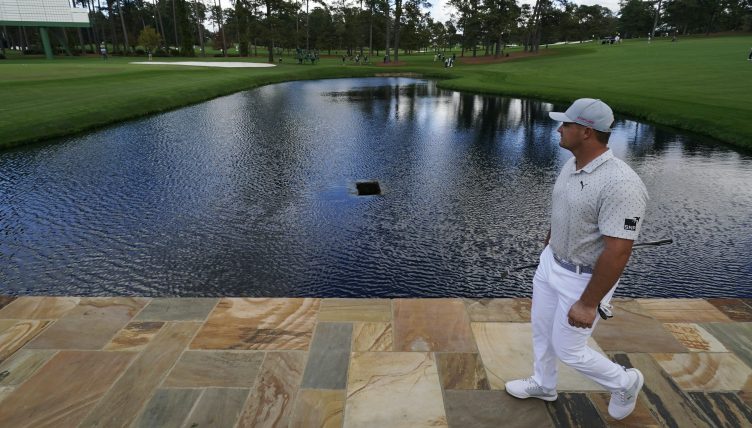 Bryson DeChambeau is wary of his tag as Masters favourite but believes his unique approach to the game is finally being embraced.

A self-styled “golfing scientist”, DeChambeau’s methods have been raising eyebrows long before he powered to a six-shot victory in the US Open at Winged Foot in September to claim his first major title.

The 27-year-old American was still in high school when he told his father he thought he could “change the game of golf”, a daunting task he set about by choosing a variation on The Golfing Machine – a book by Homer Kelley – which allowed him to swing on a single plane.

That required adapting his irons so they were all the same length, around that of a six iron, while he also took to floating his golf balls in Epsom salts to check if they are perfectly round.

Such attention to detail paid off to the extent that in 2015 DeChambeau joined Jack Nicklaus, Phil Mickelson, Tiger Woods and Ryan Moore in winning the NCAA and US Amateur titles in the same season, but it was his decision to “bulk up” to gain extra distance which has dominated the headlines this year.

DeChambeau fuelled the fire when he recently recorded an extraordinary drive which flew 403.1 yards in the air, despite not using the 48-inch driver, the longest permitted, which he is testing and could use at Augusta National.

Even without that club DeChambeau has already driven over the green on the 350-yard par-four third hole and the longest club he had into any hole during practice was a six iron to the uphill, par-five eighth.

Asked if he felt his approach was being embraced more after his US Open win, DeChambeau said: “I do think that is a fact. I think people are starting to see that no matter what I do, it’s always to try to get better.

“I think that’s what hopefully can inspire a lot of people to say, you know what, I’ve got to think about this hopefully in a new way and try and be as good as I possibly can to do my best each and every day, and if something fails and something is wrong, I pull myself back out and I try something else.

“I hope people have understood, and I think people are starting to understand that after that win.”

DeChambeau admits he does not know where the “end game” is in terms of his distance gains, but concedes that length is far from the only factor in his chances of claiming back-to-back major titles.

His best result in three Masters appearances remains a tie for 21st in 2016 while still an amateur, although he shared the lead after an opening 66 last year before fading to 29th.

“I can hit it as far as I want to, but it comes down to putting and chipping out here,” admitted the world number six.

“That is one of the things that I think people sometimes struggle to see. As much as I can gain an advantage off the tee, I still have to putt it well and chip it well and wedge it well and even iron play it well, and that’s what I did at the US Open.”

DeChambeau concedes that the absence of detailed green-reading books, which are not allowed at the Masters, makes his task harder this week, as does the strength in depth at the top of the game.

That being said, DeChambeau has been the focus of attention ahead of a Masters in which 15-time major winner Woods is the defending champion and he added: “I don’t know about that yet. I’m not sure if I like it or not.

“I will say that I’m trying to look at it as I’m still an underdog to the field. Anybody can win this week. There’s a lot of unbelievable players out there.

“I will never look at myself as someone that is better than anyone out here until the scores are written in stone afterwards. It’s just not what I do, it’s not what I will ever do.

“The attention that I’ve gained has been awesome. I love it. I think it’s fun. But I’ve got to set myself back and again, anybody can win this week. I have to keep normalizing to that because that’s what I know is fact.

“I’m going to give it my all. If I don’t play well, I miss the cut, I’m still going to be gracious and walk off and go, you know what, I’ve still had a great year and I’m going to try and come back better next year.”