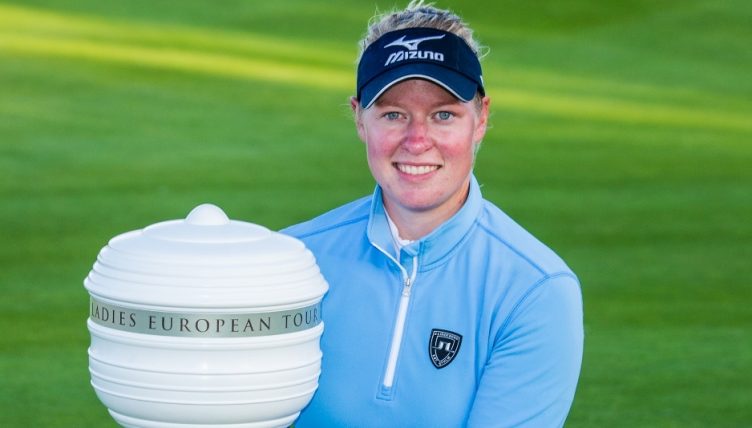 Four in front overnight, the second year LET player closed with a two over par 75 in tough and windy conditions to end 12 under and one stroke clear of South African Ashleigh Simon, with fellow Dane Malene Jorgensen a shot further behind in third.

After three birdies in her first six holes, Broch Larsen held a commanding seven stroke lead, but the back nine was full of drama.

Her advantage began to slip from the 10th, where there was a two stroke swing and she bogeyed while Simon birdied, but the powerful Dane recovered by making a long birdie putt on the 11th green.

Simon responded by picking up a shot at the 12th, but it was the par-4 13th where Broch Larsen opened the door with a double bogey after driving her ball right into water. She three putted the 17th and was only two strokes clear with a hole to play.

On 18, Simon nearly holed her bunker shot for birdie but a tap-in bogey from Broch Larsen was just enough to seal the first prize of 37,500 euros and a wire to wire victory.

“It was close. I got very nervous in the end,” said the 22-year-old from Hillerød. “I played well at the start but the double bogey set me back. On the last four or five holes I was very nervous because I didn’t get into the flow today.”

The win made up for the heartbreak of narrowly missing out on victory in Pilsen three weeks ago and Broch Larsen added: “This win couldn’t come at a better place, here in Sweden with a lot of guys from home and after my second place in the Czech Republic, it’s just amazing.”

She has now earned a place in next week’s Evian Championship, which is the final Major of the year.

Simon’s 72, in winds gusting 35 miles per hour, was impressive and she said:  “It was really tough out there today. I just ground it out, was really happy to shoot under par. The last few holes were particularly tough, playing really long. I hit two 3-woods and my short game, I hit some really good chips coming down the last few holes to save me so I’m happy with the score.

“I knew I had to stay patient. I had done this before and I knew there were tough holes coming in. I just barely lipped out for birdie on my 17th and then I thought maybe the one on 18 would keep rolling in but it wasn’t meant to be and Nicole played really good the last three days.”

There was even more reason for the Danes to celebrate with two representatives on the podium and Jorgensen was equally delighted with her 71. She said: “I’m very happy with the way I played, especially after my first round 74, because I didn’t think I’d be here. I’m really good friends with Nicole and we travel a lot together so I’m really pleased for her.”