A Hansen Effort to win One Million Dollars 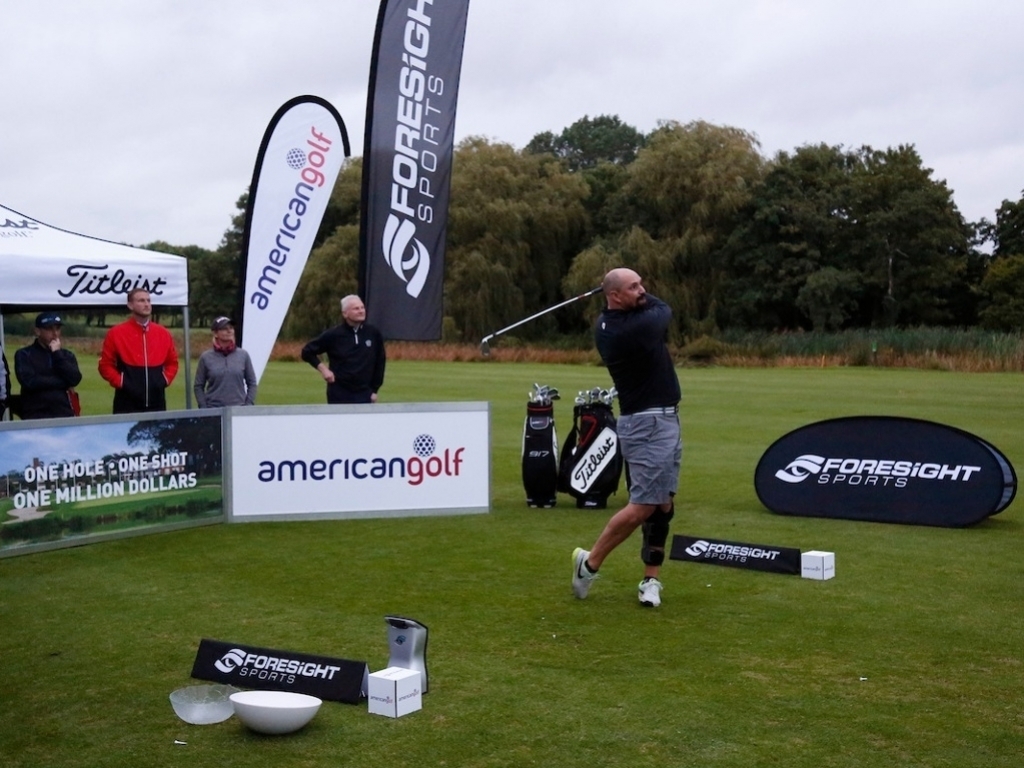 Former soldier Rob Hansen was just six feet away from winning On Course Foundation (OCF) a whopping $1million after taking part in last week’s Million Dollar Hole in One (MDHIO), in partnership with American Golf.

The thrilling shootout last Thursday at a specially-designed par-three 18th hole at the world-famous Belfry’s Brabazon course attracted a crowd of more than 200 during the American Golf Industry Day.

Hansen’s feat followed on from eight contestants who had booked a place in the MDHIO final after taking part in the qualifiers at American Golf stores across the UK, as well as nine lucky golf industry contenders drawn from a hat.

Qualifiers Chris Gilbert, 32, Mick Barnes, 48, from Stoke, Steve Rowe, 60, from Epping, Richard Hannam, 70, from Prudhoe, Jonathan McKee, 39, from Buckley, near Chester, Billy Turner, 26, from West Malling, Chris Johns, 31, from Dunblane, Ewan Morrison, 48, from Langworth near Lincoln and Georgina Wrixon, 18, from Horton near Wimborne all tried their luck at landing the huge jackpot without success.

Hannam, Barnes and Turner all landed on the green on the makeshift 150-yard hole, but it was Gloucestershire-based Hansen who came nearest to scooping $1million for OCF, a charity that supports the recovery of wounded, injured and sick service personnel and veterans through golf.

Former soldier Hansen, 41, who also plays off six, said: “I was a bit nervous stepping up to the tee as there was a large group stood up on the green and another 50 behind the tee. I have never had a hole-in-one – the closest I came was about five inches away but I was very happy with my effort on the MDHIO.

“It’s a shame I didn’t win the money for the OCF charity. I gave it a go, although my missus won’t believe I got this close so I had to take a photo of it – that should convince her.

“I’ve had a wonderful time, though. We are playing the OCF Championships as well, so with this it has been a fantastic couple of days. Any day on a golf course is a better than a day in the office.”

Hansen served for 20 years in Royal Signals until 2015 and suffered a catastrophic failure of his knee in June 2012, which resulted in medical discharge from service.

MDHIO director Martin Tyrrell added: “It was a brilliant event and a lot of thanks must go to American Golf, who organised so many fantastic events at the wonderful Belfry.

“Sadly no one won the $1million but they had an enjoyable day and enjoyed a lovely dinner and a stay at the resort’s hotel. Hopefully this is something we can do on a regular basis and hopefully next time we will see someone win the $1million.”

MDHIO is also running a parallel competition to win another $1million with this year’s final at the stunning mountain setting of the Golf & Spa Grand Tirolia Kitzbühel, Austria, which takes place today (September 12).