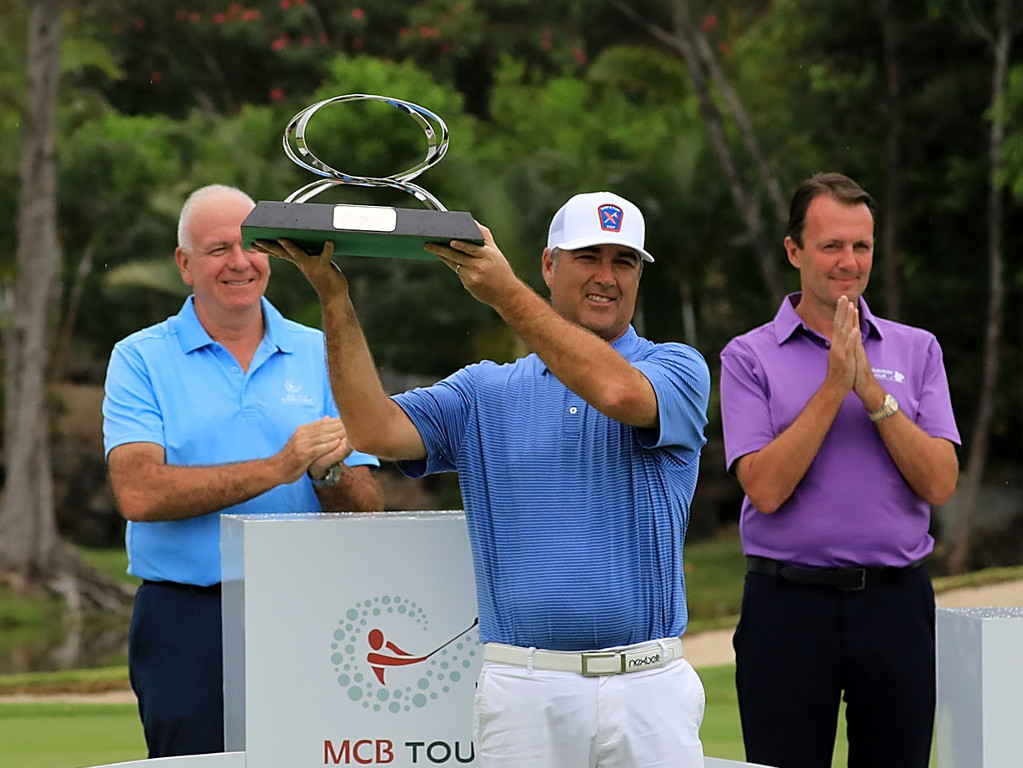 Dennis claimed the most significant title of his senior career with a stunning eight-shot victory in the Staysure Tour’s MCB Tour Championship – Mauritius on the Legends Course at Constance Belle Mare Plage and immediately heralded the vital input of two of his sons.

The 52-year-old’s dominance this week was in total contrast to his form leading into the event.

Whilst it was true that he had finished second in his previous two starts on the Staysure Tour, the last of them in early September, he had returned home to the States and failed to finish better than T40th in three Champions Tour starts before struggling at the same circuit’s Qualifying School.

“I was not hitting the ball well at all,” he admitted after a final round 8-under-par 64 completed a 23-under 193 total which equalled the tournament record low which Thaworn Wiratchant set 12 months ago.

“My eldest son Will sent me a video of a lesson I had with Dan Whittaker, an English pro, three or four years ago. It prompted a little change in my posture, just a minor thing, but what a difference. I was totally in control of my game this week and that is just so weird after what went before.”

Dennis went bogey-free through the 54 holes and laughed when he thought of how Will, back home in the States, would have learned of the success of his advice.

“He probably didn’t go to sleep. He’d have been watching the leaderboard and Twitter throughout the night.

“He’s a good golfer, plus four, and a real student of the game. He’s my biggest fan and he just wants me to do well so badly. Anything he can do to help, he’ll do it.”

What Will couldn’t do was carry his dad’s bag this week. Instead that honour went to youngest son Philip and the 18-year-old did a fantastic job.

“He was quiet, he said what he needed to and we just had fun out there. I’m just not sure what the caddie rate will be this week though. That’s yet to be determined!”

Philip had carried the bag just the once in the past, for a 7-under 63 in Switzerland. That means the duo has now played 72 holes in an astonishing 30-under-par.

Dennis with a birdie at the seventh and here at the eighth to move to 19 under par. He's now three ahead of Atlevi #MCBTourChamp pic.twitter.com/Jo4O9SMQ2J

Magnus P Atlevi forced Dennis to work had for the win despite the eventual winning margin. He was only two adrift of the lead with five holes to play before he made two late bogeys as Dennis closed with a hat-trick of birdies. The Swede ended the week on 15-under 201, two shots clear of Roger Chapman in third, with Phillip Price and Paul McGinley sharing fourth.

The Tour now heads north for the second leg of the seasonal finale, the MCB Tour Championship – Seychelles. Chapman needed a top three finish to leap into the top 29 in the rankings who qualify for that event and he achieved it with a 20-foot birdie on the 17th green.