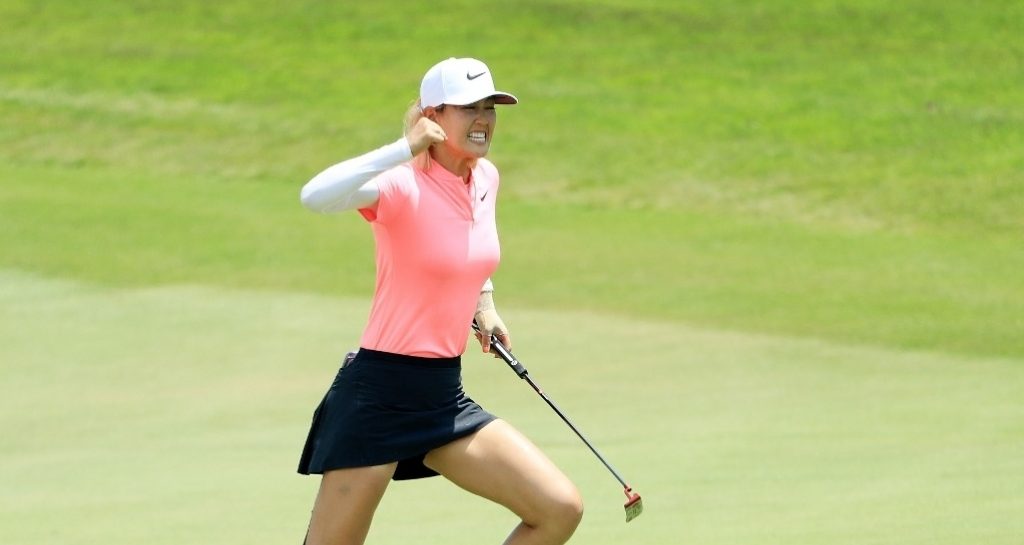 Michelle Wie stormed to victory at the HSBC Women’s World Championship after draining a monster putt from off the green on the final hole.

Fighting for the title on the back nine with as many as six other players as a play-off seemed likely, Wie brought the tournament to a hasty and triumphant conclusion by holing an incredible and unlikely birdie putt at the 18th.

American compatriots Danielle Kang and Nelly Korda, South Korea’s Jenny Shin and Canada’s Brooke Henderson all had to settle for a share of second place.

Wie ultimately closed with a seven-under-par 65 to finish on 17-under 271 for the tournament and clinch her fifth LPGA title.

“It was crazy, I still don’t know what’s going on right now, my head’s running at a million miles an hour,” said Wie, who also held the the lead heading into the final round of this event last year.

“I wanted to win really badly, especially after what happened last year, I had some unfinished business. I knew if I shot seven, eight under I’d have a chance and that was my one and only goal.”

Wie had been winless since her maiden major victory at the 2014 U.S. Women’s Open, and it was clear how much the victory meant to her.

After sinking the winning putt, the 28-year-old pumped her fist and galloped towards the green, providing the LPGA Tour with its most exciting conclusion for some time.

Despite the ecstatic finish, Wie still had a nervy wait for the final group to complete the final hole. Overnight leader Nelly Korda had a nine-footer on the 18th green to force a play-off but it didn’t drop.

Had the teenager won she would have followed up her sister Jessica’s win in Thailand last week.

Earlier, Jenny Shin had seemingly put one hand on the trophy after racing into the lead with eight birdies in 11 holes, but a disappointing bogey at the last gave hope to the final groups behind her.

Instead it was Wie who was left to savour a victory sealed in the most thrilling of fashions – much to the delight of those that backed the outcome using golf odds from Paddy Power.

“It’s been a while since I stood up here so it feels pretty good,” Wie added. “We consider this to be Asia’s major and to win this event means the world to me.”