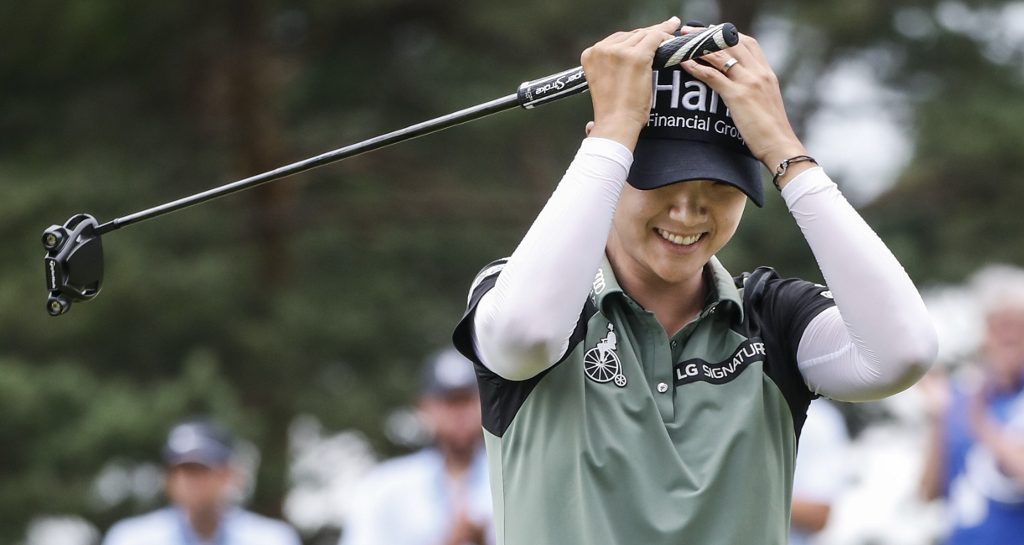 Park started like a house on fire at Sentosa Golf Club’s Tanjong Course on Sunday, draining five birdies in her opening seven holes to rocket up the leaderboard.

Sung Hyun Park makes ANOTHER birdie on No. 7 to take a share of the lead with Minjee Lee at 12-under.

A bogey at the eighth halted her progress momentarily but she resumed her excellent play on the back nine, adding further birdies at the 10th, 13th, 14th and 16th to power to an ultimately unassailable lead on 15 under par.

#LPGAWinnerSelfie with Sung Hyun Park at the HSBC Women's World Championship. It's her 6th winner's selfie of her LPGA career. pic.twitter.com/y5Ew02YhxK

Park was helped by the fact that her closest rival, World No 1 Ariya Jutanugarn, shot a disappointing 75 to finish down in eighth place, having held the overnight lead at the start of the day.

Jutanugarn’s partner in the final pairing, Minjee Lee, finished in second place two shots back after a solid but unspectacular 69.

Park is known as a bit of an enigma who frequently blows hot and cold. She can make birdies almost at will only to capitulate just as mysteriously. In the second and third rounds earlier this week, she added a combined nine birdies on the front nine, but then made six bogeys on the back.

Check out this #LPGAHotRound by Sung Hyun Park during the final round of the HSBC Women's World Championship.#NECLPGAStats @NEC pic.twitter.com/lT51k3PmaF

On Sunday, however, she was able to deliver the goods consistently throughout her round to complete a well-deserved two-stroke win.

“I’m really happy with the way I played today and I didn’t know my first win of the year would come so early,” Park said.

“Usually I will take off in the earlier part of the season but with this early win, I think I will play pretty comfortably for the rest of the season.”