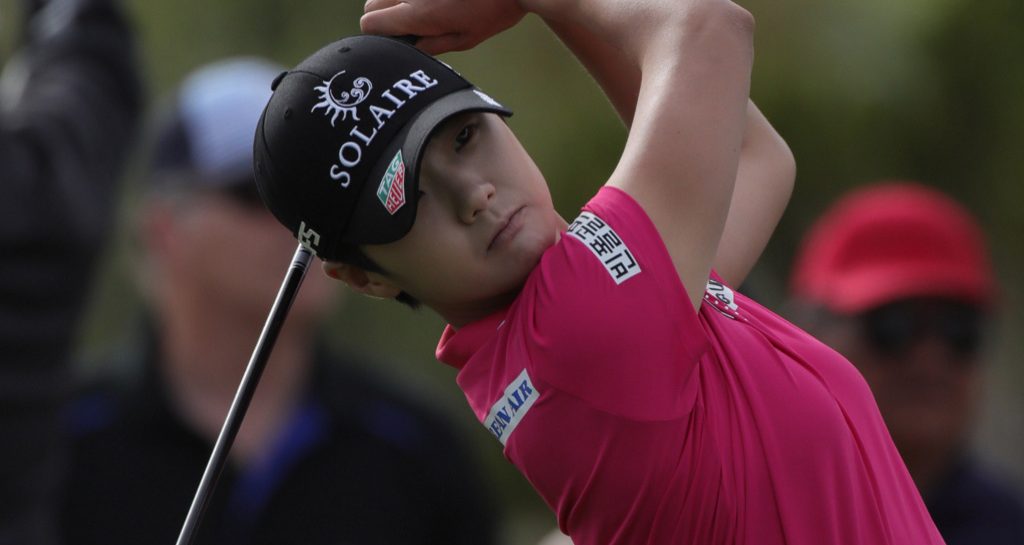 Newly-minted World No 1 Sung Hyun Park is back in familiar territory after grabbing a share of the lead at the halfway mark of the Kia Classic.

Park, who returned to the top of the rankings after capturing her sixth LPGA title at the HSBC Women’s World Championship earlier this month, fired a six-under-par 66 at Aviara Golf Club in Carlsbad on Friday to grab a share of the lead with Thailand’s Thidapa Suwannapura on 10 under par.

The 25-year-old picked up two birdies in her first nine holes and then made a big move with four birdies in the space of five holes after the turn.

Sung Hyun Park birdied 4 of the first 5 holes on the front nine on her way to a bogey-free 66. She's currently tied for the lead at -10!#NECLPGAStats #LPGAHotRound @NEC pic.twitter.com/SamKC8QgmD

“Overall, I’m pretty happy with my play today, especially the bogey-free two days in a row,” said Park, who is a superstar in her native South Korea. “The course is not easy actually. The fairways are pretty narrow and the greens are very soft and line is pretty hard to see for me.”

"My goal for this year was five wins, and I've had one so far. So four more to go."

Sung Hyun Park is trying to chase down win number two on the season, and currently has a share of the lead at -10.

Thidapa made three birdies on each side to also sign for a 66 and join Park on 10-under 134.

“Those greens are not that easy,” she said. “Just play solid and hopefully keep making birdies.”

The duo are one stroke clear of overnight leader Chella Choi, who carded a 70, and fellow South Korean Inbee Park, who shot a 67.

“It was a really good day out there,” said Inbee. “My putter really worked well. Hit the ball pretty solid last couple days.”

Australian Minjee Lee and Colombia’s Mariajo Uribe follow two shots further back in a tie for fifth after a pair of 69s.