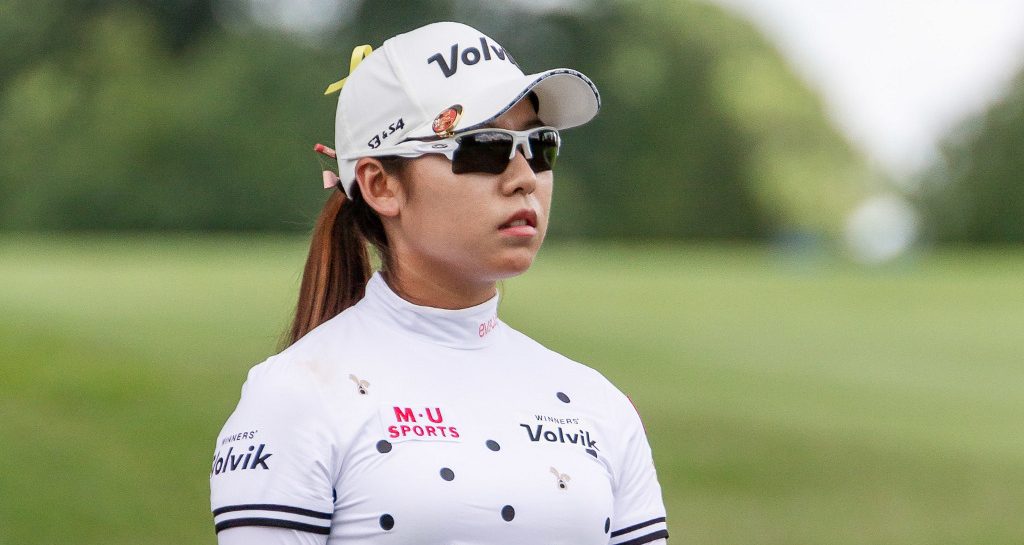 Mi Hyang Lee leads the way at the Evian Championship in France after a second-round 67 that had a little bit of everything.

The 26-year-old South Korean was one of the lucky early starters unaffected by Friday’s storm delay at the Evian Resort Golf Club, and her 10-under-par total of 132 would end up still leading the way by the end of the day.

Lee started her round in fine fashion with back-to-back birdies, but then gave both shots back following a nasty double-bogey on the par-5 ninth. The best was still to come, however, as she bounced back with a superb birdie-birdie-eagle finish on 16, 17 and 18 to soar to the top of the leaderboard.

Lee, who has never won a major championship, faces some stiff competition for the title this weekend, however.

Three more South Koreans lie just one shot behind, all of them former major winners: current World No 1 Sung Hyun Park, former World No 1 and seven-time major champion Inbee Park and Hyo Joo Kim, who claimed her only major title at the Evian Championship in 2014.

Sung kept herself in the hunt with a five-under-par 66, as did Inbee with her 68, while Kim made the day’s biggest move courtesy of a superb 64.

.@Rolex Rankings No. 1 Sung Hyun Park says her putter has been the key to her consistency through two rounds @EvianChamp.

She spoke with our @KentPaisley following her 5-under 66. She's 9-under overall. pic.twitter.com/mo8X84hpQa

“I think my putting went really well, that’s why I was able to play so consistently,” said two-time major winner Sung.

“I am not 100 percent satisfied with the way I played the back nine today but I will focus more on that going into the third and fourth rounds.”

It was not a good day for for first-round leader Paula Creamer, however. The American endured a torrid time on the back nine, dropping seven strokes in the space of five holes as she went bogey-bogey-bogey-triple-bogey-bogey.

Added to that calamitous stretch were two birdies and 11 pars as she signed for a 76 to fall eight shots off the pace.

Lexi Thompson, meanwhile, missed the cut after rounds of 77 and 72 and didn’t have many nice things to say about the course, taking to Instagram to voice her displeasure with the conditions.

“So Evian, where do I begin…I’d be the first to tell you that I hit it like 💩 the first day and missed everything. Not one to make excuses, but to land 3-4 drives in the middle of fairway and end up in the rough like the one pic with a stance like that, or get a first cut lie like this one, what is this telling you? And to play well today hit one bad golf shot but hit 3 iron shots right at the pin 5 ft at one point then end up 40+ ft….umm really? I’m actually very thankful that I don’t have to put myself thru that for another two days. You’re a beautiful place Evian but that’s just too many bad breaks with good shots for me, so bye @evianchamp ! #justnotforme #allgood #onward”